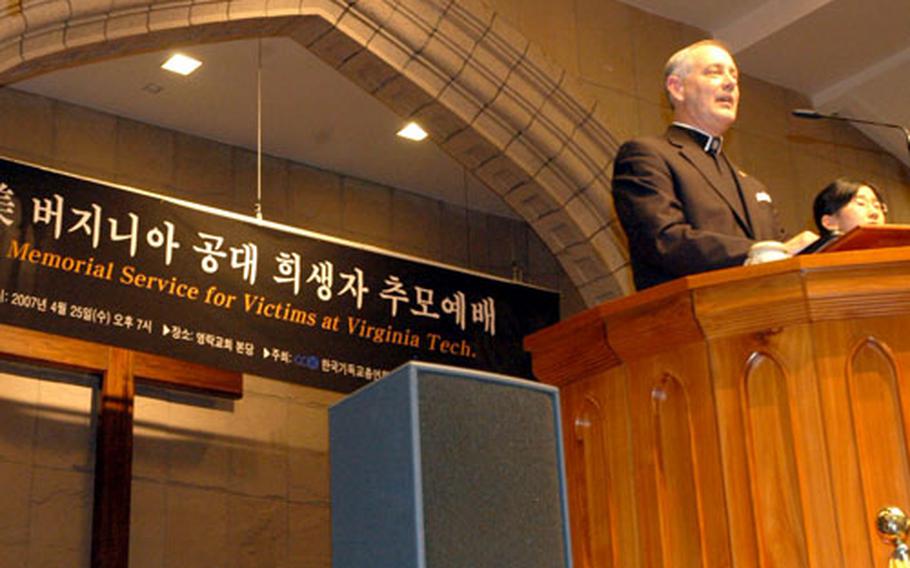 SEOUL &#8212; Members of the Yongsan Garrison community gathered with churchgoers from throughout Seoul at the YoungNak Church on Wednesday night to mourn the victims of the April 16 Virginia Tech shooting spree.

Among those participating in the ceremony were representatives from U.S. Forces Korea, the U.S. Embassy in Seoul and churches from throughout the Seoul area.

The Christian Council of Korea sponsored the event, which featured hymns, prayers and speeches by various community members and clergymen.

Event moderator Rhee Kyang-sun said organizers thought it was important to hold a memorial service for a number of reasons.

&#8220;We wanted to share the sadness of the students and of all Americans who are in great grief because of this tragedy,&#8221; he said. &#8220;Not only because the shooter was Korean, but because in a worldwide way we are in great grief.&#8221;

He compared the American reaction to the recent shootings to the Korean reaction when American soldiers accidentally ran over and killed two South Korean girls in 2002.

He said that even though the 2002 tragedy was an accident, many Koreans reacted by holding demonstrations and demanding the removal of U.S. forces from Korea.

USFK command chaplain, Col. Samuel Boone, said the event was held partially to alleviate the collective guilt many Koreans feel over the shootings.