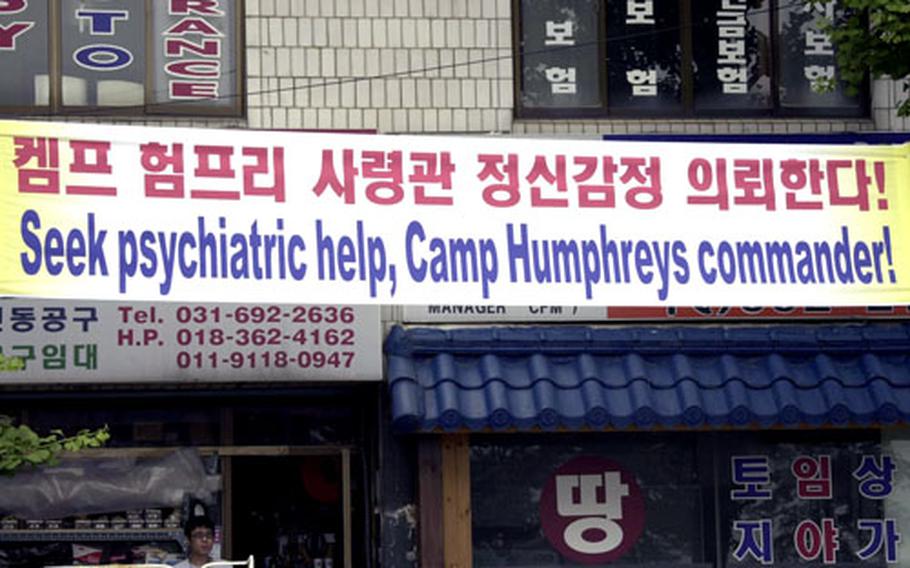 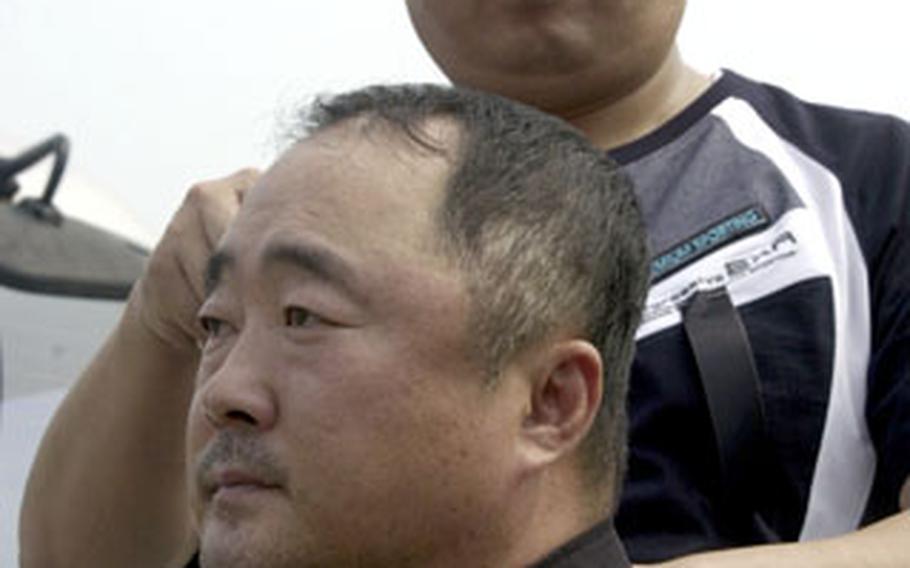 Yi Hun-hui, president of the Korea Foreigner Tourist Facility Association, has his head shaved to protest Col. Michael Taliento Jr. during a protest outside of Camp Humphreys on Tuesday. (T.D. Flack / S&S)

Clad in black, with white armband and hat, Yi explained that he wasn&#8217;t mourning his own father. Instead, Yi said, he was mourning the loss of Col. Michael J. Taliento Jr.

As commander of Area III, which includes Camp Humphreys, Taliento is &#8220;like a father&#8221; to the members of local South Korean community, Yi said. Yi is the president of the Korea Foreigner Tourist Facility Association.

Yi spoke to Stars and Stripes following a 30-minute demonstration outside the base gates Tuesday afternoon. About 200 people, mainly women who work the bars frequented by U.S. soldiers during off-duty hours, called for Taliento&#8217;s resignation.

Yi, sitting with an entourage of local business leaders, claims Taliento isn&#8217;t working with the bars in enforcing a policy that sets the drinking age for servicemembers at 21. In South Korea, the legal age is 20.

Taliento, reached via cell phone Tuesday afternoon, said he is aware of the request but there is &#8220;not an easy answer to that question.&#8221;

But Taliento pointed out that underage troops are allowed into on-base clubs.

But Yi said Taliento should take a closer look at on-base problems before cracking down on Anjung-ri. Underage soldiers are already drunk when they&#8217;re leaving the base, Yi said.

He said he&#8217;s not really sure the local people can cause Taliento to resign, but he said they&#8217;ll continue trying. And if Taliento doesn&#8217;t resign, the group will take increasingly extreme measures, like joining anti-American groups who have protested, sometimes violently, in opposition to the U.S. expansion in the Pyeongtaek area.