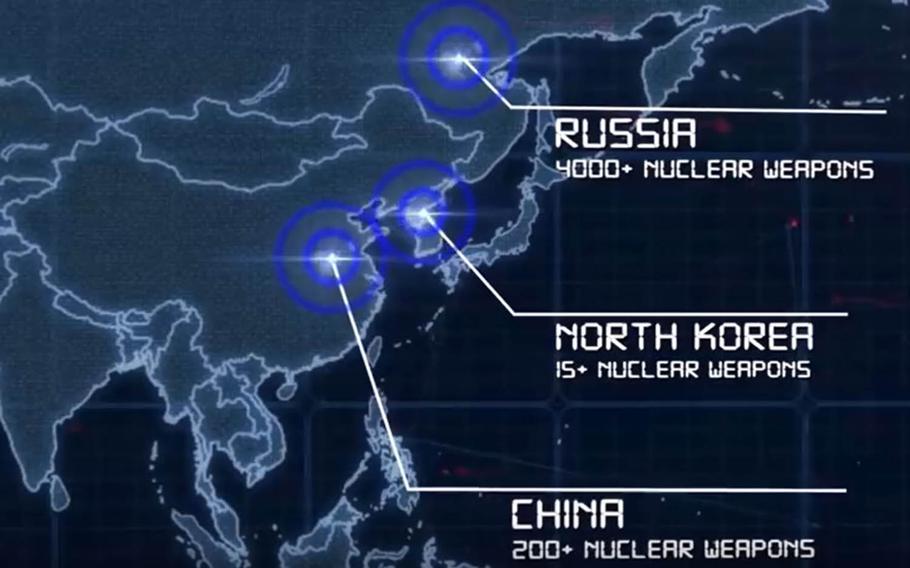 U.S. Forces Japan said Friday, Jan. 18, 2019, that it planned to edit an online video to clarify that North Korea is not recognized as a nuclear state. (Screenshot from YouTube)

YOKOTA AIR BASE, Japan — The United States does not recognize North Korea as a nuclear state, a U.S. Forces Japan spokesman said Friday, clarifying an online video in which the command refers to the communist country as one of three nuclear-armed nations in the Far East.

“The waters of East Asia touch two of the world’s top three economic powers and three declared nuclear states,” a narrator says in the video posted on YouTube a month ago.

South Korea’s Yonhap news agency reported Thursday the video “has reinforced speculation that Washington might be considering acknowledging Pyongyang as a de facto nuclear power should the communist regime forgo its long-range missiles capable of striking the continental U.S.”

USFJ spokesman Air Force Col. John Hutcheson said in an email Friday that the video was intended to inform and educate U.S. and Japanese audiences about the importance of the U.S.-Japan alliance and the critical role USFJ has in maintaining the peace and stability of a complex region.

The portion of the video that addresses the regional security situation and North Korea specifically in no way was intended to signal any change in U.S. policy, he said.

“The United States does not recognize North Korea as a nuclear state,” he said. “Given the sensitivities in the region and the importance of providing accurate information, we will be editing that portion of the video to make the language more precise. Our goal, and the goal of the entire international community remains the final, fully verified denuclearization of North Korea.”