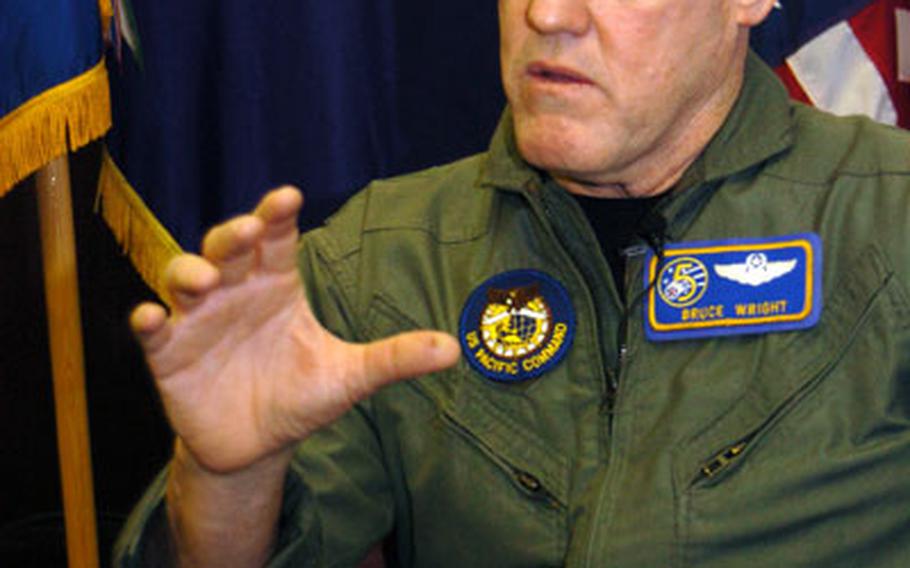 Lt. Gen. Bruce Wright, commander of U.S. Forces Japan and the 5th Air Force, talks Monday about the strengthening relationship between the U.S. and Japanese militaries. Wright said exercises such as Keen Sword and Keen Edge have made the two militaries much more interoperable than in the past. (Teri Weaver / S&S)

YOKOTA AIR BASE, Japan &#8212; Planned military moves by both the U.S. and Japanese forces remain on schedule, including changes that will put Japan&#8217;s air defense headquarters at Yokota and will move a Navy air wing south to Iwakuni, according to the commander of U.S. Forces Japan.

Lt. Gen. Bruce Wright talked about these upcoming changes this week as he praised what he called the strengthening relationship between the two countries.

&#8220;I think we can expect to build on that success in the future,&#8221; said Wright, who will leave the command in February after three years as the top U.S. officer in Japan.

Wright said that Japan&#8217;s decision to continue paying for the U.S. presence here has helped ensure quality-of-life standards for servicemembers and their families.

Early last year, Japan officials had balked at continuing to pay for U.S. utilities and new buildings in an effort to trim their own national budget. In the end, the two countries negotiated a three-year agreement that kept the Japanese contributions close to past levels.

&#8220;We&#8217;ve been able to hold host-nation support at a relatively healthy level, to include construction of facilities as well as Japanese support for labor on our bases and things like utilities,&#8221; Wright said. &#8220;That gives us community quality that matches, in many ways, the U.S. standard.&#8221;

Wright, who also is 5th Air Force commander, praised recent exercises with Japan, saying they have helped the two militaries operate together more closely than in the past.

Exercises such as Keen Sword and Keen Edge are &#8220;unprecedented in their realism and also in our ability to do things like use modern information technology to be better coordinated and provide more timely, accurate flow of information between our two militaries,&#8221; Wright said.

The countries also have shared more information about their missile defense systems during the past two years, Wright said.

Japan&#8217;s Air Defense headquarters are scheduled to move to Yokota by 2010. And the data gathered at the United States&#8217; radar site on the northern tip of Honshu Island is connected into common operational plans, he said.

&#8220;We&#8217;re constantly working through improving our coordination capabilities,&#8221; Wright said. &#8220;We have to always be cognizant of the Japanese constitution and that we stay within their policy constraints.&#8221;

But the countries do practice scenarios that involve sharing that information, Wright said.

Wright will retire in February. His replacement will be Lt. Gen. Edward A. Rice, the current Pacific Air Forces vice commander at Hickam Air Force Base in Hawaii.