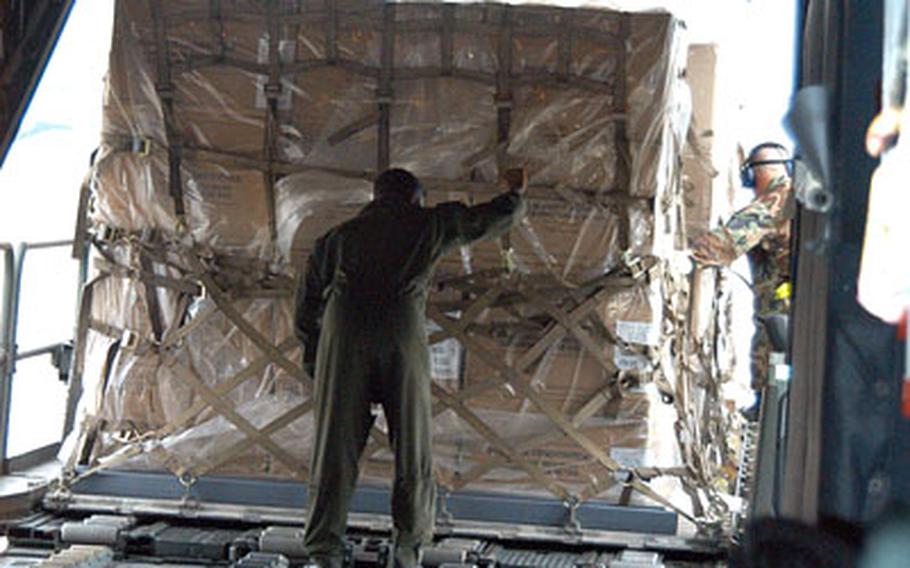 Airmen at Yokota Air Base, Japan, load pallets of drinking water and air conditioners into the cargo bay of a C-130H on Wednesday as it prepares to leave for Niigata prefecture, the site of a magnitude 6.8 earthquake on Monday. (Bryce S. Dubee / S&S)

The delivery of relief supplies after a 6.8-magnitude earthquake Monday killed nine people, injured more than 1,000 and left thousands homeless was made following a request from the Japanese government, said Maj. Neil Murphy, a U.S. Forces Japan spokesman. He said more deliveries would be made over the next few days.

The air conditioners had been in storage at Yokota in case of just such a disaster, while the water was provided by the commissary through donations by military sales brokerages WEBCO and C. Lloyd Johnson Company Inc., Murphy said.

Accompanying the supplies to Niigata were J. Thomas Schieffer, the U.S. ambassador to Japan, and Lt. Gen. Bruce A. Wright, commander of U.S. Forces Japan. Both met with members of the Japanese government and local leaders as the supplies were being delivered.

Niigata prefecture governor Hirohiko Izumida expressed deep thanks for the supplies. He was especially appreciative of the air conditioners, he said, due to concerns for elderly residents living in shelters during the hot and humid weather of Japan&#8217;s rainy season.

Recalling how the Japanese people reached out to help Americans after Hurricane Katrina struck the Gulf Coast in 2005, the ambassador said Wednesday&#8217;s delivery to Niigata was just a &#8220;small gesture to say thank you and to show how grateful we are for helping us in our time of need.&#8221;

Schieffer also authorized the disbursal of $100,000 in disaster relief to the area, according to a Tuesday press release from the U.S. Embassy.

As of Wednesday, around 10,000 people were living in shelters throughout the area, said Niigata Mayor Akira Shinoda, but many were expected to be able to return home by the weekend. Electricity had returned to most of the area Wednesday, but water and gas were expected to take longer to

Three members of the Yokota-based aircrew that delivered the relief supplies to quake-stricken Niigata prefecture were asked how they felt about taking part in the mission:

Senior Airman Dwayne Sariol, loadmaster, 36th Airlift Squadron: &#8220;We were just supposed to have training today,&#8221; Sariol said, adding that he had heard about Monday&#8217;s earthquake, but had no idea he would be participating in the airlift mission to deliver relief supplies until he arrived at work Wednesday.

Sariol has been working with transport aircraft for nearly four years, but he said this was the first time he has done a mission like this.

Staff Sgt. Jesse T. Reeson, flight engineer, 36th Airlift Squadron: Reeson also said this was his first time participating in an airlift of relief supplies, adding that he is glad to have had the chance to do so, especially in Japan.