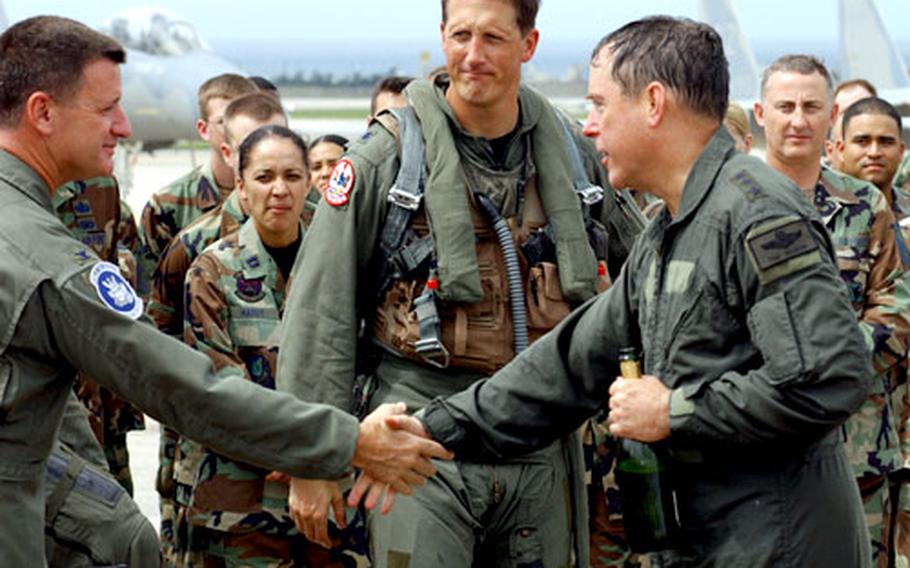 As Lt. Gen. Thomas C. Waskow taxied to a spot in front of the passenger terminal, two firetrucks sent streams of water arching over his plane. Waskow was greeted by a large formation of Kadena troops.

As he stepped from the plane after the 90-minute flight, Waskow, who also serves as the 5th Air Force commander, was given the traditional soaking with two fire hoses. He bolted to one of his attackers, his aide-de-camp, Capt. Dana Metzger, and turned the hose on him.

Waskow shook hands with the airmen who had come out to pay their respect and then gave a short speech.

Waskow has seen his troops&#8217; mission broaden from their traditional role in the Pacific to a worldwide mission since taking command in November 2001.

&#8220;I believe that the response of our troops and USFJ [to the global war on terrorism] has been incredible,&#8221; he said. &#8220;We&#8217;ve contributed forces to Operation Enduring Freedom and Operation Iraqi Freedom, and in fact, III MEF has young Marines with their boots on the ground in Iraq today. So the way that we have stood up to the challenge has been a great source of pride for me, and doing that in addition to our prime job, which is supporting the defense treaty with Japan, has truly been a great source of pride for all of us at the senior levels of the military.&#8221;

Waskow said the highlight of his tour is the relationship he and his staff have built with their Japanese counterparts. He said he&#8217;s also proud to lead his troops.

&#8220;My initial goal was to be a fighter squadron commander &#8230; I did that, and following my retirement next month I will have been able to say that every assignment I&#8217;ve had since I was a lieutenant colonel had the word commander in my duty title,&#8221; he said. &#8220;And so for me being able to serve my country with the responsibility of our most precious resource &#8212; our young soldiers, sailors, airmen and Marines &#8212; that is an honor I can just barely describe.&#8221;

He was part of a group of four F-15s from the 67th Fighter Squadron that conducted two-on-two aerial combat training for a little more than 30 minutes.

Waskow, and his wife, Sheila, have spent all but 20 months since 1989 at overseas bases. Waskow&#8217;s first goal is to have Thanksgiving dinner with all their children and grandchildren, something they haven&#8217;t done in 15 years.

He said he&#8217;ll keep rooting for the men and women in uniform.