Used to sea duty along U.S. shores, Coast Guard has adapted to role in Middle East 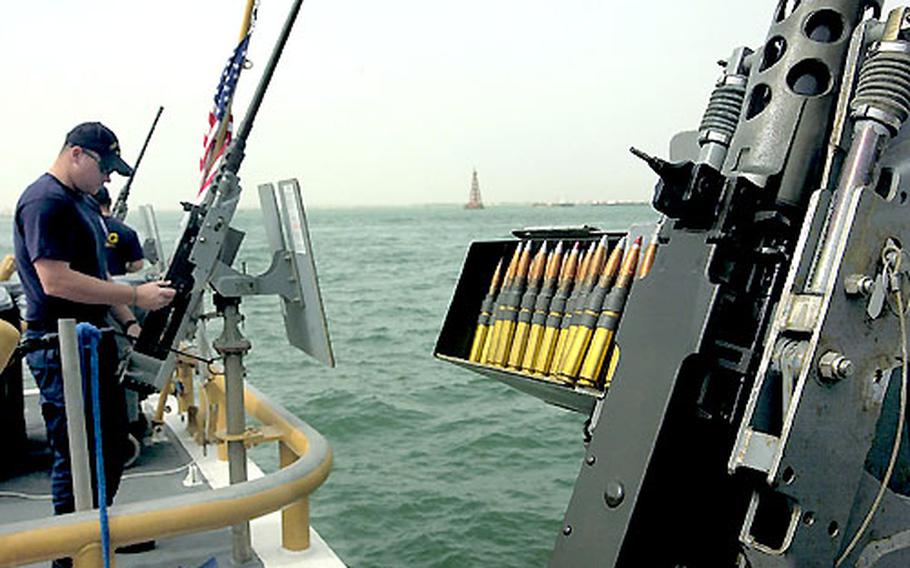 Not since the Vietnam War has the U.S. Coast Guard participated so heavily in combat action.

During Operation Iraqi Freedom, the nation&#8217;s smallest military force, part of the new Department of Homeland Security, contributed 650 people and a dozen vessels to patrol and protect ports and waterways around the Arabian Sea.

The Coast Guard captured prisoners, seized weapons and responded first when two helicopters collided midair during the first days of the war.

Its ships sailed near mines and through enemy fire to lead humanitarian ships and even minesweepers into Iraqi waters.

In honor of their work, President Bush awarded the captains of four 110-foot cutters the Bronze Star Medal for &#8220;meritorious achievement in connection with combat operations against the enemy.&#8221;

Harrison recalls one incident that demonstrated the maturity of her crew.

One night, a small boat with no lights approached and the crew had to decide whether to attack. Relying on instinct, the crew resisted. It was a Navy SEAL boat.

Coast Guard Cutters patrolled in two areas: near the Iraqi oil terminals on the Persian Gulf, and the Khawr Abd Allah River that leads to port city Umm Qasr.

The crews escorted ships and guarded the waters. They worked closely with other nationalities &#8212; British, Australian and, sometimes, Iraqi. They stopped and searched every vessel they encountered.

They looked for illegal contraband, weapons of mass destruction, escaping criminals. The dhows, Iraqi fishing boats, were filthy and crowded. They had to search every man-size space.

Petty Officer 1st Class David Christiansen, a quartermaster on the cutter Baranof from Miami, remembers the bombs exploding ashore in the early days of the war.

Lt. Christopher Barrows, commander until last week of the cutter Wrangell, based in Portland, Maine, said it&#8217;s easy to explain the Coast Guard&#8217;s mission to people back home. But you can&#8217;t really convey the conditions and feelings on board.

The crewmembers&#8217; job was similar to what they do back home &#8212; dealing with civilian vessels and patrolling for security.

&#8220;It&#8217;s kind of ironic: As soon as we come under Homeland Security, we come over here,&#8221; said Petty Officer 2nd Class Brian Truax, a gunnersmate from Weirton, W.Va., stationed on the Wrangell.

The second night of the combat, the crew of the Aquidneck witnessed one of the earliest catastrophes of the war, when two coalition helicopters collided in midair. The crew on watch saw the collision and raced to the scene to search for survivors.

During the weeks the followed the start of the ground war, the crews tried to make the most of the long tours and little space. With 18 bunks and 22 people, every bit of space on board was accounted for. Cutters often go out for a few days but during the war, they would be at sea for two weeks at a time. Supplies ran low.

But the small ships came in handy. They maneuver easily and their crews are used to being self-contained and self-sufficient.

Threats came in all directions &#8212; from wrecks in the channel where Iraqis hid, other boats, fire from ashore, rocket-propelled grenades, mines, collisions and torturous navigation.

While the combat experience is over, many of the cutter crews are still patrolling. Their experience, Hull told them at the Bronze Star ceremony, may not be apparent for years.

That thought isn&#8217;t lost on crewmembers.