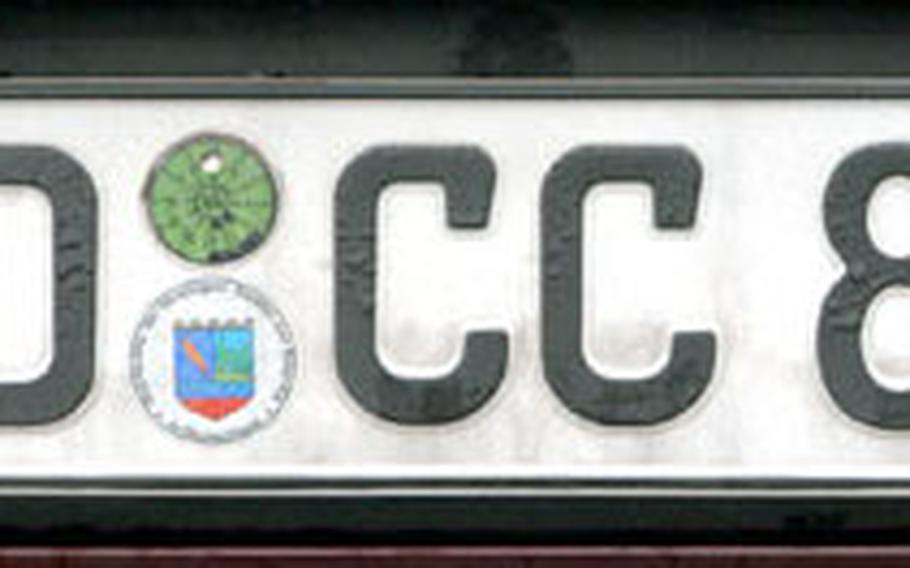 The Army is doing away with the “USA” license plates, top, citing force protection. The German plate, above, has the European Union symbol and a D for Deutschland (Germany). The changes, to be phased out over two years, will start in December. (Michael Abrams / S&S)

Your 2-ton dually may soon blend in a little better on German roads, thanks to a U.S. Army Europe plan to phase out &#8220;USA&#8221;-bearing license plates for German ones.

The move, which could begin as early as December, will affect all 103,000 American-owned vehicles in the country. No extra fees or procedures will arise as a result of the change.

Under the plan, servicemembers and civilians in Germany will jettison their seven-digit American plates for seven- or eight-digit German plates. Like German license plates, the new plates also will have a two-letter code identifying the city where the owner lives, making them essentially indistinguishable from local license plates.

The change is a result of an agreement between U.S. forces and the German government that allows the cars to carry German plates without having to pay German road taxes or undergo German inspections.

Registration currently costs $15 per year and will likely remain at that rate through the end of the year, Lorenzini said.

Those who want to keep their American license plates can do so for one registration period: either for one or two years, depending on the car&#8217;s age.

However, those whose registration expires before the new plates are available won&#8217;t be able to get them until their next registration period. For some drivers, that could take up to two years.

The reason for the change, Lorenzini said, is to afford Americans a little extra anonymity on the road.

Similar transformations were implemented for similar reasons in Italy and South Korea in 2004.

Lorenzini said, however, that he&#8217;s heard of no incidents of Americans in Germany being targeted by license plate.

However, he said, Americans traveling outside of Germany &#8212; possibly into areas where Americans are not looked upon kindly &#8212; could benefit from the change.

Several soldiers in the Darmstadt area expressed approval for the plan.

&#8220;It&#8217;s easy enough to pick out American cars now with it right on the plates,&#8221; said Champlin, of Company A, 2nd Military Intelligence Battalion. &#8220;With German plates, we would blend in more and it would be more difficult to figure out whether the car is American or German.&#8221;

But will slapping a German license plate on a Ford F-350 Super Duty Crew Cab camouflage it among the legions of Opels and Skodas prowling the autobahn? Don&#8217;t count on it, Lorenzini said.