USAREUR soldiers to take part in international march in the Netherlands 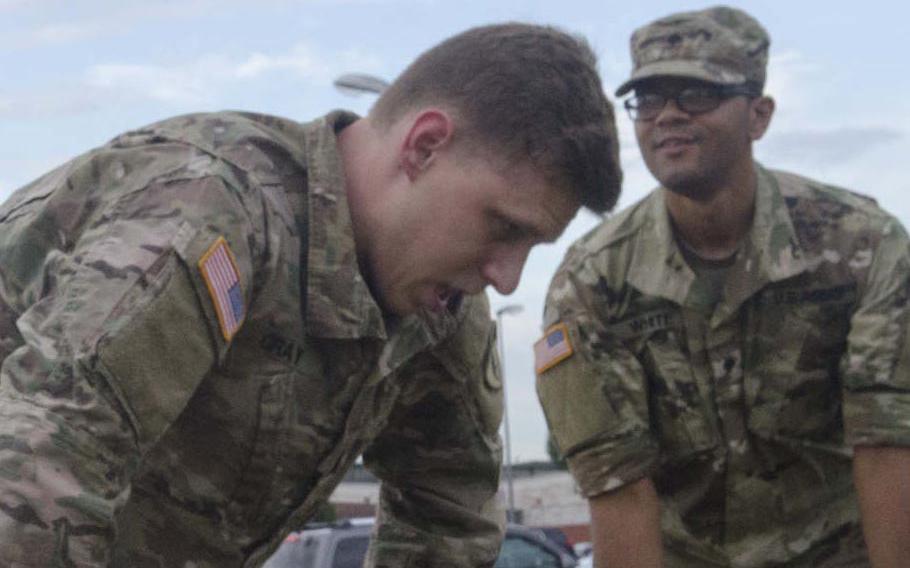 First Lt. Justin Gray, left, a field artillery officer and Spc. Lougan White, a paralegal specialist, rest after a 3.5-hour march July 14, 2017, at Clay Kaserne in Wiesbaden, Germany. Gray and White are part of an 11-soldier team that will take part in the International Four Days Marches in Nijmegen, Netherlands, July 18-21. (Dan Stoutamire/Stars and Stripes)

WIESBADEN, Germany — A group of soldiers from U.S. Army Europe has been rising as early as 3:30 a.m. at least once a week, preparing since March for four days of extreme exertion set to kick off on Tuesday.

Ten American soldiers and one German officer from the Wiesbaden and Kaiserslautern military communities will represent the command at the International Four Days Marches in Nijmegen, Netherlands.

They’ll march 100 miles in four days through the Dutch countryside wearing rucksacks of no less than 10 kilograms (22 pounds).

The march, the largest such annual event in the world, includes both civilians and military personnel.

“It’s not only training your muscles a bit but it’s also beating up your feet,” he said. “That’s the key, if you get blisters on day one of the march, you’re in trouble. It’s about figuring out the right recipe for you to be successful.”

In recent decades, hundreds of U.S. military personnel have participated in the march. About 5,000 military personnel from all over the world are expected to take part in this year’s event, said Turman, who works in USAREUR’s executive service division in Wiesbaden. Turman’s team will be sharing accommodations with them in Nijmegen’s Kamp Heumensoord, where the Dutch army will provide food and other services.

A total of 47,000 marchers are expected — about as many as last year — according to the event’s webpage. Last year, nearly 7,500 did not complete the event.

Each day, marchers will leave Nijmegen and take a different route through the countryside. Each day’s march named after the largest town passed through — Elst, Wijchen, Groesbeek and Cuijk. After making their loop, marchers will return to Nijmegen for the evening.

Turman, who will be making his second march, said he’s interested in getting to know his international colleagues over the coming week.