USAREUR selects its NCO, soldier of the year 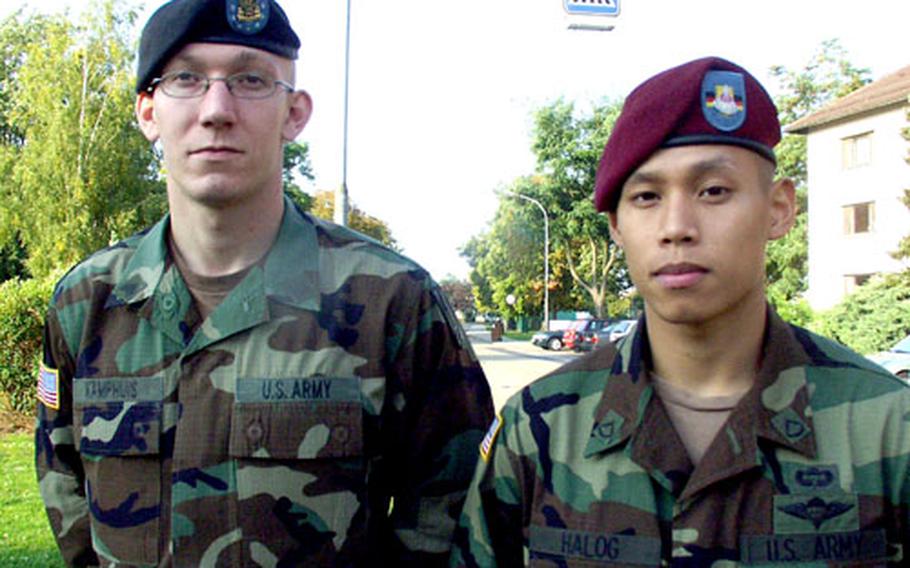 They ruck-marched, tossed hand grenades and evacuated Germans pretending to be injured from a pitch-black basement. They did push-ups, shot their M-16s and navigated their way around Grafenw&#246;hr for 12 hours using only compasses, protractors and maps.

According to a board of U.S. Army noncommissioned officers watching them perform, Pfc. James Halog and Sgt. Jeremy Kamphuis did it best.

The two were named Soldier of the Year and NCO of the Year, respectively, for U.S. Army Europe at a banquet Tuesday night in Heidelberg, Germany.

The awards came after three grueling days of tests at Grafenw&#246;hr earlier this month, and, they both said, many, many months, at least, of striving always to do their best.

Halog, 20, a parachute rigger with the 5th Quartermaster Detachment in Kaiserslautern, Germany, who has been in the Army for 17 months, was soldier of the month when he was still in parachute-rigging school and later was his company&#8217;s soldier of the year.\

Kamphuis, who hails from Grand Rapids, Mich., and says he is the sole person from his high school class to have joined the military, had just returned from a year in Baghdad. There, he had helped train Iraqi police &#8220;to make [the force] a more effective and efficient organization that the Iraqi people can trust,&#8221; as he put it. That went well, he said, but he was still a bit out of shape just before the competition was to begin.

Halog, from the San Francisco Bay area, said he&#8217;s always taken to heart the warrior ethos, which he recites when asked.

Neither one is certain whether the Army will be a career or just a temporary adventure. Halog says he thinks the military has given him discipline and maturity, and he likes the life.

Kamphuis, who went active duty in part because he knew he&#8217;d be deployed to Iraq anyway, has earned a bachelor&#8217;s degree in criminal justice. He said he will be re-enlisting. After that, though, he said, &#8220;The future is hard to predict,&#8221; and he&#8217;s been thinking about a career in federal law enforcement.

The two competed against five other soldiers or NCOs of the year from U.S. Army Europe commands. There would have been eight contestants, but one had been injured.

Kamphuis and Halog are now preparing for the Army-wide competition that starts Sept. 26. In that, the two will compete with 32 others.

The USAREUR awards came with numerous prizes, including savings bonds and round-trip airline tickets to the States.

Rising to the top

Here are the runners-up for U.S. Army Europe Soldier and Noncommissioned Officer of the Year: