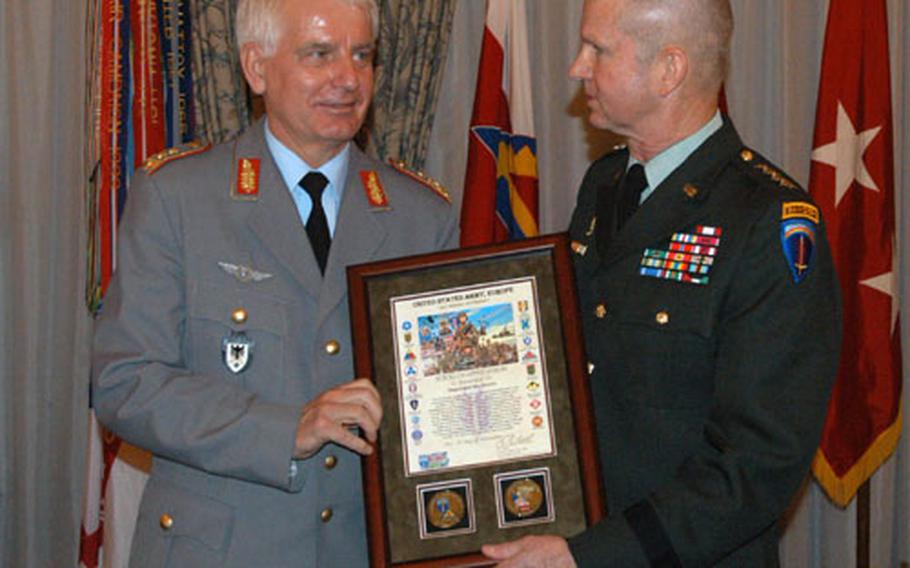 HEIDELBERG, Germany &#8212; The Army&#8217;s senior officer in Europe this week thanked German military and police for helping guard U.S. bases &#8212; a mission Germany&#8217;s top army officer said is taxing his resources but one he will manage.

During a ceremony Wednesday at Patrick Henry Village in Heidelberg, Gen. B.B. Bell, commander of U.S. Army Europe and 7th Army, recognized about 70 senior officials from the German military, border and local police.

Bell presented each with a decorative certificate in a frame and thanked them on behalf of his soldiers and their families.

&#8220;I&#8217;ve been getting a lot better sleep at night than I was before,&#8221; Bell told German leaders. &#8220;Thank you for making my installations places where we have confidence we are safe and secure from any potential terrorist activity.&#8221;

Since January, as troops from U.S. bases in Europe began deployment to Southwest Asia, German soldiers have been helping check identifications at gates and patrolling posts.

Bell said he has visited nearly every U.S. base in his command and has taken time to meet with German troops on guard.

The German troops will remain at U.S. bases as long as they are needed, said Lt. Gen. Gert Gudera, the German army&#8217;s chief of staff.

He said he was proud to support U.S. families when their loved ones are deployed to combat.

&#8220;I take with me the satisfaction that we gave the people a feeling of being secure, which they deserve,&#8221; he said.

During his speech, Bell mentioned that U.S. troops deployed to Germany during the Cold War to defend Europe from communist forces. Those years working together built a partnership between the United States and Germany.

Now, when the United States needs help, German forces are lending a hand.

Bell predicted that in 50 years a U.S. officer would be in his place, recognizing that partnership.