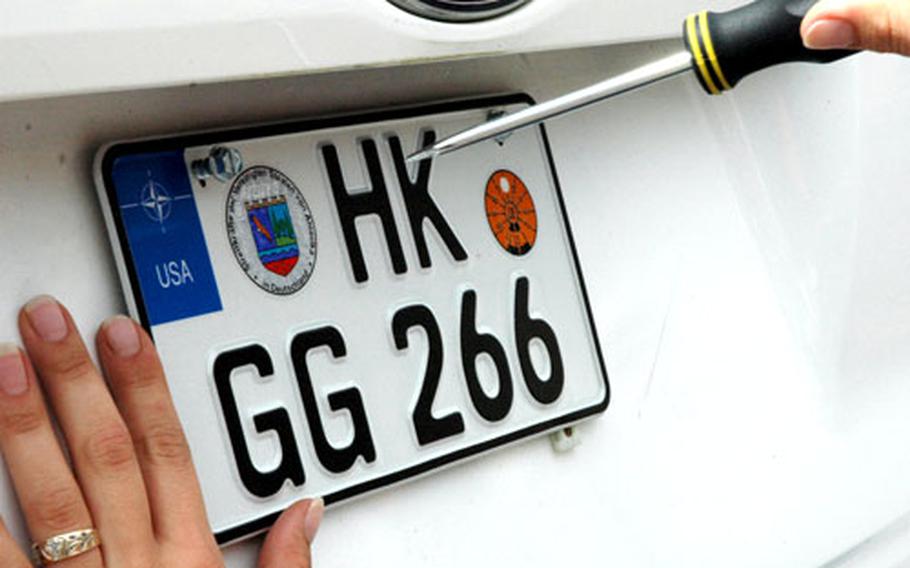 Although U.S. Army Europe has doubled its registration fee to phase in new German-issued plates without the letters “USA” that identify the vehicle as American-owned, most personnel in Germany will continue to get the old license plate at the higher fee. (S&S file photo)

The U.S. military in Germany doubled the vehicle registration fee July 1 to help cover the cost of transitioning to German license plates that carry the letter &#8220;D&#8221; for Deutschland. However, most current personnel, despite paying the higher fee, won&#8217;t get the &#8220;D&#8221; plates, which are to be phased in over several years.

Currently, most vehicles owned by U.S. personnel carry American-issued plates that look German but carry the letters &#8220;USA.&#8221; Officials at U.S. Army Europe said the German plates and registration process cost the military about $90 a set, of which $30 will be paid by individual drivers &#8212; double the $15 they previously paid.

The fee applies to anyone registering vehicles at a U.S. military facility in Germany, not just Army personnel.

U.S Army Europe officials said the new tags are a force protection measure, but they concede the value of that extra security won&#8217;t reach all troops and their families in Germany until as late as 2010. Since vehicle registration is a nonappropriated fund activity, which operates at cost, it depends on money from those registering their cars to pay for the plates and the cost of administering the program.

Some troops have a hard time understanding the way the policy is being implemented and worry that, if force protection is an issue, officials aren&#8217;t moving fast enough to get the German plates to troops.

He agreed there is a benefit to U.S. personnel having German plates, but thinks it is unfair for troops to foot the bill now for the protection of other troops years down the road.

In developing the policy, military officials weighed the impact that the cost of the new tags would have on troops against the force protection they would gain from the plates, USAREUR spokeswoman Elke Herberger said.

Crutchfield said he wouldn&#8217;t mind paying a full, one-time $90 fee if he could get the German plates immediately.

However, Herberger said, &#8220;There are people who probably can afford the $90, but there are probably people who can&#8217;t.&#8221; She said the majority of troops in USAREUR are 18-24 years old and, on average, pull down roughly $2,000 per month in base pay, not including cost-of-living and food allowances or taxes.

At $30, the new registration fee is still less than that paid by most active-duty personnel in the U.S. Many states require emissions testing, vehicle inspections, vehicle taxes and registration fees that can run into the hundreds of dollars.

Raising the fee above $30 could allow the plates to be distributed more quickly, Herberger said. That price was set so the majority of the population can afford to have a vehicle here.

Crutchfield thinks the registration fee, in the context of force protection, is absurdly low, and said that putting a price tag of $30 on a safety measure was &#8220;hogwash.&#8221;

Vehicle registration offices in many U.S. military communities in Germany don&#8217;t have the new plates, and might not see them for years.

She questioned what was different about driving around with a U.S. plate, but said she had never been harassed while in her car, which has a plate identifying it as American-owned.

USAREUR officials would not say which communities would get the plates or when, but confirmed that Heidelberg and Mannheim, the epicenter of Army leadership in Europe, started issuing the plates earlier in the year. The U.S. vehicle registration office in Wiesbaden also said it has the plates.

Want to pay what Germans pay?

U.S. personnel who want the protection afforded by German plates but can&#8217;t yet get the plates through their local vehicle registration office can register their vehicles in the German community in which they live if they have a German street address, officials at the vehicle registration office in Darmstadt told Stars and Stripes. Those who do so would have to follow German rules, which could be cost-prohibitive for most personnel.

Though the costs vary across the country, German citizens in Darmstadt pay roughly 59 euros &#8212; about $75 &#8212; to register their cars and get plates. On top of that, vehicle inspection and emissions testing cost more than 80 euros, or about $110. Locals also have to pay an annual car tax that can run hundreds of euros per year, depending on the engine size and type of fuel used.

In addition to these costs, U.S. personnel registering their vehicles on the German economy must provide a passport.

However, without the &#8220;double white card&#8221; issued to those who register on U.S. bases, personnel who registered through the German system wouldn&#8217;t be allowed to purchase gas coupons or fuel at Army and Air Force Exchange Service gas stations, according to the U.S. vehicle registration offices in Darmstadt and Wiesbaden.

Vehicles registered on the German economy can&#8217;t be registered on U.S. installations without the owner first forfeiting their German registration.

No troops who spoke with Stripes said they were willing to pay what Germans pay to drive.