USAREUR's goal: Flu shots for 90% of its active-duty personnel by year's end 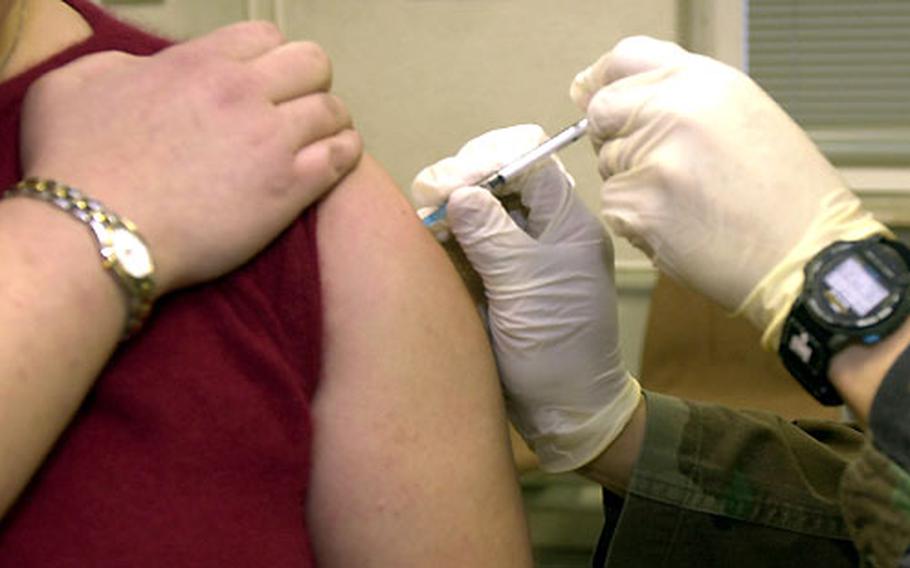 If you&#8217;re a soldier stationed in Europe and haven&#8217;t received an influenza vaccination yet, the chances are pretty good you&#8217;ll be asked to bare an arm in the next few weeks.

Of course, the odds are even better that you&#8217;ve already had that shot.

U.S. Army Europe has a goal of getting at least 90 percent of its 62,000 active-duty personnel vaccinated by Dec. 31.

Col. Allen Kraft, the director of force health protection for the command, said a new tracking program indicates that at least 52 percent of the force has already received the flu shots.

&#8220;The percentage is probably much higher than that,&#8221; Kraft said in a phone interview Wednesday.

Personnel across the theater are still learning the ins and outs of the Medical Protection System, which officials are using to track the shots. And there are likely thousands of inoculations that have yet to be entered into the system.

But officials believe that there are still soldiers, airmen, sailors and civilians who should get the shots in the next few weeks.

That&#8217;s especially true since data from the World Health Organization and the Centers for Disease Control indicates that more and more people are showing signs of the flu.

&#8220;Like it or not, the influenza season is arriving,&#8221; said Lt. Col. Loren Erickson, chief of preventive medicine at Landstuhl Regional Medical Center and a consultant to the Europe Regional Medical Command, which works with all services&#8217; clinics in Europe. &#8220;We&#8217;re starting to see an uptick.&#8221;

Medical officials are hoping there won&#8217;t be a similar swing among military communities in Europe. And that&#8217;s why the shots are given out in the first place.

Erickson said preventing people from getting sick saves the military time and money.

&#8220;For the active-duty military population, it&#8217;s a readiness issue,&#8221; he said. Servicemembers who miss time at work can put a strain on commands that are already stretched fairly thin.

For others, the concern can be a matter of life or death.

People die in the States and Europe every year after contracting the flu. Erickson said those most at risk &#8212; children and adults with chronic heart or lung conditions &#8212; should definitely receive shots, because they&#8217;re the ones often hit the hardest.

Waiting until the flu starts hitting your friends and neighbors means you&#8217;re too late to get a flu shot, Erickson said. Influenza spreads rapidly in places such as schools, mess halls and churches.

Erickson said the vaccines are 90 percent effective. He said some people might have slight reactions and a small percentage of the population would be advised not to get them.

Kraft said the command doesn&#8217;t have a centralized way to track how many civilians and family members have already received the shots.

But he said there is enough vaccine this year for all those Americans living in Europe to receive vaccinations. Local clinics have set hours to give the shots and appointments might be possible as well.

The Army Surgeon General has set a goal of getting 90 percent of the force vaccinated by Jan. 24. But USAREUR has &#8220;taken a little more aggressive target,&#8221; he said.

The command is entering the shot information into MEDPROS for the first time on such a large scale, Kraft said. He said the database would eventually allow commanders to track medical readiness at the individual and unit level, demonstrating such things as immunization status and other relevant medical data. The Navy and Air Force have similar programs.

Kraft said the command is confident it will meet its target date.