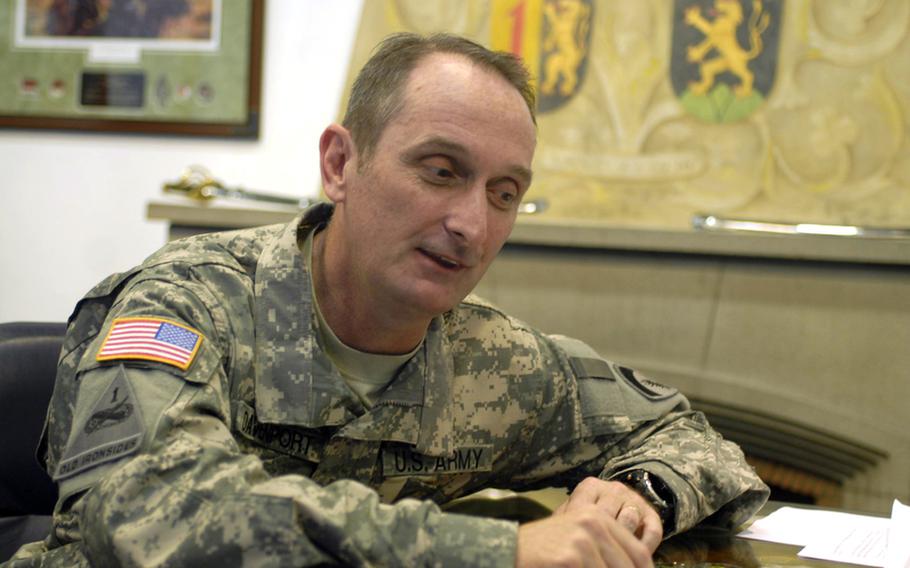 HEIDELBERG, Germany &mdash; U.S. Army Europe&rsquo;s top enlisted leader knows soldiers are worried about their future in the wake of plans to cut troop numbers, and he has some tips on how they can help safeguard their Army careers.

Command Sgt. Maj. David S. Davenport Sr., the senior enlisted soldier in Europe since February, promised in an interview Friday to be as open and transparent as possible in addressing soldiers&rsquo; concerns. He has a blog and Facebook page that he hopes will open up a dialogue with troops and their families.

&ldquo;I&rsquo;ve always tried to model my leadership style after being a communicator and letting those soldiers know what&rsquo;s going on, what I&rsquo;m thinking,&rdquo; Davenport said. &ldquo;I&rsquo;ve tried to keep that throughout my career.&rdquo;

Davenport hopes to reassure concerned soldiers about the pending troop cuts. He said sustaining fitness, being disciplined and seeking self-improvement, such as enrolling in military or college courses, are areas troops need to keep on top of.

The Army is slated to cut about 80,000 soldiers over the next five years.

&ldquo;We know that we&rsquo;re going to get smaller,&rdquo; he said. &ldquo;I think our Army is doing it in a way and manner where they&rsquo;re trying to be precise and have it make sense; not a rush to failure.&rdquo;

Troops need to understand that the cuts take place over five years, he said, and mixed messages are partly to blame for the confusion.

&ldquo;We sometimes do make the message too complicated, and I think we saw that earlier this year,&rdquo; Davenport said.

Davenport also touched on five things he thinks make a great leader, lessons picked up along the way since he became a sergeant in 1985: Master your weapon system, know and understand squad tactics, know the role of the noncommissioned officer, have fun and truly have soldiers in your heart.

&ldquo;We as leaders have to remember that we&rsquo;re there to serve, and you never get bigger than the soldier,&rdquo; Davenport said.

Today&rsquo;s soldiers face a different environment than troops did when Davenport enlisted 28 years ago, a fact that&rsquo;s not lost on him.

&ldquo;When I was at their grade and position, it wasn&rsquo;t as complex as it is today, especially as a noncommissioned officer,&rdquo; Davenport said. &ldquo;Nowadays, we&rsquo;re asking young soldiers to fight on an asymmetrical battlefield. &hellip; That takes a lot of brain power.&rdquo;

But, he added, &ldquo;Today&rsquo;s soldier is much better than my generation.&rdquo;

Davenport came to USAREUR from the 1st Armored Division at Fort Bliss, Texas, where he served as command sergeant major of both the division and the base. He hopes to honor today&rsquo;s crop of USAREUR troops in different ways, such as a recently started soldier of the week program.

Davenport said maintaining overall fitness and looking at training management are two areas that could stand improvement. He added that using resources effectively and not wasting soldiers&rsquo; time are key.

Davenport&rsquo;s Facebook page is www.facebook.com/USAREURCSM. His webiste, including a link to email Davenport questions, is www.eur.army.mil/leaders/csm/.