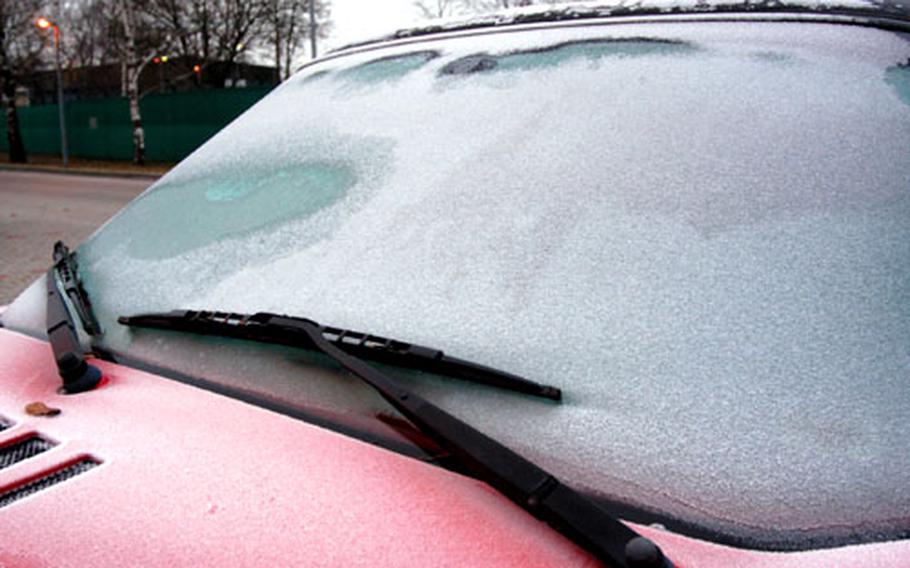 One way to navigate the roads safely during the winter is to have the windshields and windows clear of ice and snow. In Germany, it is the law. Also, snow must be cleared from the hood and roof of your car before driving. (Michael Abrams / S&S)

HEIDELBERG, Germany &#8212; Now is the time for drivers to start taking it easy.

The U.S. Army Europe and Installation Management Agency-Europe are teaming up to provide comprehensive driving tips with a Winter Safety Campaign, which runs through April.

With the Army&#8217;s &#8220;Be Safe&#8221; campaign as its muscle, military officials are urging drivers to ease up on the gas, use the brake and prepare for roadside hazards throughout the winter.

&#8220;The intent of this campaign is to save lives by implementing a combination of new and proven risk management techniques ...,&#8221; reads a note on the USAREUR home page.

Maureen Pikal, the acting IMA-E safety officer, based in Heidelberg, said drivers should use the following tips this winter:

Always let someone know where you&#8217;re going and which route you will be taking.

Get your vehicle winterized by adding antifreeze and winter-grade oil.

Plan long trips carefully by checking weather, listening to travel advisories and resting every two hours while on the road.

Carry food, water, blankets, and an emergency car kit with a windshield scraper and small broom for ice and snow removal.

Pikal said that the leading cause of off-duty deaths is transportation accidents.

There were 131 privately owned vehicle fatalities Army-wide in fiscal year 2003, with 130 of those deaths occurring during off-duty hours, according to officials at the U.S. Army Safety Center, headquartered at Fort Rucker, Ala.

Preparing a vehicle for winter and knowing how to react if stranded or lost on the road are the keys to safe winter driving, Pikal said.

&#8220;The biggest thing is to just slow down,&#8221; she said, reminding winter drivers to maintain six to eight seconds of driving time between vehicles while on the road.

Also, Pikal said ice forms in many areas along highways and bridges, causing vehicles to skid. She warns drivers not to slam on the brakes, but instead ease off the accelerator and steer into the direction of the skid.

Studies show that many accidents seem to happen directly after troops return from deployments, she said, which is why winter driving tips are now part of the reintegration process.

Pikal said two new driving classes may be coming to Europe soon to stress the fact that &#8220;driving is a life skill.&#8221; An aggressive-driving class will be classroom-based and given to people who have caused accidents. An advanced driving skills course, taught outdoors, will focus on improving driving skills.