Bruce Crandall, 78, a retired colonel and "Huey" pilot, was an honored guest at the UH-1's retirement ceremony from U.S. Army Europe service in Hohenfels, Germany, on Wednesday. Crandall was awarded the Medal of Honor for heroic rescue efforts in Vietnam. (Dan Blottenberger/Stars and Stripes)

Bruce Crandall, 78, a retired colonel and "Huey" pilot, was an honored guest at the UH-1's retirement ceremony from U.S. Army Europe service in Hohenfels, Germany, on Wednesday. Crandall was awarded the Medal of Honor for heroic rescue efforts in Vietnam. (Dan Blottenberger/Stars and Stripes) 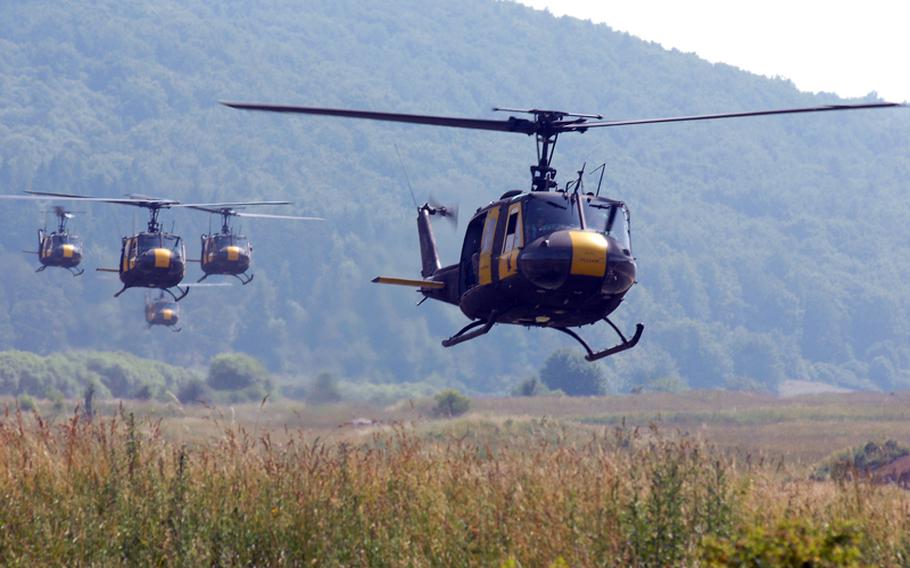 U.S. UH-1 helicopters prepare to drop German troops during air assault training at Hohenfels, Germany, in 2008. The "Huey" was retired from U.S. Army Europe service in a Wednesday ceremony at Hohenfels. (Seth Robson/Stars and Stripes) 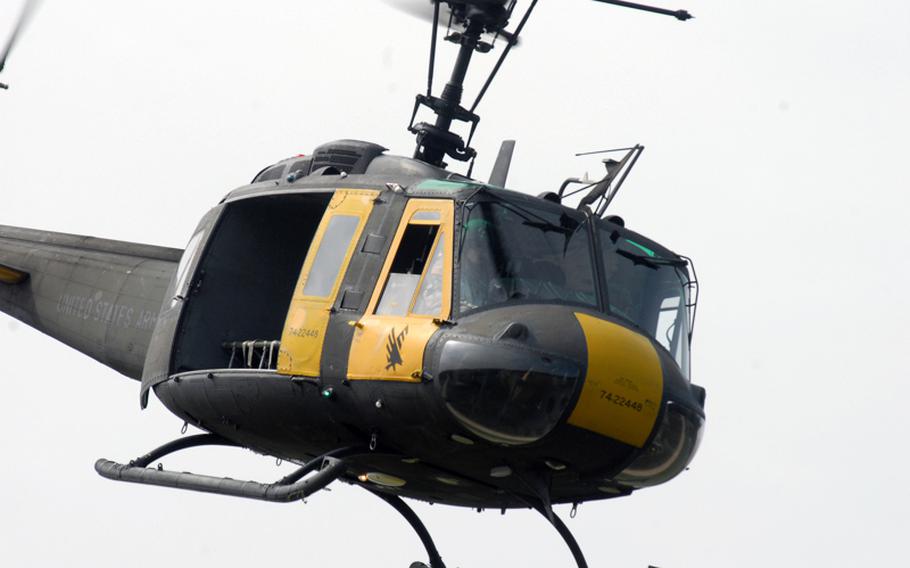 HOHENFELS, Germany -- The distinctive &ldquo;whomp, whomp&rdquo; of the UH-1 Army helicopter could be heard coming over the horizon.

As the aircraft came into view, a smile crept across the face of retired Col. Bruce Crandall. A Medal of Honor recipient, Crandall flew the &ldquo;Huey&rdquo; in Vietnam. He was an honored guest at the aircraft&rsquo;s retirement ceremony Wednesday in Hohenfels.

The ceremony marked the last time the aircraft would take flight in U.S. Army Europe. It will be retired from the Army by the end of fiscal 2012, according to officials. Crandall has been to several bases throughout the Army over the past few months bidding farewell to the historic aircraft.

&ldquo;That sound brings a smile to my face every time,&rdquo; he said. &ldquo;I am young again.&rdquo;

The sound could be heard echoing across the base as spectators from a nearby Volksfest stopped to view the ceremony. The overcast skies and threatening rain were not enough to keep the four aircraft grounded as they took off for their last flight to Ramstein, where they will be decommissioned.

The storied helos were most recently used to train troops preparing to deploy to Iraq and Afghanistan. Upon their retirement, the Hueys will be used as monuments or be sold, according to an Army news release.

The aircraft was developed in 1952 by Bell Helicopter and ordered into production in 1960 for the Vietnam War. It was used mainly by the U.S. Army as a medical evacuation and utility helicopter. The Huey has flown more combat flight hours than any aircraft in history, according to a Joint Multinational Readiness Center press release.

The Army currently operates 51 Hueys. A Marine Corps light attack helicopter squadron in Afghanistan is using the UH-1Y model, according to the public affairs office for International Security Assistance Force.

The Army is replacing the Huey with the UH-72A Lakota as its light utility helicopter. With a $4.5 million price tag, the twin-engine Lakota is quieter, smaller and more maneuverable than the Huey.

The U.S. Army is fielding 200 of the German-made, U.S.-assembled Lakotas worldwide to use for medical evacuations, training and VIP flights.

Crandall, 78, remembers the first time he flew the Huey decades ago. He flew more than 900 combat missions during two tours in Vietnam.

&ldquo;We did not know how it would hold up in combat,&rdquo; he said, but added that pilots quickly learned to love it.

The Huey&rsquo;s durability was soon tested. On Nov. 14, 1965, Crandall led the first major division operation of airmobile troops into Landing Zone X-Ray in Vietnam&rsquo;s Ia Drang Valley. He and fellow Medal of Honor recipient Maj. Ed Freeman were credited with evacuating some 70 wounded in unarmed helos. The historic battle became the basis of the film, &ldquo;We Were Soldiers.&rdquo;

&ldquo;The Huey could take a hell of a beating,&rdquo; he said. &ldquo;All you needed was some duct tape, and go right back to flying. ... The first time I flew, my reaction was like the first time I had sex &mdash; it was a lot of fun.&rdquo;

After the flyover, it took some time for the sound of the aircraft to dissipate as they disappeared over the horizon. Some children in the crowd waved farewell; other spectators clapped. A few veterans lowered their heads with a smile and left with their memories.