In a neighborhood of Baghdad, Iraq, troops of 1st Armored Division&#39;s 1st Battalion, 36th Infantry Regiment, break in a door during search for illicit weapons in Baghdad, Iraq, during Operation Iron Hammer. U.S. Army Europe troops returning from Operation Iraqi Freedom and Operation Enduring Freedom will have up to 90 days to decompress before resuming maintenance or training. (Franklin Fisher / S&S)

In a neighborhood of Baghdad, Iraq, troops of 1st Armored Division&#39;s 1st Battalion, 36th Infantry Regiment, break in a door during search for illicit weapons in Baghdad, Iraq, during Operation Iron Hammer. U.S. Army Europe troops returning from Operation Iraqi Freedom and Operation Enduring Freedom will have up to 90 days to decompress before resuming maintenance or training. (Franklin Fisher / S&S) 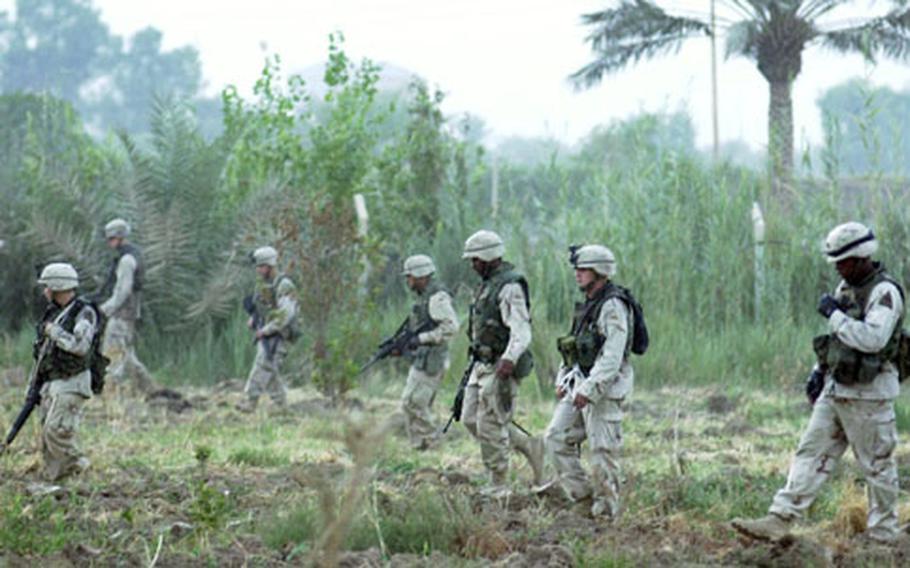 1st Armored Division soldiers search for clues during a raid south of Baghdad earlier this year. U.S. Army Europe troops returning from Operation Iraqi Freedom and Operation Enduring Freedom will have up to 90 days to decompress before resuming maintenance or training. (Terry Boyd / S&S)

HEIDELBERG, Germany &#8212; Soldiers returning from Iraq and Afghanistan to bases in Europe won&#8217;t turn wrenches for at least 45 days under a new U.S. Army Europe plan to reintegrate soldiers into family and garrison life.

During the first week back, each soldier who participated in Operation Iraqi Freedom or Operation Enduring Freedom will undergo a series of tasks geared toward medical care and financial support. The half-day schedule also allows the Army to monitor troops during their first days back with family and friends.

Then, any troop who served a year deployed will get a month&#8217;s leave. If a soldier served six months, he or she will get two weeks off, said Col. Eddie Stephens, a senior USAREUR personnel officer.

When troops get back from their time off, they enter the second 45-day phase of reintegration geared toward repairing their &#8220;personal kit,&#8221; Bell said.

During that time, soldiers may have their records updated and undergo further medical care or counseling. It&#8217;s also a time for them to straighten out their uniforms and gear.

Only after three months have passed will troops return to maintenance and training. Within 270 days, each returning unit will complete a field training exercise, according to USAREUR orders.

Bell seems prepared to back up his claim to give soldiers time to decompress.

Bell&#8217;s staff is working from an Armywide plan to rebuild a combat unit&#8217;s readiness within six months following an extended deployment, Stephens said.

The plan separates logistics, training and maintenance from the &#8220;human dimension,&#8221; Stephens said, a relatively new concept for the military.

In fact, a general will greet each planeload of returning troops, followed by a brief ceremony welcoming them home, Stephens said.

After Desert Storm, Bell took command of a 24th Infantry Division brigade returning from combat to Fort Stewart, Ga., he said. He remembers a sense of lost direction among dispirited soldiers enduring the stresses of returning home while trying to sort out battle-worn gear.

That experience has put Bell on a crusade to avoid the same mistakes.

With V Corps and 1st Armored Division soldiers set to return home in the coming months, care providers are gearing up to provide the necessary support.

While the Army knows about health threats such as malaria and leishmaniasis, there may be unknown hazards, Kraft said. Each troop will complete a health form, undergo medical screening and have blood drawn.

Army doctors then have tools to compare any health concerns that may manifest after the soldier&#8217;s return, Kraft said. Troops will also have a tuberculosis skin test.

Informing soldiers and families about symptoms of illness are keys to treatment, Kraft said. The Army publishes pamphlets to highlight certain health problems and offer toll-free numbers for information.

Community chaplains also are getting ready to counsel soldiers when they return, said Chaplain (Lt. Col.) Eric Erkkinen. Their focus is on relationships with their self, family, unit and God, Erkkinen said. Most problems arise from trouble communicating, he said. Young soldiers with families are at highest risk.

Should soldiers prefer not to have faith-oriented care, behavior health specialists are also on hand.

The Army, not unlike society in general, must work to &#8220;de-mystify and de-stigmatize&#8221; mental health care to be effective, said Lt. Col. Muriel Mosley, a social worker with 13 years&#8217; military experience.

Informing soldiers and families to identify those in need of treatment is essential, Mosley said. While she expects soldiers to have problems after serving a year in combat, she is optimistic that the community can help them heal, she said.

The soldiers aren&#8217;t the only ones receiving help. Army Community Service programs are preparing spouses in the form of reunion briefings, said Ricky Gibbons, who oversees community programs for the Army in Europe.