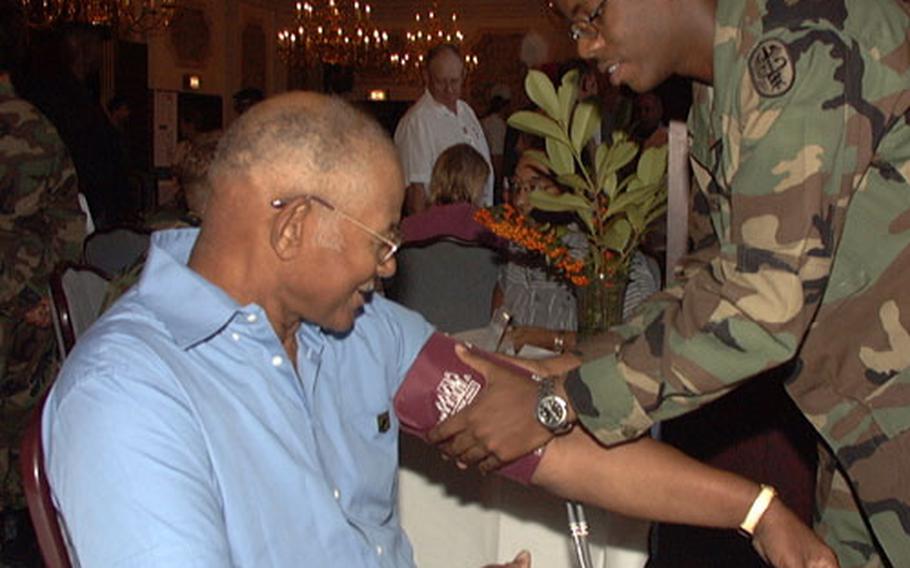 Retired troops and their spouses took advantage of medical screenings, records checks and briefings from the Army&#8217;s top leadership in Europe. Similar events took place Saturday on bases in Italy and the Netherlands.

&#8220;Events like this reassure retirees that someone is looking out for them, especially on medical issues,&#8221; said retired Col. Carl Baswell, 81, of Mannheim.

Troops from Heidelberg hospital offered everything from blood pressure checks to glaucoma screening in the Village Pavilion&#8217;s Williamsburg Room.

Officers from Veterans Affairs and the National Personnel Records Center were also on hand to assist with records and benefits.

Owen, who has been involved with the annual event several times over the past 13 years, has seen a decline in numbers as many retirees relocated stateside after base closures, he said.

Gen. B.B. Bell, USAREUR commander, welcomed retirees to the daylong event and explained how soldiers in his command supported recent Army missions in the Middle East. With word of military downsizing in Europe making recent headlines, Bell briefly addressed upcoming transformation &#8212; knowing that many retirees rely on bases for services. While a smaller force in Europe is being discussed, no decisions have been made, Bell said.

That candid talk from a senior leader is exactly why several retirees said they attend the annual event.

&#8220;I want to know what&#8217;s going on and keep abreast of activities in the command and any changes,&#8221; said one retired sergeant first class from Worms, who asked that his name not be used.

The annual event has been six months in the planning, said Capt. John Scalia, 27, a personnel officer who helped organize the day&#8217;s activities.

While many retirees in Europe reside near bases, and in turn keep themselves updated on changes, others &#8220;come out of the woodwork,&#8221; Scalia said.

One issue that surfaced in discussion among regional retiree councils is the military&#8217;s upcoming change to the Installation Access Control System.

Starting next month, some bases will require a scan of identification to get on post. Personnel were on hand to register the retirees&#8217; ID cards.