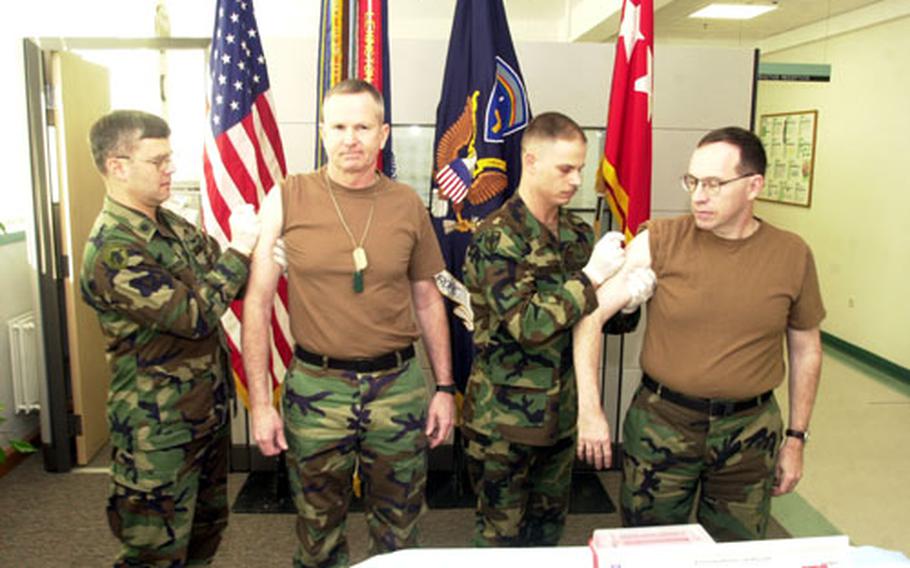 HEIDELBERG, Germany &#8212; U.S. Army Europe&#8217;s commander and its top enlisted soldier, Command Sgt. Maj. David L. Lady, rolled up the sleeves of their brown T-shirts Sunday and got the first of what officials promise will be thousands of smallpox vaccinations for troops in the region over the coming weeks.

Gen. B.B. Bell, the USAREUR commander, said it was important for him to lead from the front with the vaccinations.

&#8220;I wanted to demonstrate that the chain of command has confidence in this,&#8221; Bell said shortly after Dr. (Lt. Col.) Loren Erikson injected him with the live virus that virtually eliminated the smallpox disease 30 years ago.

While side effects from the shots can be severe, and in rare cases fatal, Bell said he wasn&#8217;t worried.

There hasn&#8217;t been a known case of smallpox since 1977 and inoculations generally were ended in 1983, according to the national Centers for Disease Control and Prevention.

Military leaders, however, are worried the disease could be used as a weapon if terrorists were able to produce their own strain of smallpox.

&#8220;Given the horrific risk of smallpox being used as a biological weapon, the prudent thing to do is protect our force,&#8221; Bell said.

Dr. (Col.) Allen Kraft, director of force health protection for the Army in Europe, said officials are still hammering out the details of how the Army will implement the Pentagon-wide program to inoculate troops.

Military health providers &#8212; especially those who would likely come in contact with anyone infected with smallpox &#8212; will be among the first vaccinated.

All units deploying to the Middle East will get the shot as well.