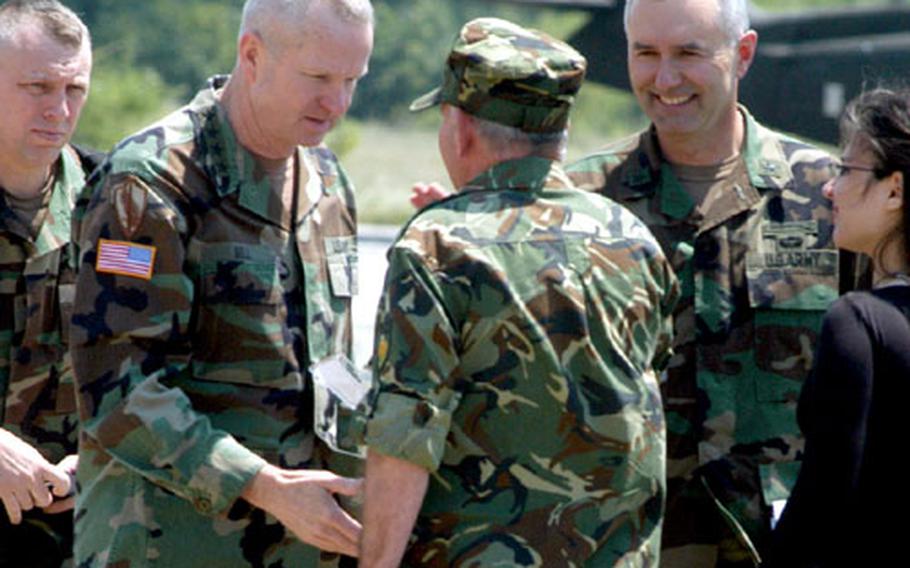 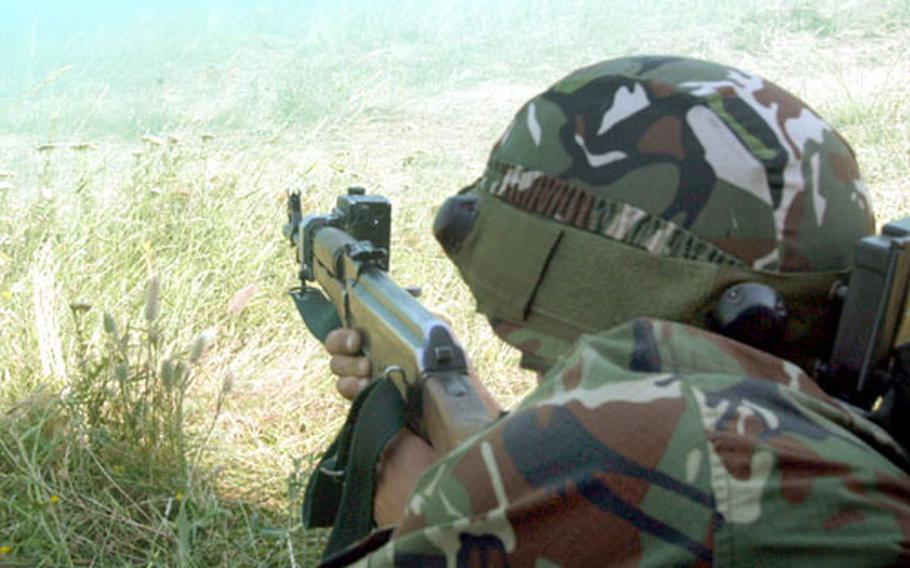 A Bulgarian soldier looks for insurgents through the smoke during a training exercise Friday in Bulgaria. (Russ Rizzo / S&S)

NOVO SELO TRAINING AREA, Bulgaria &#8212; U.S. Army Europe&#8217;s top leader reviewed part of a training exercise in Bulgaria on Friday, where U.S. troops are able to stretch their legs outside the relatively strict confines of training areas in Germany.

He said the exercise is an example of the type of training he hopes to see in the future, as USAREUR looks to expand such opportunities in eastern Europe.

In places such as Bulgaria, Bell said, the Army can practice deploying heavy equipment such as Bradleys, assess training with high-tech equipment and build relationships with allies.

Bell said technological improvements in the past few years allow training officials to watch exercises over wireless cameras and assess how soldiers did without a permanent infrastructure. Trainers now use a system called the Expeditionary Instrumentation System, which can be packed up and brought to remote locations.

Bell&#8217;s visit comes a day after Bulgarian and U.S. officials announced they were moving closer to closing a deal that would give the United States more frequent access to the Novo Selo Training Area and the nearby Bezmer Air Base. They expect to reach a deal by fall.

Bell declined to speculate whether bases in Bulgaria would become forward operating bases or remain simply places where the U.S. military conducts training.

Bell is expected to visit a larger exercise in Romania later this month called Romex &#8217;05 that involves U.S. and Romanian troops. Bulgaria, Romania and Poland are top among the list of countries U.S. officials have expressed an interest in as they transform the military and look east for bases that can be used as temporary sites during future deployments.

On Friday, about 100 soldiers, half of them American and half Bulgarian, conducted a cordon-and-search exercise using American Bradley fighting vehicles and Bulgarian BMPs, the equivalent of a Bradley. They used the vehicles to practice advancing on a mock terrorist cell and capturing its leader.

Bell, Gen. Nikola Kolev, chief of general staff for the Bulgarian army, and other dignitaries including the U.S. ambassador to Bulgaria and members of the Bulgarian parliament, watched from a nearby hillside.

As some dignitaries climbed on a Bradley and BMP on display after the exercise, Gen. Michael Tucker, the 1st Armored Division&#8217;s assistant commander for maneuver, demonstrated the Multiple Integrated Laser Engagement System &#8212; a sort of high-tech laser-tag system used in training without live-fire &#8212; to a Bulgarian officer.