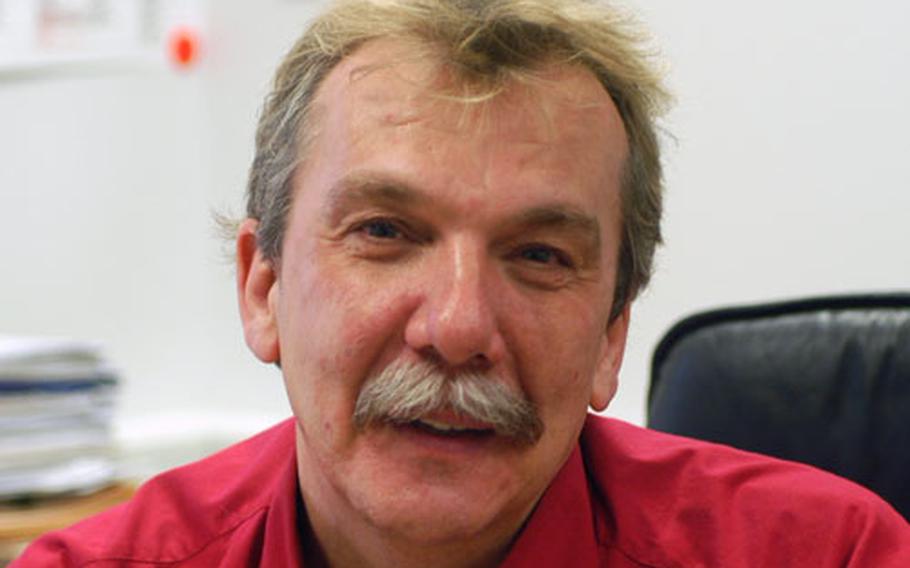 Heidelberg driving instructor Juergen Maier says the new, shorter U.S. Army Europe driving test is both clearer and easier than the former test, and that the remaining barrier to passing is not studying. (Nancy Montgomery / S&S)

HEIDELBERG, Germany &#8212; The driving test that determines whether U.S. military members and civilians are capable of safely navigating Germany&#8217;s roads &#8212; and which historically has had a high failure rate &#8212; has undergone a revision to make it clearer, shorter and easier.

And so far, the failure rate on the new U.S. Army Europe driving test has decreased.

With just a few months for comparison, the percentage of people passing the test on the first try has risen in most garrisons by several percentage points. But that means that more than one-quarter of those who take the prerequisite for a U.S. Army Europe driver&#8217;s license are still failing on the first try.

The new test contains 100 questions, including 25 road signs and has no time limit. The old test consisted of 50 road signs, which had to be identified within 20 minutes, followed by an untimed, 100-question test. In both tests, the maximum number of wrong answers is 15.

The Heidelberg Garrison began using the new test in October and saw its failure rate decrease from about 24 percent to 20 percent. But Heidelberg has typically had among the lowest failure rates.

Those BSBs, now called garrisons, started using the new test in September. Since then, their failure rates have gone down slightly in some cases and up slightly in some: Hanau: 38 percent; Wiesbaden: 35 percent; Mannheim: 45 percent; Darmstadt: 32 percent.

Although the failure rate has been a concern, costing time and money, the real goal in changing the test &#8212; which was accompanied by a new, better-sequenced manual and study materials &#8212; was to make the material easier to learn, said Tom Lorenzini, registrar at USAREUR&#8217;s provost marshal&#8217;s office.

The ultimate goal, he said, was for U.S. drivers to learn the rules of the German road more thoroughly and retain that knowledge longer.

So the new test benefits people who study, he said. Those who don&#8217;t, get the same old result: a failing grade, and a retest or two.

Maier said in his many years as driving instructor and tester, most people who fail the first time realize they have to study if they want to pass on the second go-around. The few who continue to fail start encountering longer mandated waiting periods before they can retest. After a third failure, which is rare, the waiting period is two months.

According to Lorenzini, there are currently some 246,000 USAREUR-licensed drivers &#8212; soldiers, other military members, Department of Defense civilians and family members &#8212; listed on the rolls. But because the license is good for five years, it&#8217;s unclear how many are actually here and using their licenses.