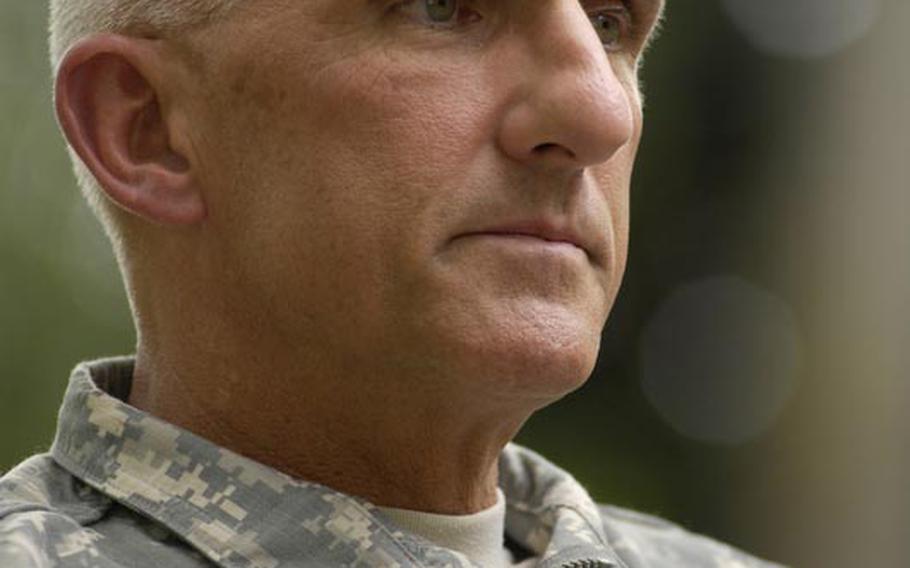 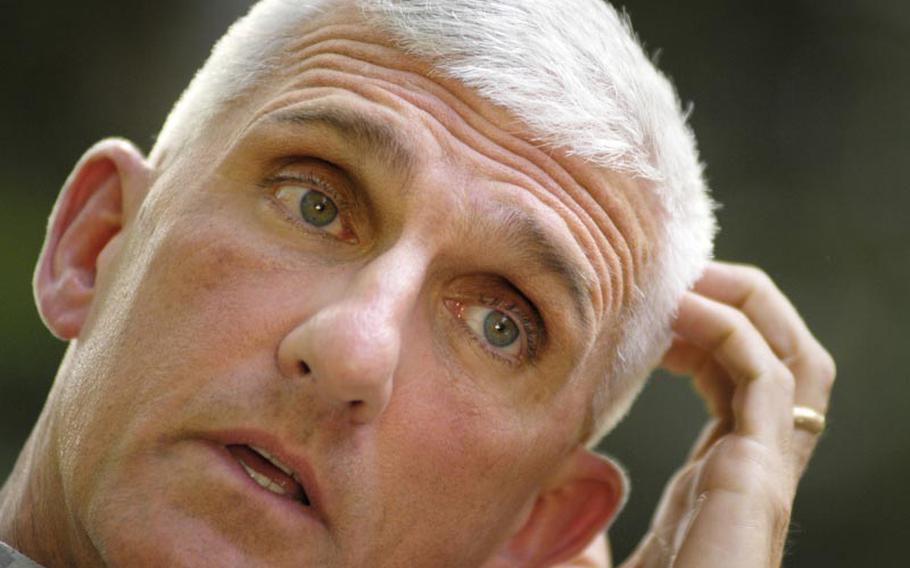 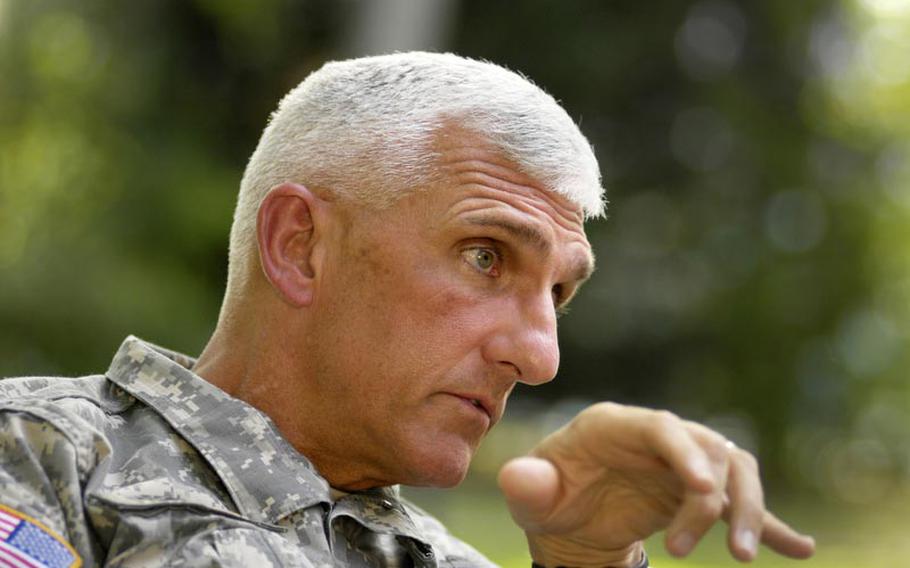 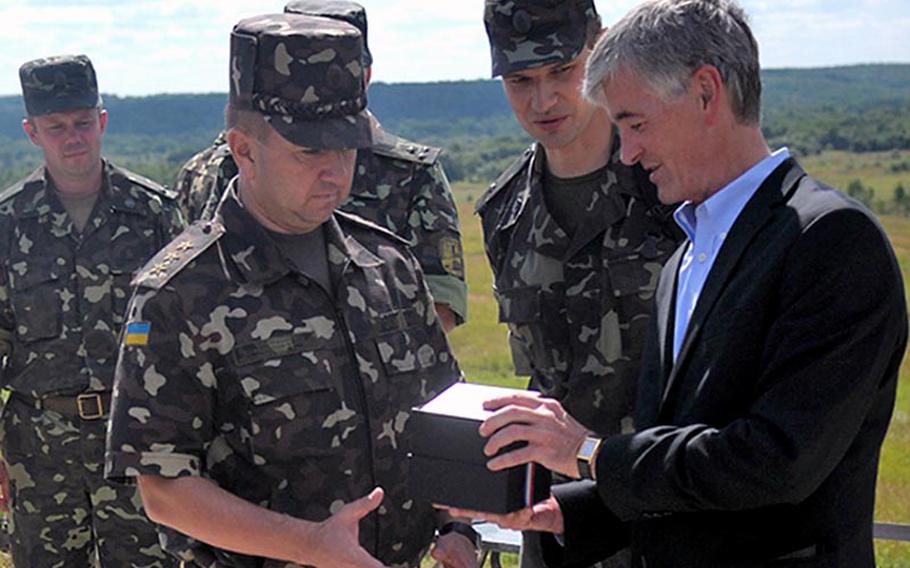 In an era of budget cuts and debt debates, with an expectation of at least $350 billion in cuts to the defense budget over the next decade, with critics charging NATO allies are not contributing their fair share, and with some in Congress clamoring to bring U.S. forces home from Europe, now that the Soviet threat is long extinct, Hertling has his work as an advocate for U.S. Army Europe cut out for him.

It was McHugh&rsquo;s first visit to the command as secretary, and Hertling took him to Grafenw&ouml;hr and Hohenfels, where the first thing McHugh saw was a Bulgarian unit in counter-IED training.

McHugh, the former ranking member of the House Armed Services Committee, had heard about security cooperation, of course, but seeing it was something else.

The Army secretary met with the Romanian army chief, who cut short his Italy vacation for the meeting and went to Ramstein Air Base, Germany, instead of Kosovo because of Kosovo-Serbia border tensions.

Then McHugh and Hertling hopped over to Ukraine to watch troops from 13 countries jump out of old Russian aircraft in the Rapid Trident exercise.

&ldquo;He saw how USAREUR was right in the middle of that, building partner capacity, and the value of its role in building allied nations&rsquo; militaries,&rdquo; Hertling said.

All in all, a good visit.

&ldquo;He told me he firmly believes in our mission over here,&rdquo; Hertling said. &ldquo;From a strategic viewpoint, he&rsquo;s a fan.&rdquo;

A spokeswoman for McHugh agreed with that assessment.

&ldquo;I believe he returned with a better understanding of the outstanding facilities and capabilities available at the JMTC (Joint Multinational Training Command) as well as a greater appreciation for our ability to build partnerships and strengthen relationships through combined training with our European Allies,&rdquo; Lt. Col. Anne Edgecomb said in an email. &ldquo;Clearly, a continued U.S. Army presence in Europe will facilitate engaging our NATO Allies, building relationships with our new partners, and training our coalition partners for deployment to contingency operations.&rdquo;

But the concern remains that in an era of budget constraints, retaining a constituency for USAREUR&rsquo;s mission might prove difficult. Rep. Barney Frank, D-Mass., for instance, a longtime critic of how much the U.S. spends on defense and an advocate of pulling more troops out of Europe said Monday on CBS&rsquo; &ldquo;The Early Show&rdquo; that curbing defense spending is &ldquo;going to be my mantra&rdquo; for the next few months.

So how does Hertling justify the command&rsquo;s mission? Let him count the ways:

&bull; 40,000 NATO troops in Afghanistan, many of them trained in exercises with USAREUR soldiers and in Grafenw&ouml;hr classes. &ldquo;They have, in fact, displaced 40,000 U.S. soldiers by playing with us,&rdquo; Hertling said. &ldquo;I personally can&rsquo;t put a price tag on that.&rdquo;

&bull; The American presence in Europe for the past 60 years has coincided with the longest period in European history without a conflict. &ldquo;Now you can&rsquo;t put a price tag on that,&rdquo; he said.

&bull; Building trust with allies before the next fight &ndash; &ldquo;It&rsquo;s priceless,&rdquo; Hertling said. &ldquo;The misunderstanding of other cultures is significant on the battlefield.&rdquo;

&bull; NATO isn&rsquo;t perfect, but it is &ldquo;the only active alliance we have,&rdquo; Hertling said. &ldquo;I think, without U.S. leadership, NATO would be in significant trouble. We can&rsquo;t have the secretary of defense tell NATO to pony up while we&rsquo;re withdrawing.&rdquo;

&bull; Because security threats in the region are routinely downplayed, Hertling said, most Americans don&rsquo;t realize that some nations, such as Poland and Georgia, have &ldquo;fear of their neighbors, and sometimes, it&rsquo;s justified.&rdquo;

&bull; The benefits USAREUR provides, as the lead executive service in Europe, to the Air Force and Navy, such as medical care and drivers&rsquo; licensing. &ldquo;We spend $1.2 million on servicing trucks that deliver the mail,&rdquo; he said.

&ldquo;If something happens in Lebanon or Libya, who gets the Americans out?&rdquo; he said. &ldquo;We do a lot of things people don&rsquo;t know about.&rdquo;

Hertling took command of USAREUR in March, just before a decision was announced that it would hold onto three of its four combat brigades &mdash; instead of two as had been ordered in a round of military rebasing, and four that had been recommended by the Pentagon.

&ldquo;For right now, I think it&rsquo;s pretty firm,&rdquo; Hertling said of the decision. But in another five years, he said, who knows? &ldquo;In an era of economic restraints, anything can happen.&rdquo;

Which brigade is set to return by 2015 has still not been announced. &ldquo;We&rsquo;ve made a recommendation to the Department of the Army, and they haven&rsquo;t approved it,&rdquo; he said.

He said it wasn&rsquo;t clear how imminent defense budget cuts would affect USAREUR.

&ldquo;It will mean we&rsquo;ll have to take a very hard look at how to do less things, better,&rdquo; he said. &ldquo;We have to take a collective look at contracts, the number of people we employ, the services we offer.&rdquo;

Because the wars in Iraq and Afghanistan are winding down and USAREUR will see far fewer of its soldiers deployed, Hertling said keeping three brigades &ndash; about 37,000 soldiers &ndash; was enough to accomplish the mission.

&ldquo;I&rsquo;m saying what we&rsquo;ll have here is actually perfect,&rdquo; he said.