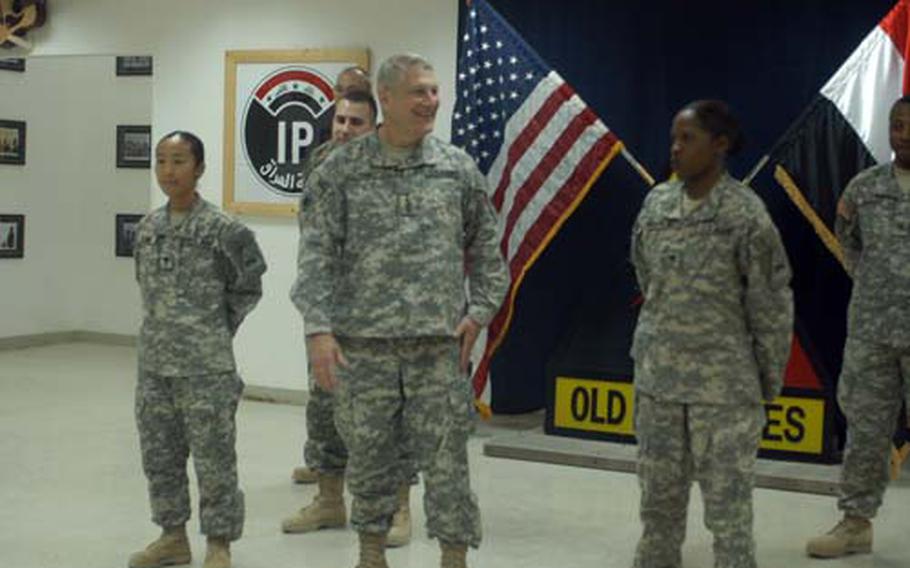 Gen. Carter Ham, new USAREUR commander, seemed the most enthused of soldiers making a re-enlistment commericial at Camp Speicher last weekend. They did it in four takes. (Nancy Montgomery / S&S)

Fueled mostly by Gatorade and the occasional bag of chips, Gen. Carter Ham last week made his first visit as U.S. Army Europe commander to his troops in Iraq.

The general, who once commanded all forces in northern Iraq, wanted to know how well troops &#8212; in the midst of their deployments in an ever-changing battleground &#8212; thought their training back in Germany had prepared them.

He had already been to Hohenfels; it was the first place he went after taking USAREUR command at the beginning of September.

"That was no accident," Ham said. "The most important thing we do is prepare our units to deploy."

He liked what he saw in Hohenfels but questions remained.

"If we know a brigade is going to Kirkuk, we can make Hohenfels into Kirkuk &#8212; but should we do that?" Ham said. "The downside is if you prepare them for a more peaceful area and then they get shifted (to a violent one). That&#8217;s not so good."

He also wanted to talk about how best to redeploy troops that are almost certain to deploy again in a year, with new senior leaders.

"First AD is going to turn around very, very quickly," Ham said. "I better have them ready to deploy in a year. That&#8217;s going to be a challenge to get the right senior leaders. We can&#8217;t wait for the normal summer move cycle."

As for the 2nd Stryker Cavalry Regiment from Vilseck, the challenge is a little different. That unit will be leaving about half its 300 Strykers in Kuwait, which means many Strykers will have to be obtained quickly for training.

Those were large concerns, but not the only reason for the visit. Ham also just wanted to see the troops.

"Here&#8217;s how it works," he said to a group of soldiers with the 2nd Brigade Combat Team, 1st AD, in the Forward Operating Base Hammer chow hall. "You ask whatever you want, and I decide if I want to answer it."

One lieutenant asked about more training time at their Baumholder base. Another asked when they would be getting Mine Resistant Ambush Protected vehicles. Ham answered, then asked about their quarters.

Finally, one soldier said, "Sir, they had us living out of closets."

But what&#8217;s owed and what can be provided isn&#8217;t always the same thing. Units set to return to Germany after long deployments &#8212; including the soon-to-redeploy 2nd SCR &#8212; will be over strength when it soon returns to Germany.

The bad news is quarters for single soldiers are expected to be more crowded, not less &#8212; possibly with three to a room in some cases.

Ham is a warm, avuncular figure, white-haired at 56, who clearly enjoys being around troops. He pats backs, drapes an arm around shoulders, gives attaboys, and makes jokes, often ry mess hall one morning &#8212; one of the few meals he was seen to eat &#8212; Ham cracked up a group of MPs.

When Capt. Solon Webb, commander at a Baqouba outpost, briefed him on the unit&#8217;s activities and said he had found young Iraqi officers to be more flexible and can-do than their senior officers, Ham smiled.

"Some would argue the U.S. Army is no different," he said.

Ham asked Webb about casualties. One soldier was killed by small-arms fire in Baghdad but none since, the captain said. "We&#8217;ve been lucky."

Ham mists up when he recalls a young brain-injured soldier he knew who partially recovered and turned up one day in his wheelchair for a Pentagon visit. He&#8217;s a proponent of keeping wounded soldiers in the Army if they can contribute, even if they can no longer haul a rucksack.

The suicide bombing in a Mosul mess tent within his command four years ago that killed 22 people and wounded 69, most of them soldiers, remains a signal event.

Ham went to Camp Speicher to see Maj. Gen. Mark Hertling, 1st AD commander and commander of northern Iraq forces; and the 18th Engineer Brigade. He went to FOB Key West to see the newly modularized 16th Sustainment Brigade, where he happily listened to logisitics briefs for what seemed like hours.

He spent much of his final day in the back of a Stryker, traveling among several eerie combat outposts in old Iraqi buildings in Diyala province &#8212; sparsely furnished but with elliptical machines &#8212; to see soldiers with the 2nd Stryker Combat Regiment.

He climbed into MRAPs, checked out barracks, toured offices, handed out U.S. Army Europe coins, made a re-enlistment commercial, posed for photos, attended briefings and office calls and asked a lot of questions, even when he knew the answers.

One officer at FOB Warhorse told him that training for roadside bombs &#8212; and, most recently, booby-trapped houses &#8212; should be more realistic.

Ham knew about the lackluster simulations. Although when his convoy was hit during his Iraq command, another officer said, Ham had simply dusted himself off, checked his watch and continued on to his meeting in Mosul.

After his tour, though, Ham said, he needed time and space to regroup, and he&#8217;s adamant that soldiers get the same.

Ham agreed there needed to be more dramatic IED simulations, possibly in Romania, where training is less constrained, and that mission rehearsals should reflect the trends of female suicide bombers and booby-trapped houses. He was leaning toward making the mission rehearsals more area-specific.

He&#8217;d also decided more sophisticated role-playing and cultural training was needed for officers to engage with Iraqi leaders, sheiks, tribal elders and others.

All in all, Ham said, he was reassured by what he heard on the trip.

"I was very pleased. The commanders felt they were very well prepared," he said on the flight back to Heidelberg. "I also gained some insights &#8212; no major change of direction, but areas of emphasis."

Back at the FOB Hammer chow hall, Ham had given a sort of benediction to the young soldiers with many months to go in their 15-month deployment.

"Your families &#8212; know that they love you, and you love them," he said. "Keep that dialogue alive. The days in Iraq are endless, but the weeks and the months go by pretty quickly."