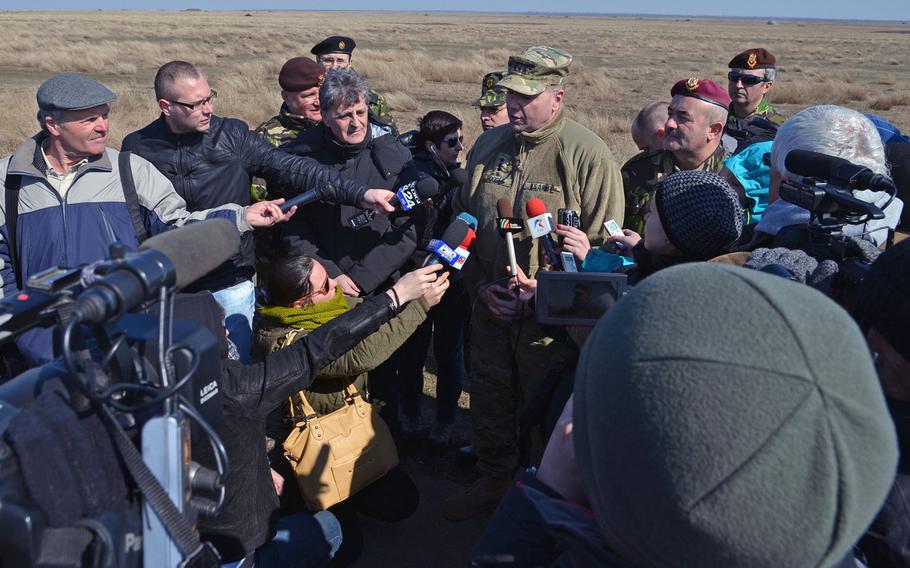 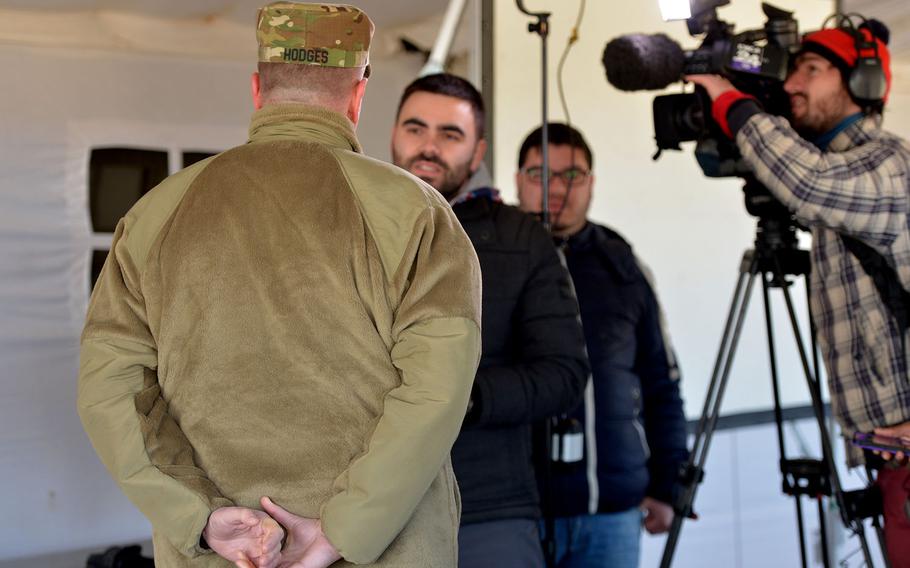 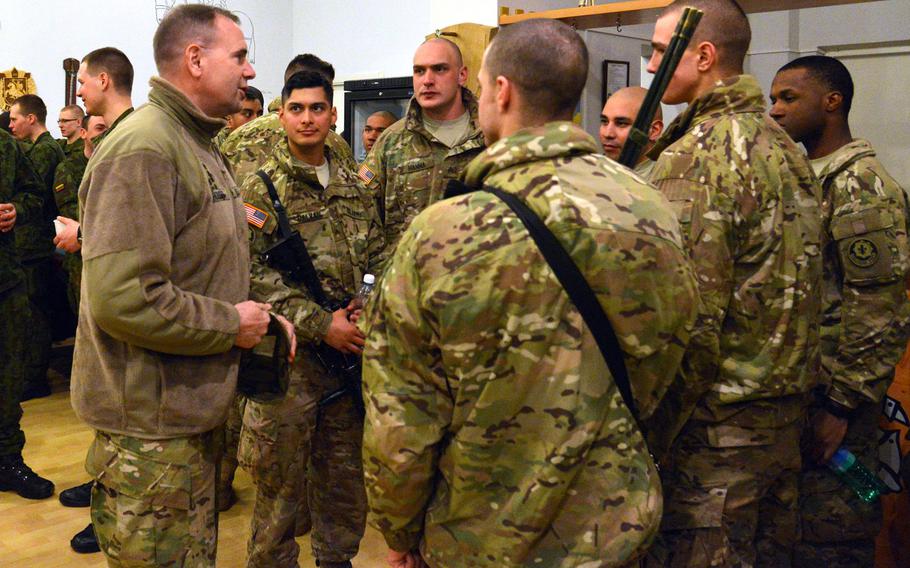 Buy Photo
Lt. Gen. Ben Hodges, left, talks to soldiers of Troop L, 3rd Squadron, 2nd Cavalry Regiment in Alytus, Lithuania, on Sunday, March 22, 2015. The soldiers had been training in Lithuania and were then taking part in the regiment's Dragoon Ride from Lithuania and Estonia to their home base in Vilseck, Germany. (Michael Abrams/Stars and Stripes) Buy Photo
Lt. Gen. Ben Hodges, U.S. Army Europe commander, is interviewed by Lithuanian media in Panevezys, Lithuania, on Monday, March 23, 2015. Hodges rode into town on a Stryker that was part of 3rd Squadron, 2nd Cavalry Regiment's Dragoon Ride from Lithuania and Estonia to their home base in Vilseck, Germany. (Michael Abrams/Stars and Stripes) 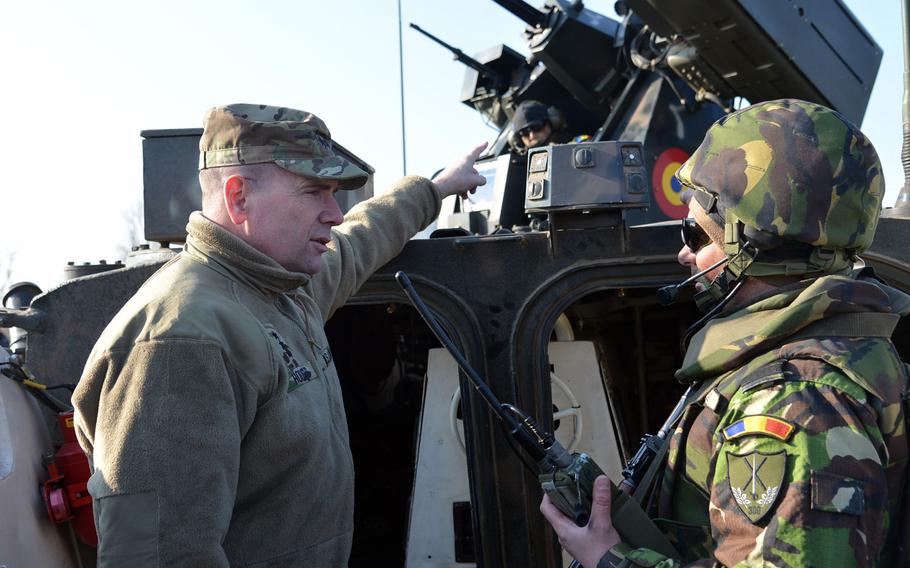 Buy Photo
Lt. Gen. Ben Hodges, left, talks to a Romanian soldier about his armored vehicle at the Smarden Training Area in Romania, in March 2015. The U.S. is considering a plan to expand its military training of Ukrainian forces to include army soldiers, the commander of the U.S. Army in Europe said Monday, July 13, 2015. (Michael Abrams/Stars and Stripes) 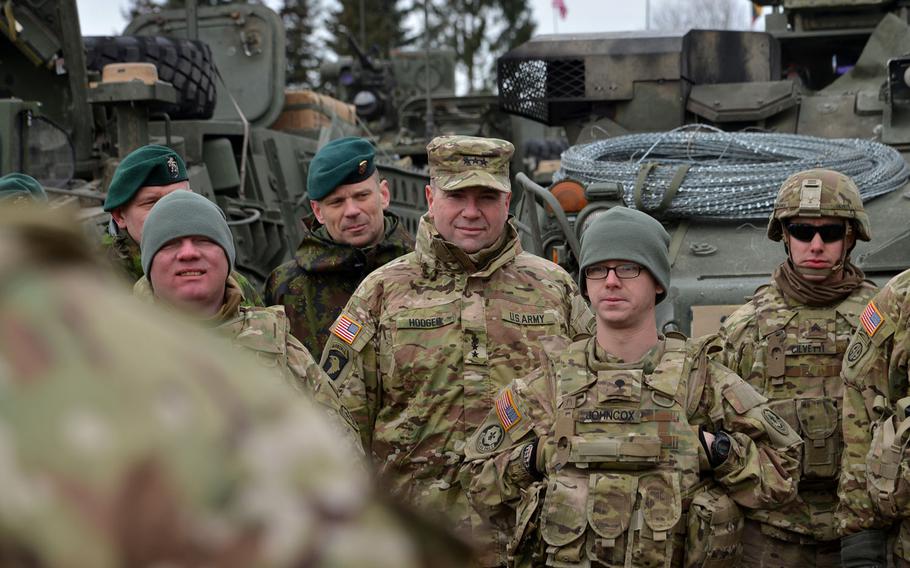 SMARDAN TRAINING AREA, Romania — The one-on-one interview request was an unexpected curveball in a carefully choreographed itinerary, but Lt. Gen. Ben Hodges quickly dismissed any suggestion by a staffer that he politely decline.

“Let’s do it,” said Hodges, marching off to meet a Romanian television journalist.

As the camera crew struggled to get the sound right on the windy Romanian training ground, asking Hodges repeatedly to speak into the microphone for sound tests, Hodges complied without complaint. “This is very important. I am willing to do anything,” he said.

Such occurrences are routine for Hodges. In almost five months at the helm of U.S. Army Europe, he has seen his profile soar as he leads some 30,000 soldiers during an era of new security challenges.

Unlike many military commanders, who shun interview requests and news conferences, Hodges has done scores of them in his travels across Europe to meet with allies and his troops.

Whether it’s a formal news conference in Kiev or Berlin or a spontaneous interview in the Romanian countryside, Hodges rarely says no and isn’t afraid to go off the cuff regarding Russia’s annexation of Ukraine’s Crimea peninsula. At times, he’s pushed the envelope, raising eyebrows in certain corners of NATO, where some ambassadors have taken issue with his assessment of Russian troop levels in Ukraine.

Hodges acknowledges he’s made a few missteps along the way and ruffled some feathers in Brussels. He says he’s tweaked his message in response to some of that criticism — avoiding, for example, detailed assessments of the number of Russian troops in Ukraine. That figure is always in flux and subject to dispute. Otherwise, Hodges said, he has no choice but to take an aggressive communication posture, even if that means going out on the occasional limb.

“The Russian false narrative is just constant, so we have got to counter that with the truth,” Hodges told Stars and Stripes during his recent travels through Lithuania and Romania. Since Russia’s annexation of Crimea in March 2014, military commanders in Europe have drawn attention to Moscow’s sophisticated use of disinformation to deny its actions in Ukraine and to blame NATO for ratcheting up tensions.

Gen. Philip Breedlove, NATO’s supreme allied commander for Europe and Hodge’s boss, says the alliance must do more to fight Moscow’s message, which has gained considerable sympathy among some European leaders.

For Hodges, the response to Moscow’s narrative has been to issue steady criticism of Russia’s “illegal annexation of Crimea” and to spotlight USARUER’s efforts to deter aggression and reassure NATO’s eastern allies.

He’s also called out Germany for failing to sufficiently invest in defense and warned that Russia’ use of hybrid warfare in Ukraine — a strategy that relies on proxies and other ambiguous war fighting tactics — could someday directly challenge allies.

If Russia were to use proxies to stir unrest in a NATO state, as the alliance has accused Moscow of doing in Ukraine, it would test the 28-nation alliance’s commitment to unite under Article 5 — the NATO mandate that an attack on one is an attack on all.

“Once Article 5 is gone, our alliance is over,” Hodges warned during a speech to political and military leaders in Berlin on March 4.

Some countries’ ambassadors to NATO, however, weren’t pleased about this remark on Article 5 commitments, Hodges acknowledged.

“He’s (Breedlove) had to sweep up some broken glass of mine a couple times, I think,” said Hodges, who says he has received some communication “mentoring” from the NATO commander. “Those are mistakes you have to go through.”

Breedlove, meanwhile, said Hodges continues to be part of an overall effort to dispel false narratives.

“Countering misinformation is a team effort, and Gen. Hodges and his leaders are an important part of that effort,” Breedlove said in a statement to Stars and Stripes, declining to specify private command advice.

To some extent, however, Hodges communication efforts mirror many of Breedlove’s. If Hodges stands out at the service component level for his forthrightness, Breedlove is unique among combatant commanders. Since assuming command at NATO and U.S. European Command, Breedlove has outpaced all of his counterparts with the number of interviews and appearances he has made at international conferences. Such forums have become routine business rather than rare exceptions.

“Russia has crafted a blizzard of stories to try to muddle and obscure the truth in its actions and support for separatists in Ukraine,” Breedlove said in his statement to Stars and Stripes. “So it’s important that we counter fiction with facts, and I count on our whole team to help counter disinformation when and where we see it,”

For example, when Russia first intervened in Ukraine, its state-controlled media reported that so-called little green men in the country — soldiers in uniform without insignia — had no connection to the Russian military. But soon after Russia’s formal annexation of Crimea, Russian President Vladimir Putin acknowledged that his troops were on the peninsula. In a recent documentary, Putin went even further, saying that the Kremlin was planning the annexation in late February, at the time when then-President Viktor Yanukovych was fleeing Kiev.

The Russian president, who enjoys approval ratings of more than 80 percent at home, has also denied any direct Russian role in the subsequent conflict in eastern Ukraine, despite much evidence to the contrary.

Countering the Kremlin’s message isn’t easy. Its version of events reaches far beyond Russia thanks to the government’s slick RT news channel, which broadcasts in the United States and throughout Europe, and pro-government newspapers that reach the Russian diaspora.

“We all recognize the modern world and information era, you can either engage in it or not, but it is all going to get filled,” said Hodges. “That’s why I’ve taken an aggressive stance on this.”

During a recent tour through Lithuania and Romania, Hodges was again on message as he met with U.S troops working with allies in the region.

“There are 30,000 soldiers in Europe and, I am trying to get the effect of 300,000,” said Hodges, whose troops have various commitments in 39 of the 51 nations in his area of responsibility.

To do that, Hodges has spread his forces out across much of eastern Europe. The 2nd Cavalry Regiment, one of two remaining Europe-based brigades, has been spending much of its time in the Baltics, Poland and Romania. The unit is now coming to the end of an 11-day road march back to its home station in Germany, crossing 1,100 miles of land in a high-profile display to reassure partners.

The 173rd Airborne Brigade out of Italy, meanwhile, is poised to start a training mission in Ukraine and has other forces spread out in the region.

With so many soldiers in so many regions, Hodges spends most of his time on the road, away from his headquarters in Wiesbaden about 80 percent of the time.

“I feel an obligation to see our soldiers, who we’re asking to do so much stuff,” Hodges told Stars and Stripes as he was leaving Romania after a recent troop visit.

On that trip, a gaggle of reporters awaited. Rather that duck, Hodges stepped up to the microphone to make a statement and then he opened it up.

“I look forward to your questions,” he said.