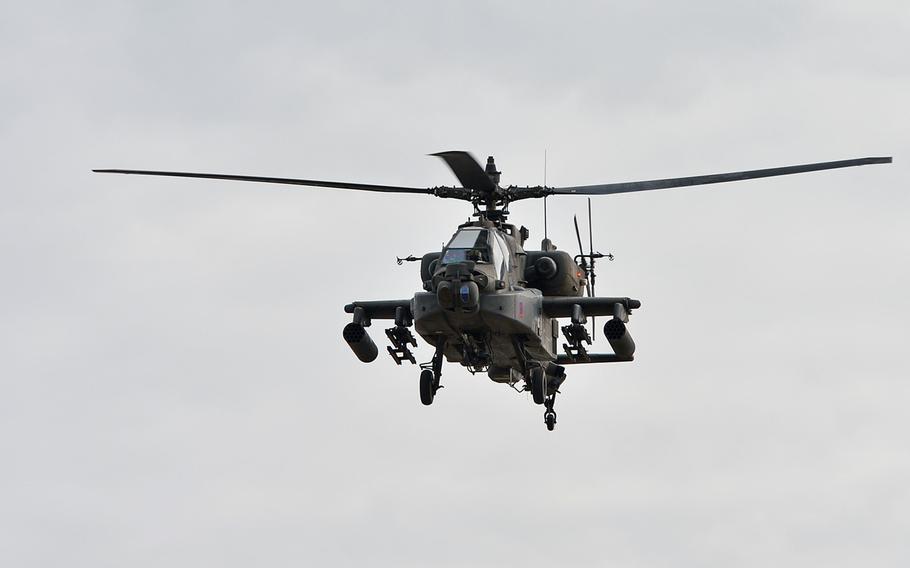 Buy Photo
An AH-64 Apache helicopter escorts Strykers of the 2nd Cavalry Regiment as they convoy from Alytus, Lithuania, to the Polish border, Monday, March 23, 2015. U.S. Army Europe is seeking additional aviation assets to improve its overall state of readiness in 2016 as allies adapt to a new security environment in Europe. (Michael Abrams/Stars and Stripes)

Buy Photo
An AH-64 Apache helicopter escorts Strykers of the 2nd Cavalry Regiment as they convoy from Alytus, Lithuania, to the Polish border, Monday, March 23, 2015. U.S. Army Europe is seeking additional aviation assets to improve its overall state of readiness in 2016 as allies adapt to a new security environment in Europe. (Michael Abrams/Stars and Stripes) 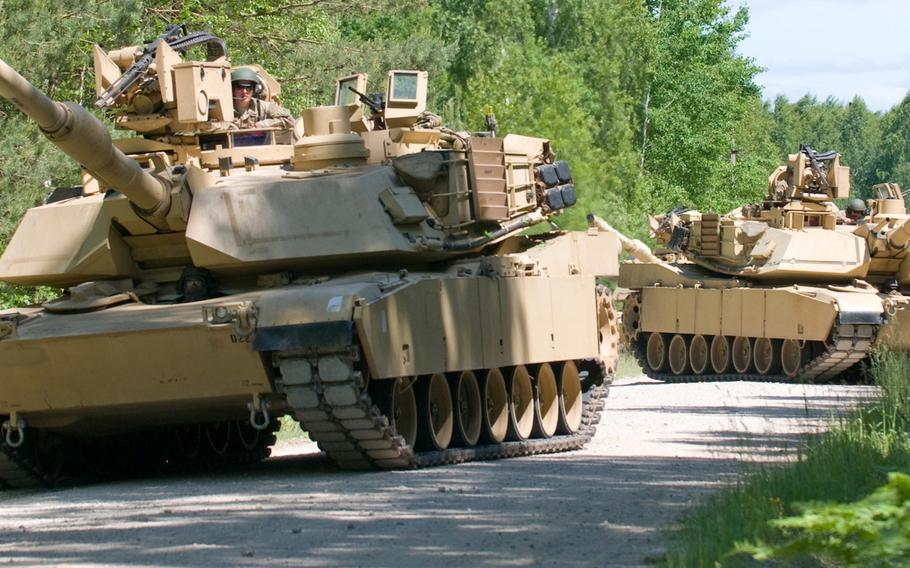 A convoy of M1A1 Abrams Main Battle Tanks with Team Eagle, Task Force 2-7 Infantry in Rukla, Lithuania, stops to search for mock enemy troops during exercise Saber Strike, near Rukla June 9, 2015. The Pentagon's 2017 budget will seek funds to send a brigade's worth of heavy equipment to Europe. That request would add on to the brigade size set of armor vehicles already deployed to Europe in 2015. (Jarred Woods/U.S. Army) 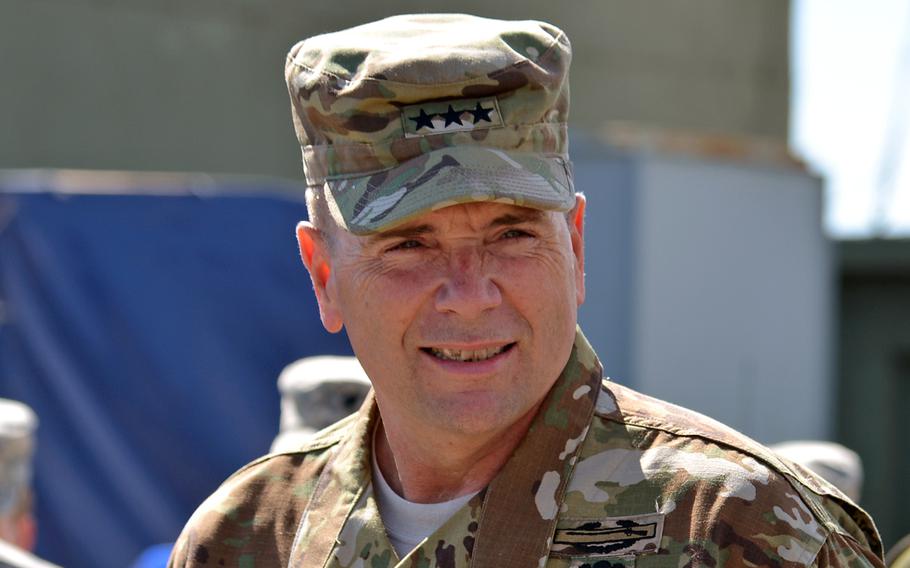 STUTTGART, Germany — A Pentagon plan to deliver an additional brigade’s worth of tanks and rotational troops to Europe will provide crucial firepower along NATO’s eastern flank, but a gaping hole remains for the general leading the Army’s efforts on the Continent.

“Army aviation is the most significant capability we need, so I am counting on the department and the Army to figure out how to get us the aviation capability we need on a rotational basis,” Lt. Gen. Ben Hodges, commander of U.S. Army Europe, said in an interview Wednesday. “Aviation is such a force multiplier.”

The Defense Department is seeking $3.4 billion for its European Reassurance Initiative in Fiscal 2017 — quadruple the amount of the previous year and a cash windfall that will further boost military operations across the Baltics and throughout eastern Europe.

The U.S. has markedly increased its presence in eastern Europe in the two years since Russia annexed Ukraine’s Crimea Peninsula.

Full details of the plan are to be unveiled next week, when the budget is formally presented. But Pentagon officials have said part of the funds will support an additional brigade’s worth of rotational troops along with the forward positioning of a brigade-size fleet of heavy vehicles and weaponry.

For the Army, that will ensure the continuous year-round presence of a heavy armor brigade in Europe, Hodges said. “Deterrence is all about having capability and demonstrating that capability. And this is a huge boost to our ability to do that,” he said.

But budget cutbacks in recent years have reduced Army aviation assets in Europe, such as attack and transport helicopters.

More aircraft, maintenance support and mission command elements are needed and have been formally requested, Hodges said. “I feel confident the Joint Staff is going to validate that request.”

For Hodges — who on Wednesday concluded a three-day visit to Ukraine, where he met with local forces — the past year in command has been one of transformation for USAREUR.

Since Russia’s 2014 intervention in Ukraine, the Army has increased the flow of forces into Europe, rotating them in from the States, and moved hundreds of heavy-armor fighting vehicles to strategic hubs in the Baltics and eastern Europe. Having an additional brigade’s worth of armor and artillery, the Army will be better positioned if called upon in a crisis, Hodges said.

“This is about speed,” he said. “If you can quickly assemble troops and equipment in the right place, you can prevent a crisis from escalating.”

For NATO, the three small Baltic states are a region of strategic concern. Formerly part of the Soviet Union, they all border Russia proper or its enclave on the Baltic Sea, Kaliningrad, with large numbers of Russian forces stationed across their borders.

A recent report by the Rand Corp. highlights those issues, arguing that NATO cannot successfully defend the territory of its “most exposed members.” A series of tabletop war games conducted by Rand between summer of 2014 and spring of 2015 showed the alliance is undermanned to immediately counter a Russian assault.

“Fortunately, it will not require Herculean effort to avoid such a failure,” the Rand report said.

War games indicated a force of about seven brigades, including three heavy armored brigades supported by airpower, land-based fires, and various enabling forces on the ground, could hold the line and prevent “the rapid overrun of the Baltic states,” the report concluded.

Given such concerns, officials in the Baltic states welcomed the Pentagon’s plans to increase presence in the region.

“U.S. presence in Europe is crucial for (the) security of our continent and I can only commend this decision of the U.S. government, reaffirming strong and enduring U.S. commitment to European security,” Juozas Olekas, Lithuania’s defense minister, said in a statement.

However, Olekas said he hopes for more commitments from other allies.

“We are ready to host greater allied formations, would it be men and women, Army pre-positioning stocks or both,” he said. The “Alliance also could count on our share of the burden in terms of host nation support, existing infrastructure and welfare packages for the troops.”

“Allied presence in Estonia is a key factor in ensuring the security of our region; we have worked hard for several years to achieve more Allied presence here, and we have a strong public and political support to hosting our allies in Estonia,” Hanso said in a statement.

Estonia will invest more than $40 million over the next five years on military base infrastructure to support a larger presence, Hanso said.

It remains unclear whether other NATO members will add military assets to the Baltics and other countries on Russia’s periphery, such as Poland. At a summit in Warsaw in July, NATO leaders are expected to examine plans for boosting the alliance’s posture.

On the U.S. side, the increased investment in reassurance measures “is very encouraging because it is a manifestation of the support by the administration and Congress and a recognition that our strategic interests are tied to the security and stability of Europe,” Hodges said.

But he cautioned that the U.S. cannot guarantee that security alone.

“Another message that should be clear to our allies is the expectation they live up to their obligations,” he said.