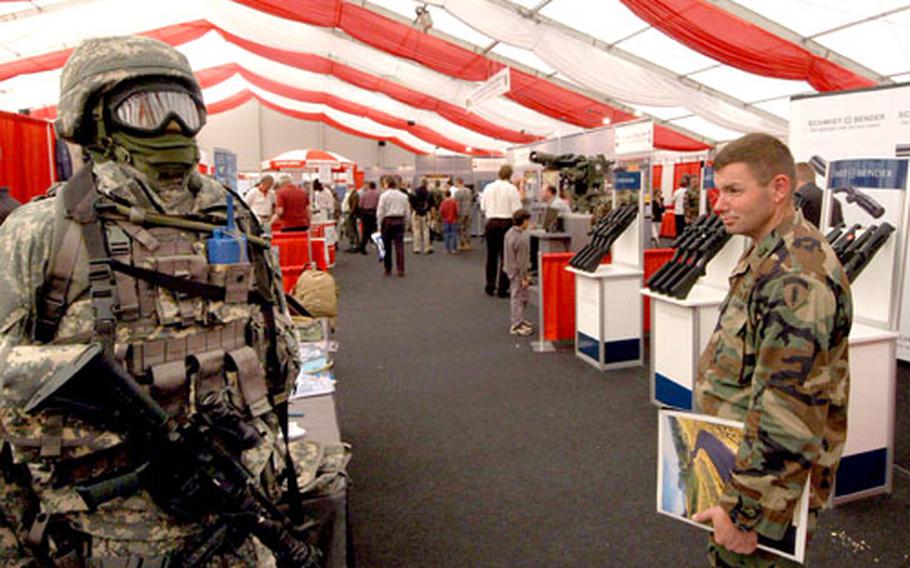 Inside the big tent at the Land Combat Expo 2005 in Heidelberg, Germany. The Land Combat Expo, a popular event with soldiers, has been canceled this year because of deployments and transformation of the troops in Europe, according to U.S. Army Europe officials. (Michael Abrams / S&S)

The event, which includes seminars, equipment and new technology exhibits, was scheduled to be held in September. Last year&#8217;s crowd was estimated at 10,000 attendees over the three-day event.

No decision has been made regarding a future date for the expo, which began in 2002, according to a USAREUR release.

&#8220;Because of deployments, transformation activities, and other missions, USAREUR&#8217;s operations tempo is too high to devote personnel and resources to the planning and setup for the expo,&#8221; the release states, adding that much of the targeted audience for the event will be busy with training when the expo was to roll around this fall.

As transformation efforts speed up this year, and with the deployment of parts of the 1st Armored Division and 1st Infantry Division this year already under way or expected to begin soon, the decision was made in mid-March to cancel the event, USAREUR spokesman Bruce Anderson said Monday.

The expo has been a valuable training tool in the past, but soldiers will be focused on more pressing tasks this fall, USAREUR spokesman (Col.) Roger King said in the USAREUR release.

&#8220;Those soldiers are expected to be too engaged (in warfighting and transformation) &#8230; to be able to come to Heidelberg and attend the expo,&#8221; King said in the release.

In previous years, soldiers have attended seminars on everything from the combat environments in Afghanistan and Iraq to the secrets of a successful marriage. Soldiers also got to check out the newest weapons and other military accoutrements.