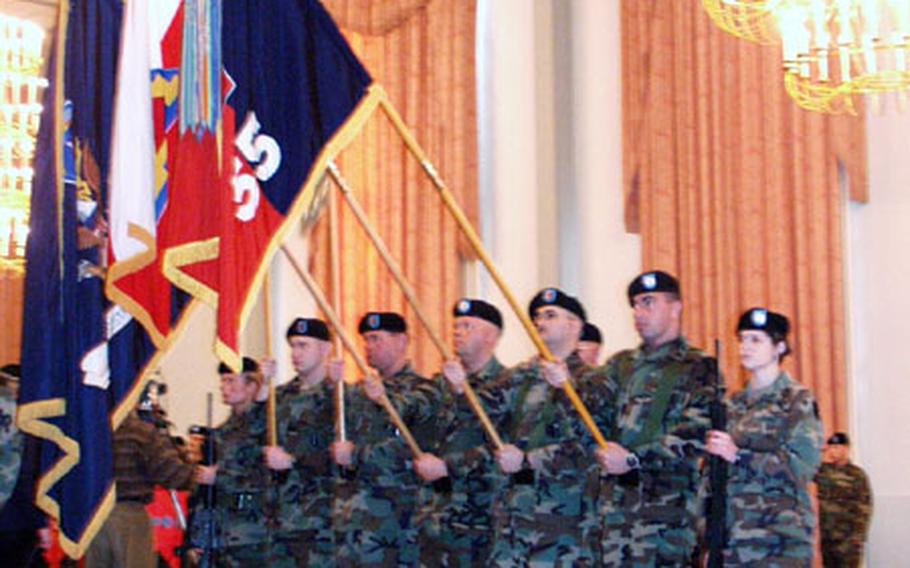 HEIDELBERG, Germany &#8212; Pennsylvania National Guard members who kept watch over bases in Europe for the past six months are heading home.

U.S. Army Europe said goodbye to the troops from the Keystone State during a ceremony Friday at Patrick Henry Village.

Made up of three battalions from the 28th Infantry Division, Task Force Keystone took over some force protection duties at U.S. bases in Germany, Italy, the Netherlands and Belgium.

The troops begin to rotate stateside at the end of the month, said Lt. Col. Loris Lepri, 42, of Glenburn, Pa. All of the Pennsylvania troops should be with their families by March 1, said Lepri, the task force&#8217;s executive officer.

During the ceremony, troops stood with their hands clasped behind their backs as an officer read details of the division lineage &#8211; one that dates to the Revolutionary War.

During World War II &#8212; the last time the division deployed to Europe &#8212; the officer read, Pennsylvania soldiers took part in some of the bloodiest battles in France and Germany.

This time, they checked a lot of identification cards and patrolled housing areas.

While deployed, 115 soldiers attended professional-development courses. Others took passes and traveled around Europe. Some said they finished books or played video games during off duty hours.

With slight changes in procedure, USAREUR trimmed the amount of troops to 12 percent, Dodson said.

To relieve the pressure on USAREUR, the Army activated Task Force Sante Fe, made of National Guard troops from states in the Midwest. Pennsylvania troops took over the mission this summer.

Initially, the Army said four rotations of National Guard troops would help out for six months each. One year into that commitment, it is unclear whether more guardsmen will arrive in the future.

As the soldiers head home, USAREUR is working on plans to maintain force protection levels, USAREUR spokeswoman Ali Bettencourt said. The guardsmen will be replaced by a combination of USAREUR soldiers, hired civilian guards and host-nation troops, she said.

&#8220;We&#8217;re capable with what we have to continue our force-protection mission,&#8221; Bettencourt said. &#8220;At this point, there has been no decision by the Department of Defense as to whether or not we will receive additional National Guard augmentation.&#8221;

Keystone mobilized 1,956 troops for duty in Europe &#8212; the largest overseas deployment for the Pennsylvania National Guard since the Korean War, according to Capt. Matthew Cooper, personnel officer for one of the three Task Force Keystone battalions.

Cooper said the extended time together helped his unit&#8217;s cohesiveness. Although the call-up meant leaving civilian homes and jobs, most of the Pennsylvanians enjoyed the chance to spend six months in Europe.