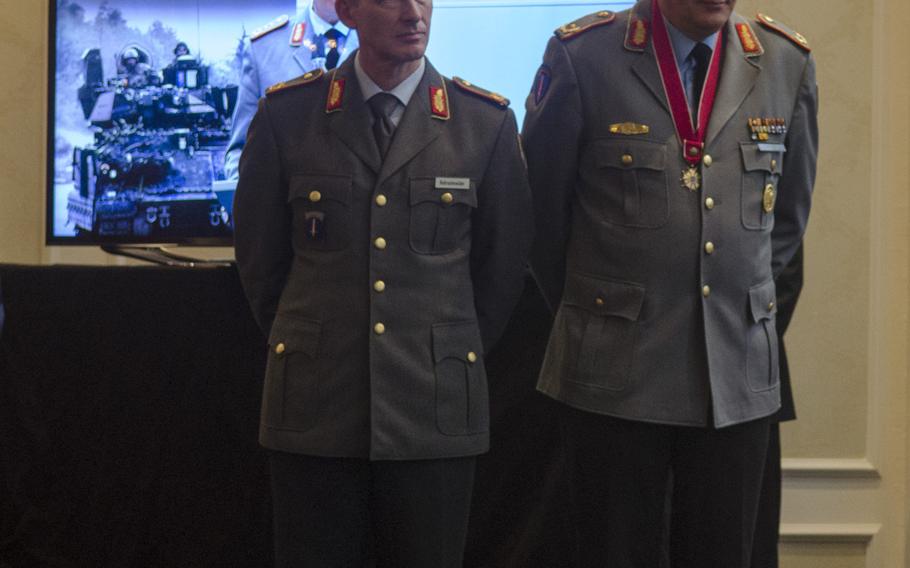 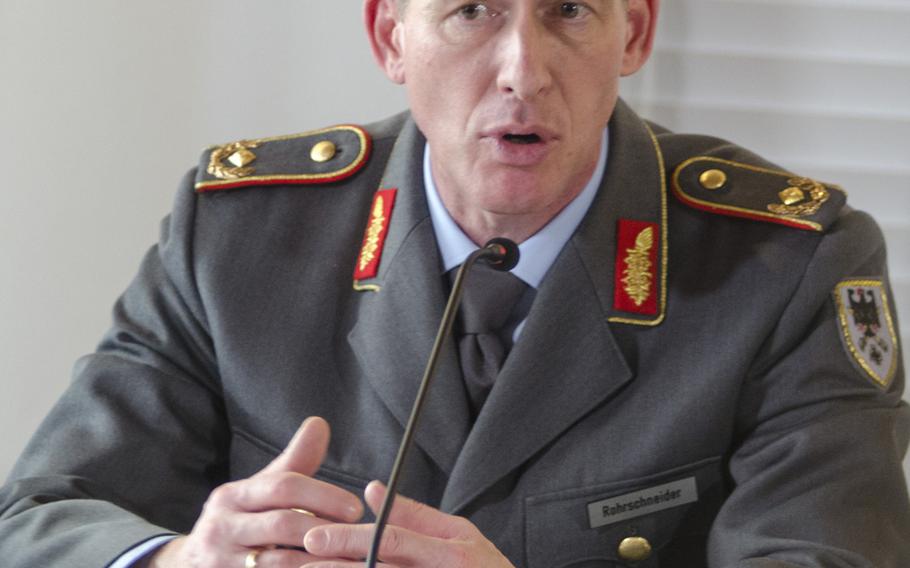 WIESBADEN, Germany — German Brig. Gen. Kai Rohrschneider was welcomed Thursday as the new chief of staff at U.S. Army Europe headquarters — the second foreign officer to occupy a key command post in a headquarters that aims to become more multinational.

Integrating an allied officer into the command’s staff presented challenges, but any disadvantages were outweighed by the benefits of getting an outside perspective, said USAREUR’s Lt. Gen. Ben Hodges.

“I don’t want to oversell it; there’s always a challenge when you integrate an allied officer into a national headquarters,” Hodges said during a ceremony at Clay Kaserne. “But because it has worked so well, we have reached out to other allies and invited them to provide officers either as liaisons or to serve in the fabric of the headquarters.”

Having a German in a prominent role helped USAREUR as it sought to explain its mission to an array of local officials, Hodges said. “He significantly increased our transparency.”

The idea of having a German officer on the command team was proposed by then-USAREUR leader Lt. Gen. Donald Campbell Jr.

“Campbell had the great idea to ask for a chief of staff in a central position to offer this kind of lens in day-to-day business, and this is what I started to give, to give a European contrast — how Europeans might see what the USAREUR is doing for Europe,” Laubenthal said.

As the first German officer in the position, Laubenthal said he hoped he laid the ground work for Rohrschneider to push the mission forward.

“I’m proud to be the first,” Laubenthal said. “I think I was able to make the footprints, where my successor can walk easy.”

Laubenthal took the position during a hectic period. The Islamic State group was on the offensive along NATO’s southern doorstep in Syria, and Russian aggression in Ukraine’s Crimea Peninsula altered the European security landscape, energizing an Army mission in Europe that had been on the decline.

“It would have been a challenge even in peacetime, but in this time, when Brig. Gen. Laubenthal took over, it was a time of crisis,” German Army Chief of Staff Joerg Vollmer said during Thursday’s ceremony. “This was something special — the U.S. giving us a chance to provide one of our generals to be chief of staff of USAREUR.”

Laubenthal’s next assignment will be with the German Army’s 1st Panzer Division, a unit with three German brigades and one Dutch brigade, where he says his international experience will serve him well.

Rohrschneider, like Laubenthal, is a tank officer coming from a brigade command and having also learned his trade in Britain and Canada.

However, in his new post Rohrschneider will exercise less authority than his American counterparts. He will not have disciplinary authority over U.S. personnel, command forces or direct access to diplomatic communications and other sensitive U.S. documents.

Rohrschneider said he was under no illusions how challenging it would be.

“I won’t deny that I see this as a unique opportunity,” he said. “Though I have no doubts that a lot of work lies ahead of me.”

Hodges said the door is “wide open” to officers from other NATO nations and added that an assignment at USAREUR is more than a figurehead post.

“Part of a country seeing it as valuable and worthwhile is that they have to be confident that that officer has access to me and is actually involved, not just a decoration,” he said.