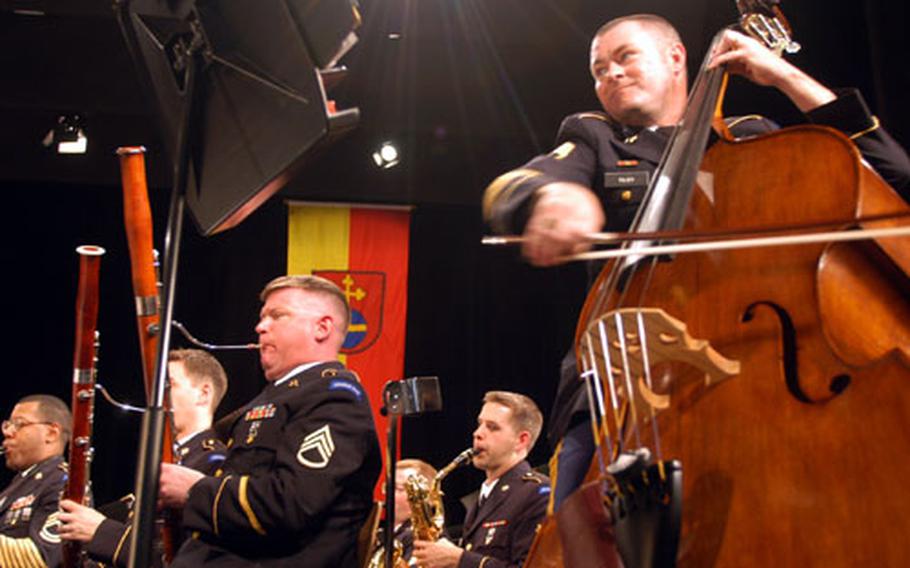 Sgt. 1st Class Larry Tilby, riding the bow across the strings of his bass, performs with the U.S. Army Europe Band on Sunday in Heidelberg, Germany. The band started a two-week road trip through the Balkans this week. (Rick Scavetta / S&S)

HEIDELBERG, Germany &#8212; The U.S. Army Europe Band kicked off a two-week road trip to the Balkans this week with a free concert in Eppelheim.

The performance, titled &#8220;An Afternoon of American Music,&#8221; featured compositions by a wide range of American composers.

The Sunday evening concert at the Rudolf Wildhalle attracted a mostly older crowd of Germans, many who have seen the band play before.

The band is now heading to Slovenia, one of NATO&#8217;s newest members, then on to Croatia. The tour, offered in cooperation with U.S. embassies, features the concert band performing everything from classical music to jazz and pop.

After Eastern Europe, the musicians have a few laundry days back home. Then they are off to Luxembourg and Holland. On Memorial Day, the band will play at the American cemetery in Margraten, Netherlands.

In early June, the band will take part in ceremonies to commemorate the 60th anniversary of the D-Day invasion. Following engagements in France, the band departs for Poland, where it will perform as a guest of the Polish government. That leads it up to Independence Day celebrations in four countries.

The band is especially excited to visit the nations of Eastern Europe, said Lt. Col. Thomas Palmatier, band commander. The concerts are often broadcast on national television networks, he said.

Foreigners also get to meet the troops behind the instruments, an added bonus, he said. That personal contact is part of the band&#8217;s mission, promoting America and its soldiers.