U.S. Army soldiers from the 101st Airborne Division pull security during a training scenario for Shared Accord 2017 at the South African Army Combat Training Center on July 19, 2017. (Tadow McDonald/U.S. Army)

U.S. Army soldiers from the 101st Airborne Division pull security during a training scenario for Shared Accord 2017 at the South African Army Combat Training Center on July 19, 2017. (Tadow McDonald/U.S. Army) 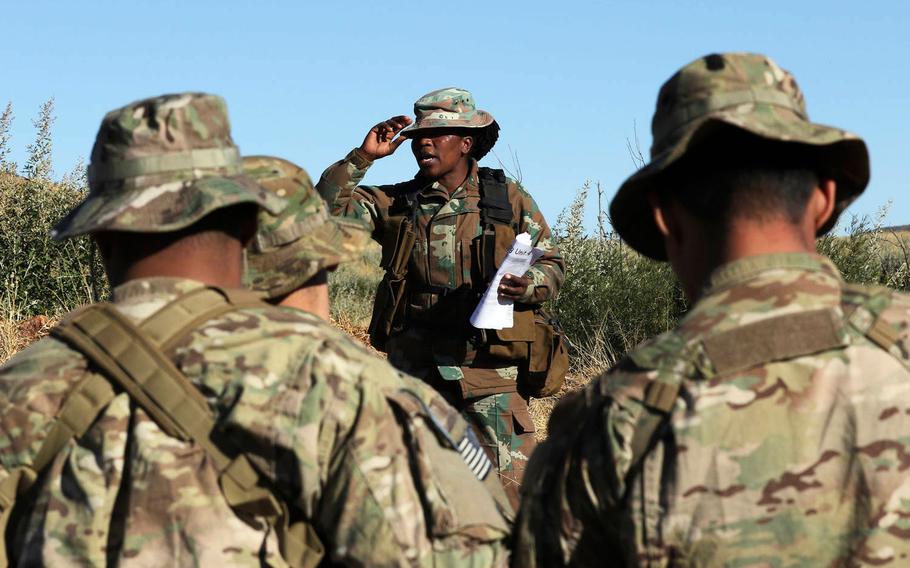 A peacekeeping exercise with U.S. and South African troops headed into its final week as the troops practiced U.N. peacekeeping procedures, trained in detecting roadside bombs and learned “bush craft.”.

The annual Shared Accord exercise, held in Lohatla, South Africa, includes some 300 U.S. troops this year — many of them from the Ft. Campbell, Ky.-based 101st Airborne Division — and 800 South African troops, said Maj. Jeremy Passut, a U.S. Army Africa spokesman.

He said its goal was to build partnership and interoperability between the two militaries and served as “yet another brick in USARAF’s foundation of being a trusted and respected partner in the region and on the African continent.”

The exercise, which started July 17, also provided USARAF and its regionally aligned forces an opportunity to plan deploying and sustaining troops to Africa, rehearse setting up a command post, and practice deploying equipment pre-positioned for contingencies in Livorno, Italy, Passut said.

“When factoring this in with the training that took place at the exercise, it makes for as realistic scenario one could hope for in a training event,” he said.

The exercise, which ends Aug. 3, is to culminate in live-fire exercises.