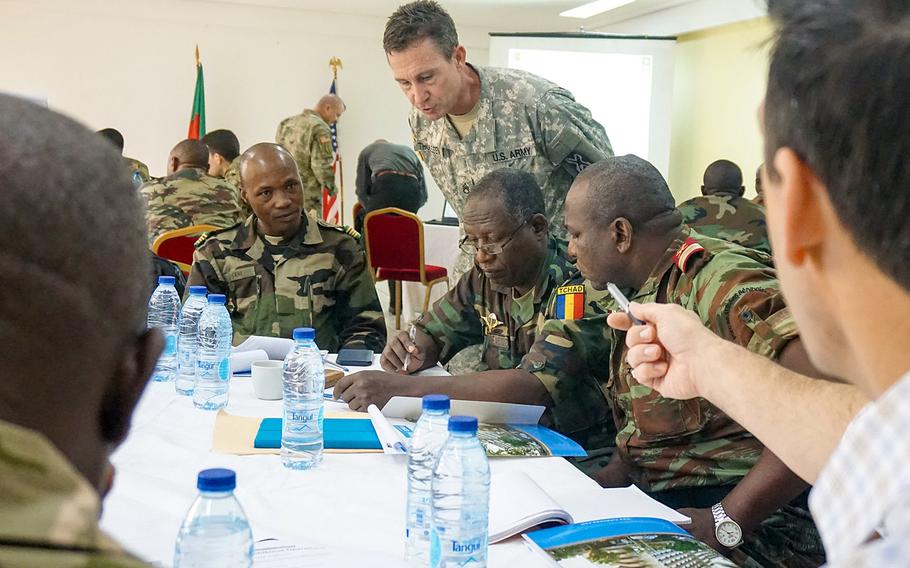 During five days in Cameroon that began on Monday, USARAF’s inaugural Unified Focus exercise is calling upon some 100 field-grade officers, civilian officials and aid-group representatives to consider how to react to plausible crises in the Lake Chad Basin region.

The region, encompassing parts of Cameroon, Chad, Niger and Nigeria, has been the scene of attacks by Boko Haram and clashes with security forces. In the past eight, the years, the conflict has killed an estimated 200,000, forced more than 3 million to flee for their lives and laid waste to formerly fertile lands.

“It’s to think through problems that may or may not happen,” said Col. Mike Zinno, director of USARAF’s civil-military operations division. “We want them to think through things in a more collaborative way. When you start talking about all the challenges in the region, you see how much collaboration is necessary for success.”

Unified Focus, unlike February’s tactical Operation Flintlock, will be a tabletop exercise on countering Boko Haram and other extremist groups. It replaces a previous USARAF annual exercise, Central Accord, which focused on peacekeeping operations.

Participants will include the State Department, the U.S. Agency for International Development, the International Red Cross and field-grade officers with the Multinational Joint Task Force. The task force, authorized in 2015 by the African Union to combat Boko Haram in a more coordinated way, is made up soldiers from Cameroon, Chad, Niger, Nigeria and Benin.

“There’s promise and potential in being able to work together,” Zinno said. “That said, there are still challenges.”

According to a September report by the Institute for Security Studies, the task force, hampered by “political, logistical, technical and financial challenges,” still struggles to demonstrate effectiveness but is “gradually gaining ground.”

One scenario involves a Cameroonian MNJTF unit that has crossed the border into Nigeria in pursuit of Boko Haram terrorists and discovered an abandoned factory used to make improvised explosive devices. The commander, rather than destroying it, wants to use the site, which is filled with explosives, to gather intelligence. The question to participants: How can the MNJTF use intelligence and organizational methods to counter Boko Haram’s use of IEDs?

A second scenario explores what MNJTF forces should do after people with an unclear relationship with Boko Haram surrender themselves. This scenario offers a forum for discussing policies and legal requirements for screening detainees and reintegrating them into society.

Other scenarios deal with second-order effects from the insurgency, such as hunger and threat of starvation gripping parts of the region.

“It’s secondary to Boko Haram coming in and blowing up your school, but it’s equally life-threatening,” Zinno, said.

In fact, according to the United Nations, a half-million children in northeastern Nigeria are so severely malnourished that 75,000 could die by June. In villages freed from Boko Haram, remaining residents have been found eating the only things left — grass and insects.

One vignette explores how to improve the security environment for humanitarian groups operating in the area generally and in zones in which security forces are conducting counter-Boko Haram operations. “The military is only part of the whole thing. The NGOs have a large piece,” said exercise planner Brad O’Neil.

“They bring a different perspective,” said Zino. “They’re on the ground every day.”