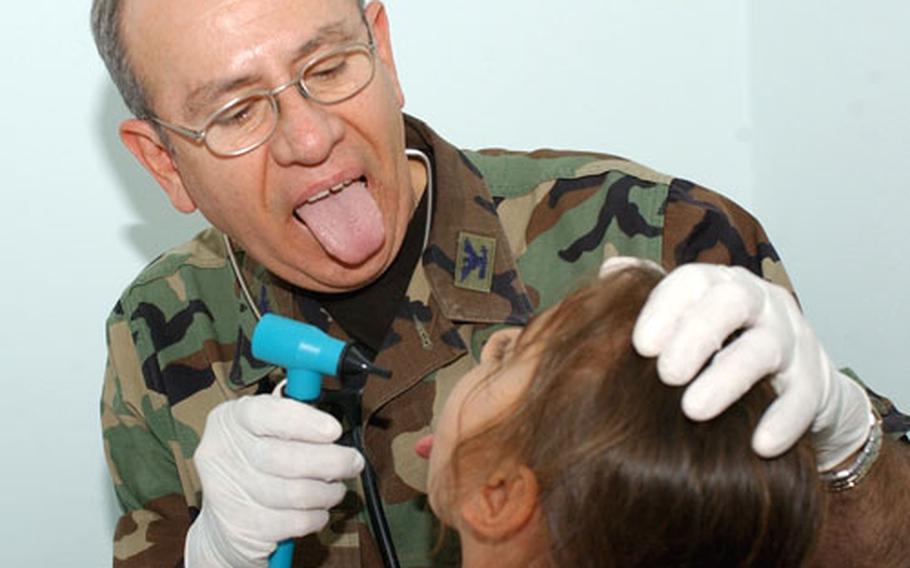 Col. Bernardo Villacis, of the U.S. Air Force School of Aerospace Medicine, uses body language as a form of communication while examining a Moroccan girl in the village of Ifrane, Morocco. (Chrystal Smith / Courtesy of U.S. Air Force)

Col. Bernardo Villacis, of the U.S. Air Force School of Aerospace Medicine, uses body language as a form of communication while examining a Moroccan girl in the village of Ifrane, Morocco. (Chrystal Smith / Courtesy of U.S. Air Force) 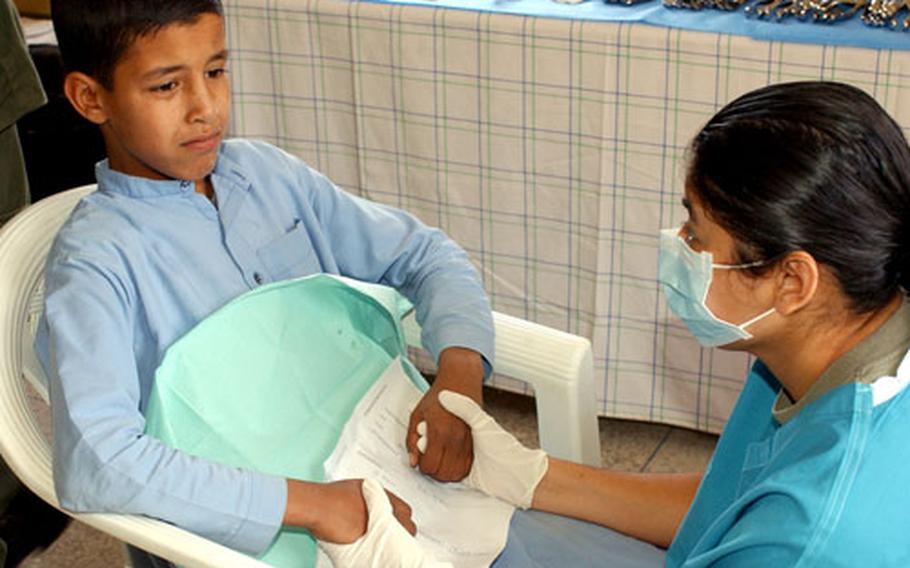 Petty Officer 3rd Class Virginia Treajo, Navy reservist and a dental technician, comforts a young Moroccan boy in the village of Ifrane who is afraid of getting his tooth pulled. (Chrystal Smith / Courtesy of U.S. Air Force) 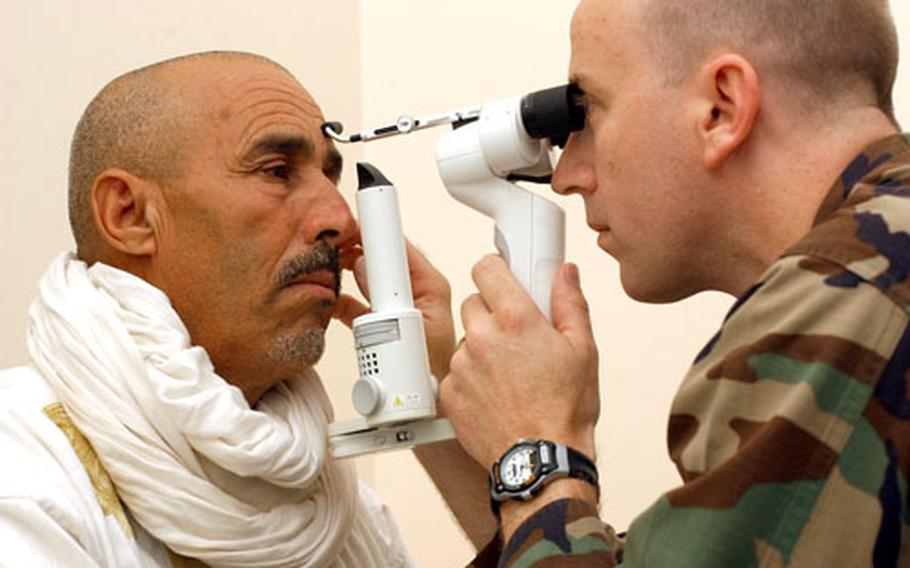 KAISERSLAUTERN, Germany &#8212; Many residents in the small, dusty Moroccan villages of the Sahara Desert don&#8217;t often see a doctor because hospitals are few and far between in the most rural areas.

For U.S. military doctors visiting the towns as part of a humanitarian exercise, that has meant treating some unique and unusual medical ailments they have only read about in text books.

Maj. Lyrad Riley, an Air Force family practice physician stationed in Germany, said a joint team of American and Moroccan doctors and nurses have treated patients for such things as tuberculosis, goiters the size of softballs and intestinal parasites.

The team is in southern Morocco participating in the humanitarian medical aid portion of African Lion 06, an annual U.S.-Moroccan military exercise with the aim of improving better cooperation between the forces.

Moroccan doctors and nurses along with a group of 33 American medical professionals &#8212; a mixture of reserve and active-duty personnel from the Air Force and Navy &#8212; have treated nearly 5,000 people in less than a week.

Each day, they venture from a military base in Guelmim to small towns to provide medical care.

Most of the villages rely on tiny clinics staffed by government-paid nurses to treat residents.

&#8220;They do the best with the resources they have, but their resources are often meager,&#8221; said Riley, who serves as an international health specialist based at the U.S. European Command in Stuttgart, Germany.

He is one of 11 servicemembers on the medical team and stationed in Europe. Ten people from U.S. Air Forces in Europe bases are participating in the exercise.

Lt. Col. Debra Esque, an Air Force reservist, has done similar humanitarian operations across the globe, but she said she learns something new and different on each field exercise.

Some of the other members also have considerable experience providing humanitarian aid across the globe.

He also has traveled to such places as Angola, Senegal and Niger.

He said one of things he has learned so far on this exercise is that some patients in these rural areas of Morocco rely on nontraditional methods of healing.

For example, some of the patients treated by the team have come in with burn scars over some parts of their body.

The patients are believed to have used hot instruments to burn themselves in certain areas to help ward off a pain in their knee or cure their asthma.

The team of American and Moroccan doctors and nurses are treating between 350 and 550 patients a day.

Some of the longest lines for medical care have been for dental work and eye care, Riley said.

The team is using a mobile optometry unit that can make eyeglasses to specific prescriptions on the spot.

The European-designed unit can make glasses for $17 a pair, Esque said.

The exercise, which will include various live-fire and combined-arms training between U.S. and Moroccan troops, ends May 31.