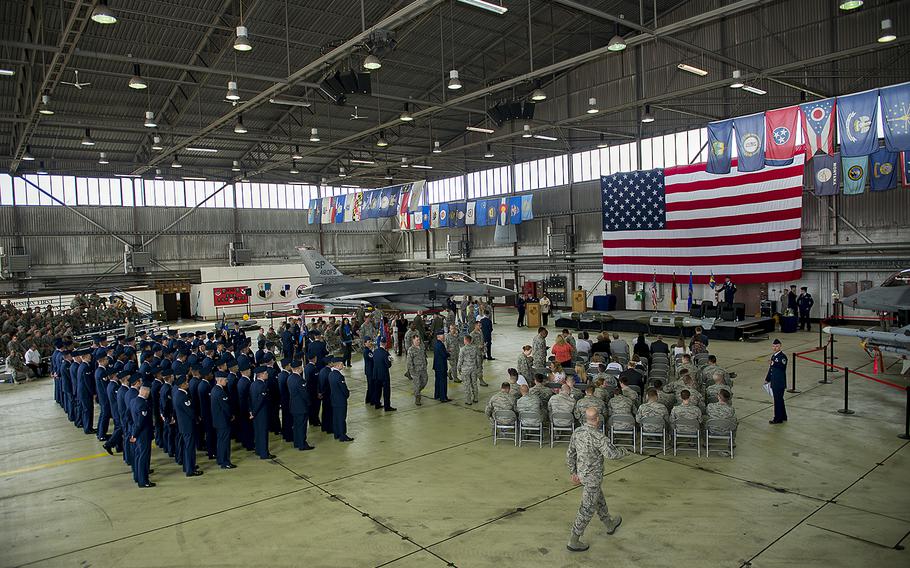 Airmen attend a ceremony in a hangar at a Spangdahlem Air Base, Germany, on June 18, 2015. Air Force officials in Europe will ask the Pentagon to consider forgiving over-payments of roughly $4 million in Overseas Housing Allowances to about 1,500 airmen. (Timothy Kim/U.S. Air Force)

KAISERSLAUTERN, Germany — Air Force officials in Europe will ask the Pentagon to consider forgiving a debt totaling about $4 million in Overseas Housing Allowance overpayments to about 1,500 airmen at Ramstein and Spangdahlem air bases, officials said.

The command is compiling paperwork to submit to Air Staff for what’s called a group “remission of indebtedness” for all airmen affected, said Andy Coggins, chief of financial operations division for Headquarters USAFE-AFAFRICA.

Most of the debt — about $3 million — was incurred at Spangdahlem, where payment discrepancies were found in the housing records of nearly 50 percent of the 2,200 airmen receiving OHA at the time of a March 1 audit.

At Ramstein, about 400 airmen are affected, with the collective overpayment there amounting to about $1 million.

The OHA errors were discovered during a routine Air Force audit that began in November of last year. It sampled about 10 percent of Air Force off-base housing contracts at Ramstein, Spangdahlem and Aviano Air Base in Italy. At Ramstein and Spangdahlem, some discrepancies were found between that amount airmen should be receiving for rent and utilities and what they were actually being paid. Most of the mistakes involving overpayments. Those errors prompted Ramstein and Spangdahlem to conduct a 100 percent review of all its current OHA records, which uncovered a widespread problem in how the allowance was being calculated.

Most of the errors were double utility payments, as recorded on housing contracts that were processed and certified by base housing office employees.

Because the problem was so extensive — so many airmen incurred debt under similar circumstances — USAFE-AFAFRICA decided to seek a group remission, rather than require each airman to individually apply for a waiver, Coggins said.

The Secretary of the Air Force has been given the authority to remit or cancel debt for members on active duty if it’s in the best interest of the government, Coggins said. Air Force guidance says the debt can be canceled in whole or in part.

It’s expected that a remissions board within the Air Force Review Boards Agency, acting on behalf of the Air Force secretary, will review the overall remission package.

The paperwork submitted will consist of “facts and circumstances — how did this occur,” Coggins said, with all affected members identified, amounts of individual debts listed, and the periods when the debts were incurred.

The command is hoping to release the remission paperwork to Air Staff in mid-September, and a decision is expected to take from three to six months, Coggins said.

This is believed to be the first group debt remission package to be considered by the Air Force, he said.

“We’re working very hard on putting together a strong remission package so we can provide the best information we can to the folks who have to adjudicate the package,” Coggins said. “If for some reason that package is not approved, each member still has the individual appeal process. We’ll cross that bridge when we get there.”

Civilians were not included in the housing record review, which looked only at OHA entitlements. The civilian housing allowance — called Living Quarters Allowance — is computed differently, officials said. LQA does not include a separated flat-rate utility allowance as it does for active-duty members.

But the LQA process also has been riddled with problems. In 2013, the Defense Department told about 700 overseas civilian workers in Europe and the Pacific that they erroneously received housing allowances and that some owed more than $100,000. Those civilians had to individually apply for waivers, Coggins said, since no group recourse process for civilians currently exists under the law. In most cases, the government waived those debts, attributing the problem to bureaucratic mistakes.

Coggins has said that USAFE is revising the housing contract form it uses in Germany, the only country where extensive OHA overpayments were found. Housing employees are also receiving additional training, he said.

At a town hall last week at Spangdahlem about the OHA overpayments, one airman questioned how the mistakes were made. “It almost seems incredible to me that something like this would be discovered, considering the housing office has been here for decades,” he said, speaking before a packed auditorium in the base theater. “Were there some new rules that went into effect that nobody knew about? Or was it just pure incompetence?”

Air Force Lt. Col. Christopher Meeker, the 52nd Civil Engineer Squadron commander, said the problem was “systemic,” due to “issues with policy, issues with training, issues with communication up and down.”