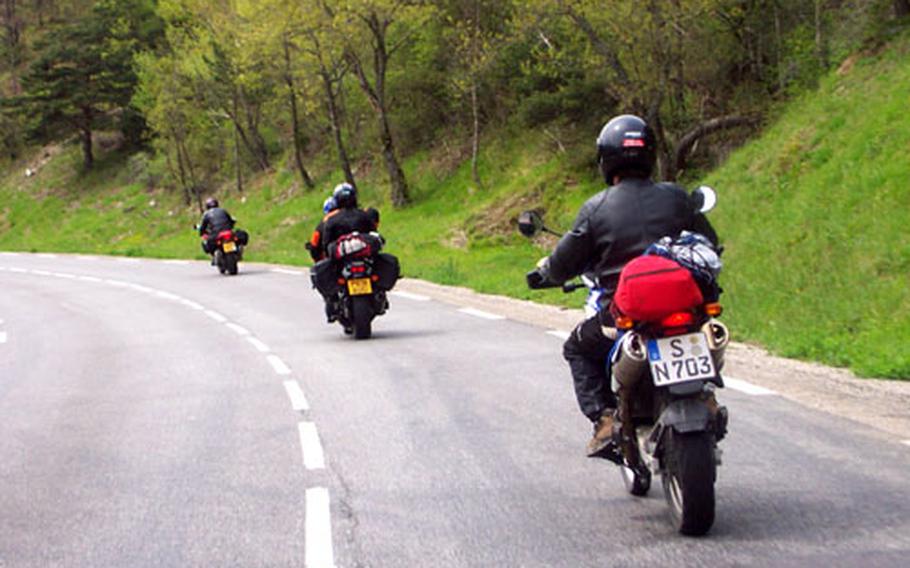 According to U.S. Air Forces in Europe statistics, motorcycles make up less than 10 percent of all its registered vehicles, but in the past six years were involved in 35 percent of its accidents. Because motorycle riding can be more dangerous in Europe than in the States, USAFE has instituted new safety initiatives, training procedures and licensing programs for all motorcycle riders within the command. (courtesy of MCI TOURS)

Riding a motorcycle in Europe can be more dangerous than in the United States, according to Col. Scott Adams, director of safety for U.S. Air Forces in Europe.

That is why USAFE has instituted new safety initiatives, training procedures and licensing program for all motorcycle riders within the command.

&#8220;People [in Europe] drive at different speeds, and right-of-away rules and markings are different,&#8221; Adams said, adding that most curves do not have suggested speed ratings.

&#8220;These motorcyclists put themselves into riskier situations than they would normally face while riding in familiar territory.&#8221;

Adams also said that motorcycling in Europe can be more dangerous because of the faster speeds allowed on highways.

The new rules went into effect this month and apply to all riders of two-wheeled motor vehicles. Among the changes:

&#8226; USAFE members should obtain a stateside motorcycle license prior to arriving overseas. Otherwise, they have to obtain a host nation license.

&#8226; All USAFE personnel who operate motorcycles and have a current license must attend a Motorcycle Safety Foundation course every three years. Motorcyclists who have been in the command more than three years have one year to complete the refresher training.

Commanders and sponsors should notify all inbound motorcycle riders of the current training requirements.

&#8226; The representatives will determine the skill and proficiency level of riders, track refresher training to ensure compliance and advise commanders of the elevated risk situations involving unit personnel.

&#8226; Representatives will identify and recommend mentors to squadron commanders for approval, and conduct periodic safety meetings to address seasonal and regional hazards, recent mishaps and principles of risk management.

According to USAFE statistics, motorcycles make up less than 10 percent of all its registered vehicles, but in the past six years motorcycles were involved in 35 percent of its accidents.

Adams said that during the past 10 years, one-third of the 60 USAFE members who died in traffic accidents were riding motorcycles. He said another 153 were hospitalized with severe injuries.

Maj. Edward Bachl, a spokesman for the USAFE public affairs office at Ramstein Air Base, said the new rules apply only to USAFE members.

&#8220;The MSF course will expand on the current offering by including hands-on training,&#8221; Willoughby said.