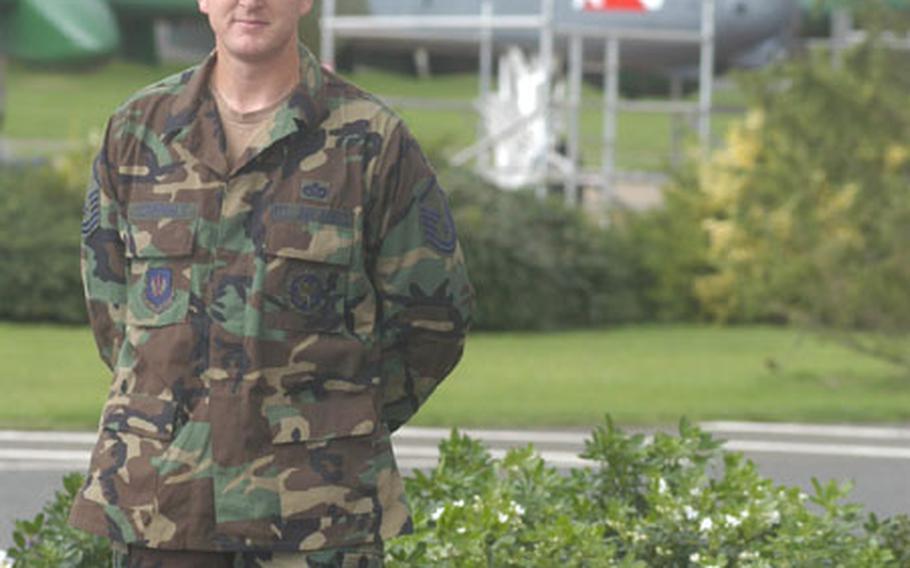 Master Sgt. Jon Stirewalt of the 423rd Civil Engineer Squadron at RAF Alconbury, England, poses at a spot on the base that was named the best-looking small base in the U.S. Air Forces in Europe, part of the command&#39;s Combat Proud program. (Ron Jensen / S&S)

RAF ALCONBURY, England &#8212; An empty building in the heart of RAF Alconbury will soon be put to use, thanks to a $50,000 award the base received for being named the best-looking small base in the U.S. Air Forces in Europe.

The home of the 423rd Air Base Squadron took the prize given to the geographically separated base that best exemplified Combat Proud, one of 14 Combat and Special-Interest Programs established a year ago by USAFE commander Gen. Robert H. &#8220;Doc&#8221; Foglesong.

&#8220;We definitely could not have done it with just a handful of folks working for [the civil engineer squadron],&#8221; said Maj. Matt Greene, commander of the 423rd Civil Engineer Squadron. &#8220;We tried to incorporate everyone, not just the blue-suiters.&#8221;

He said the entire base population played a role in trimming hedges, painting buildings, pulling weeds and everything else that had to be done to take the top prize.

Two weeks ago, RAF Lakenheath, England, was named the best-looking large base in the command and pocketed $100,000.

Greene said the money from the Combat Proud honor would be used to renovate a building constructed in the 1960s as a Stars and Stripes bookstore. It has more than 2,000 square feet, but has no running water.

The money will be used to put in water and toilets, and to install kitchen counters and various other upgrades. It will be a place for community gatherings, particularly for parents with small children. Work will be done by the base staff and will begin in October.

Bases such as RAF Alconbury, which has a total population of 5,000, were not in the original base appearance competition. But a second look prompted a change of heart.

An initial look at the base in December may have given Greene second thoughts, however. It would not have scored well at the time.

Master Sgt. Jon Stirewalt, superintendent of civil engineer operations, said everyone at Alconbury was invited to take part in sprucing up the base, which provides support for the European Command Joint Analysis Center a few miles away at RAF Molesworth.

With a civil engineer squadron member acting as a team expert, teams of volunteers attacked the base &#8212; painting light poles and buildings, trimming and cutting things that needed to be trimmed and cut. Managers of each building were educated on watching out for trash or unsightly items left around the building. All the cigarette butt cans were painted a familiar shade of brown.

When the USAFE inspection team arrived in late August, everything was ready.

Greene said the appearance of a base is important to performing the mission.

Greene said the plan to renovate the building on base fits in with next year&#8217;s Combat Proud competition. That contest will judge bases on the appearance of the interiors of their buildings.