The outside of a new, senior noncommissioned officer town home at Kapaun Air Station, Germany. The military plans to build 863 of the homes in the Kaiserslautern area by 2009 as part of a $399 million project. (Scott Schonauer / S&S)

The outside of a new, senior noncommissioned officer town home at Kapaun Air Station, Germany. The military plans to build 863 of the homes in the Kaiserslautern area by 2009 as part of a $399 million project. (Scott Schonauer / S&S) 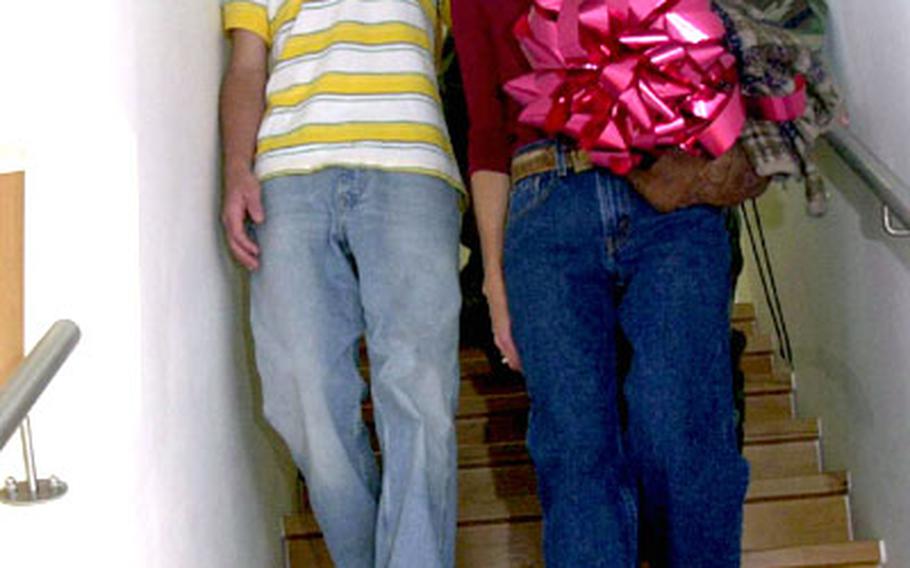 Bradley George, left, Julie George, center, and Master Sgt. Brad George walk down the stairs of a new senior NCO townhouse at Kapaun Air Station on Tuesday. The Georges are the first Air Force family to move into one of the new homes. (Scott Schonauer / S&S)

The tract of 16 new, spacious single-family houses for senior noncommissioned officers and their families offers a glimpse of what military housing will look like in the future.

The Air Force is in the midst of a $1 billion building boom throughout the continent to overhaul housing for airmen and their families, said Charles Friend, a chief engineer with the U.S. Air Forces in Europe headquarters.

The plan to build and improve hundreds of homes from Lajes Field in the Azores to Incirlik, Turkey, is part of a mandate by the Defense Department to repair or replace substandard housing by 2010. Other services have embarked on similar building projects across the globe.

Private contractors will build or repair hundreds of homes in Europe by 2009, with the $399 million housing project in the Kaiserslautern military community being one of the biggest in the Air Force. When construction is finished, there will be 863 new units in the area, which is home to 54,000 Americans.

The Air Force also plans to build 600 units at RAF Lakenheath in England and repair or construct 100 units in Incirlik, Turkey, 100 homes at Lajes Field, and 300 houses at Spangdahlem Air Base in Germany, Friend said.

The townhouses at Kapaun, which is down the autobahn from Ramstein Air Base, replace apartment-style homes that families complained were cramped and noisy.

&#8220;Our housing is adequate, but this is an improvement in that they&#8217;re going to have more space to themselves without having families living on both sides, and up above them and below them,&#8221; said Karen Largent, Kaiserslautern military community housing director. &#8220;We&#8217;re so happy we made this shift because it&#8217;s where we need to go now with individual homes.&#8221;

A pair of senior noncommissioned officers and their families &#8212; one from the Army and another from the Air Force &#8212; received keys to their new homes Tuesday during a ribbon-cutting ceremony. The 16 four-bedroom homes with 2&#189; baths are the first of seven construction phases.

Master Sgt. Christopher Farmer, who is assigned to the 21st Theater Support Command, and his family will be moving into one of the new townhouses this month.

Col. Kurt Lohide, commander of the 435th Air Base Wing at Ramstein Air Base, said the housing overhaul across the region is revolutionary and will be good for servicemembers and their families.

The cost of the housing program in the Kaiserslautern area covers the demolition of the old apartments and the construction of the homes, roads, utilities and playgrounds in the revamped neighborhoods.

The homes are close together but offer more privacy than the apartments.

At Kapaun, a model home will be open on Friday and Saturday from 10 a.m. to 2 p.m. for those who want to take a peek at the new town homes. The model unit will be set up at 2748 A North Dakota street.