USAFE keeps track of registered sex offenders on base 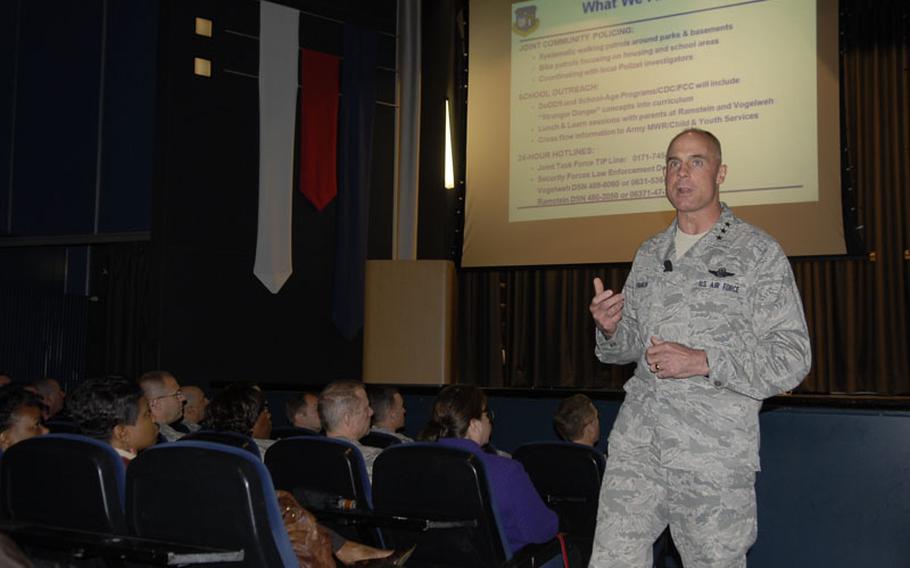 Lt. Gen. Craig Franklin, the commander of the Kaiserslautern Military Community and 3rd Air Force, talks during a May 2 town hall meeting at Ramstein Air Base about child safety issues following reports of child molestations and attempted child abduction at military bases in the Kaiserslautern area. (Jennifer H. Svan/Stars and Strip)

KAISERSLAUTERN, Germany &mdash; When military officials began investigating reports of child molestation and an attempted child abduction on Kaiserslautern-area bases earlier this year, they swiftly eliminated one potential suspect. That individual was questioned because of his status as a registered sex offender.

Base commanders can use the information to deny someone government housing or to restrict a registered sex offender from living near where children may play or attend school or day care on base.

&ldquo;If you, or an authorized dependent who will reside with you, are found to be registered or are required to register as a sex offender under the laws of any state, you could be denied residency in Air Force military, government-managed and privatized housing,&rdquo; the policy document says in part.

The new policy is one of several recent changes made by the military services making it harder for convicted sex offenders to live in base housing. The new rules are particularly significant for overseas bases, which currently lack public sex offender registries and notification laws common in the United States. While military officials say it&rsquo;s unlikely a servicemember would remain on active duty after a court-martial conviction on a sexual offense, especially one of a violent nature, they point out that military family members and civilian employees often have access to base housing.

Air Force officials discussed the new policy during a series of town hall meetings in May to inform base residents of recent incidents involving threats to children. Since January, there have been four reports of child molestations and attempted abductions on Kaiserslautern-area bases.

When the Air Force approved the mandatory-disclosure policy at Air Force bases in the States over a year ago, it allowed overseas commands discretion on whether and how to implement it, said Lt. Col. Bradley Mitchell, USAFE chief of administrative law.

Gen. Mark Welsh III, the USAFE commander, &ldquo;made the decision to have every USAFE base follow this policy,&rdquo; Mitchell said.

Being a registered sex offender or having one in the household doesn&rsquo;t automatically preclude someone from base housing, however. The USAFE policy allows base commanders to make case-by-case decisions based on the specific circumstances, with the goal of &ldquo;keeping the base safe,&rdquo; Mitchell said.

The form asks for specifics on the nature and circumstances of the offense, including the age of the victim at the time the offense was committed.

Depending on particular states&rsquo; rules, there are a range of offenses, some less serious than others, that can lead to someone being required to register as a sex offender, Mitchell said. For example, &ldquo;not to condone any of these,&rdquo; someone who urinated in public while intoxicated may in some jurisdictions be required to register, he said.

Residents already living on base at the time the policy was implemented also were required to complete the disclosure form, USAFE officials said.

&ldquo;There is one registered sex offender on base,&rdquo; Lt. Gen. Craig Franklin, the Kaiserslautern Military Community and 3rd Air Force commander told participants at a May 2 town hall meeting at Ramstein Air Base, called to inform the public about efforts to find a suspect and keep the community&rsquo;s children safe. &ldquo;That individual is not a suspect.&rdquo;

When investigators began looking into reports of child molestation and attempted child abductions, that individual was interviewed, Mitchell said.

No one in USAFE has been forced to move off base or been denied base housing since mandatory disclosure began, Mitchell said.

However, because the sex offender form is only required of those applying for base housing, there is no way to track those living off base.

Registered U.S. sex offenders who come to Germany with the military, whether on active-duty or as a family member, would not have to report their status to German authorities, said Helmut Bleh, chief prosecutor for the city of Kaiserslautern, home to the largest U.S. military community overseas.

Also, unlike in the United States, there are no public sex offender disclosure laws in Germany. For example, U.S. federal laws make it mandatory for states to create public registries of people convicted of sex crimes, and in some cases, require other forms of community notification. Germany and most European nations don&rsquo;t maintain public sex offender registries.

Germany, however, maintains a private database of the names of convicted sex offenders, to which criminal prosecutors and law enforcement officials have access, said Rudolf Egg, a forensic psychology professor and director of the Center for Criminology in Wiesbaden, Germany.

USAFE has asked the Air Force to examine the legal and policy issues associated with implementing a screening program that would identify sex offenders before they receive orders to move overseas, said an Air Force official speaking on background.

&ldquo;It would give commanders an opportunity to deal with these instances on a case-by-case basis before they&rsquo;re already here in the country,&rdquo; the official said.

An Air Force official at the Pentagon said that, currently, no overseas assignment restrictions or limitation codes exist &ldquo;to identify this category&rdquo; of airmen, but that the policy is under review.

The Navy and Marine Corps already prohibit any sailors or Marines or sponsored family members who are sex offenders from being assigned overseas, absent a waiver, according to a policy issued about four years ago. Those services also prohibit sex offenders from occupying base housing, as per guidance issued in 2008.

The Army is also evaluating whether to screen military households for convicted sex offenders before moving them overseas, said Paul Prince, an Army spokesman at the Pentagon, in an email.

In 2006, the lack of an overseas sex offender registry at bases abroad emerged as a leading issue from an Army Family Action Plan conference in U.S. Army Europe. Conference recommendations included requiring all sex offenders holding a DOD identification card who are assigned or residing overseas to be entered into a registry comparable to those in the United States. In 2009, the secretary of the Army expanded the issue to address sex offender management across the Army, according to Army officials.

The Army is looking at requiring any registered sex offender who works or lives on post to register with the provost marshal office, Prince said. Currently, only soldiers convicted at court-martial of qualifying offenses have to register, Prince said.

The service is also currently working to implement a policy that will give senior mission commanders the authority to publicize the names of sex offenders within their command, Prince said, declining to release details on how this might work because the policy isn&rsquo;t final.

The Air Force does not disclose any information about registered sex offenders, such as the offense or where the person lives, and would be unlikely to do so.

&ldquo;Their privacy interests would likely lead us not to release individual names or addresses&rdquo; or other specific details, Mitchell said.

Legislation is pending that would create a DOD central database of all military members convicted of sexual assault that would include, among other items, a photograph of the individual, criminal history and a DNA sample. The information would be shared with a national sex offender registry, according to the proposed legislation.

Meanwhile, if an incident similar to the cases reported on Kaiserslautern-area bases were to occur off base, an American could go to the local police and file a report, said Egg.

&ldquo;The police then can take action and can check if any sex offenders live in the area where the incident happened,&rdquo; he said.