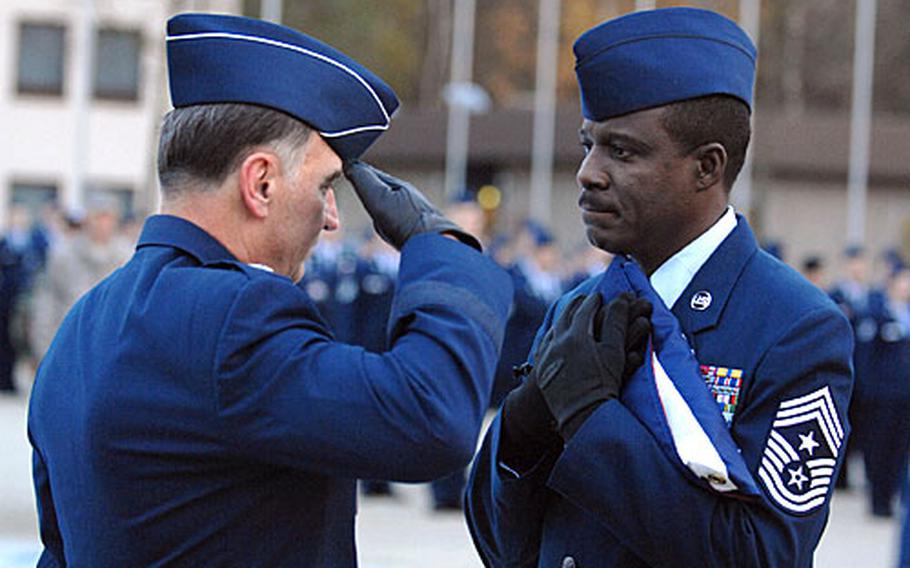 The U.S. Air Forces in Europe threw a party Friday to celebrate the upcoming retirement of its top-ranking enlisted airman.

Command Chief Master Sgt. Gary G. Coleman, who will retire on May 1, was feted by several hundred guests during the retirement ceremony at the Kisling Non-Commissioned Officer Academy Auditorium at Kapaun Air Station in Kaiserslautern, Germany.

Coleman became the top enlisted adviser to the USAFE commander in August 2003.

Coleman was credited with spearheading an annual $9 million quality-of-life program for the command&#8217;s 48,000 members, as well as developing training programs for enlisted airmen of European and African allies.

The graduate of Louisiana Tech University and Chapman University in California is known for promoting the leadership responsibilities of staff sergeants, technical sergeants and other younger noncommissioned officers.

&#8220;This Air Force is in the midst of some challenging times,&#8221; Coleman was quoted as telling airmen in the audience.

&#8220;I can&#8217;t remember when the need, the demand for leadership at the NCO level has ever been greater than it is today.

Coleman began his Air Force career in 1977. He was command chief master sergeant at the 12th Air Force at Davis-Monthan Air Force Base, Ariz., before moving to the Ramstein, Germany-based USAFE.