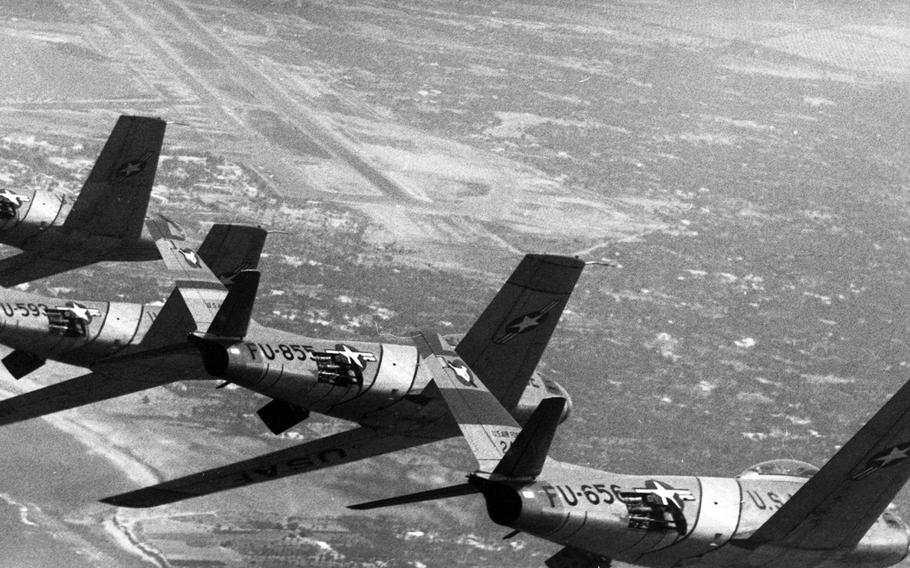 Buy Photo
Sabrejets of the 50th Fighter-Bomber Wing peel off in the skies over Wheelus Field, Tripoli, during the first annual U.S. Air Forces in Europe gunnery meet in August, 1955. (Red Grandy/Stars and Stripes)

WHAT MAKES a crack jet team run at a gunnery meet, and fly home with the bacon?

There's more than one answer to that question. It's the pilots, of course, who match flying skill with firing skill. It's the leaders and commanders who demand and get the best. And at a gunnery meet, like the first annual USAFE fighter-gunnery and weapons meet held at Wheelus Field, Tripoli, it's also the cooperation of scores of judges and committees who count the holes in targets, count the bullets that are loaded into planes, and the management and planning behind the meet.

But it's also a group of airmen who, stripped to the waist and tanning in the blazing African heat, check and recheck every plane for mechanical efficiency, service every intricate tube and wire, clean guns and change tires. It's the airmen who cheer the pilot, pray for a trophy, and who - when the scores are being tallied in a dusty airless tent - yell praise at every winning number. When a pilot brings in a winning score, a dozen airmen can make more noise than a crowd at a football field as old U. scores the winning touchdown.

The story behind the meet began last December when the 12th AF, commanded by Maj Gen Robert M. Lee, held a gunnery meet of its owns at Wheelus. By mid-1955 the three air forces of USAFE, the 12th, 3d and 17th, were ready for wider competition. A three-phase meet was set up: Phase I, air-to-air and air-to-ground firing; Phase II, special weapons; and Phase III, rocket, competition. Phase 1, a more conventional type of firing, was held during the middle section of the month-long meet.

Top among seven trophies in Phase I, for the best firing team, went to the 50th Fighter-Bomber Wing team of Hahn Air Base. Taking the 50th as a typical top-firing team and a typical overall meet winner, a glimpse at the flight line and its mechanics provides some of the answers behind the team's efficiency.

Each team of six planes was allowed 5,000 pounds of logistic equipment and 25 supporting personnel - the men in maintenance, armament, supply and radio sections.

S Sgt Bernard Lallier of the 417th Fighter-Bomber Sq explained his and other airmen's work behind scenes of the 50th's team. Lallier was one of several crew chiefs. He and other airmen slept in tents near the shore of the Mediterranean, perhaps the coolest part of their day. Work call came at 7:15 am.

"We had an hour to check our planes," Lallier explained, "and make sure they were properly serviced. And in between gunnery flights all planes were kept under constant surveillance by all team members during the day.

"In the morning we gave the jets a 'preflight' check. All engines and units were gone over thoroughly to see if they could get up to at least 40,000 feet, stay there and get back."

Crew chiefs have added responsibility. "When a plane comes onto the line," Lallier said, "I'm responsible for wing tips and all ground handling. I direct the pilot to come in. Then I chock (wedge) the wheels steady and drop doors so the crew can carry on engine inspection and service gauges."

All these routine matters were carried on to a high degree of skill at Wheelus. The airmen strapped the pilots in the cockpits, helped them out and listened to any beefs they had about the way the planes performed in the air - all without ceremony or temperament.

While a crew chief began preparations for a new flight, the armorer, the bullets already counted by an official, cleaned the .50-cal machine guns and loaded them.

"We refuel and put oxygen in, make minor repairs and most of us are qualified to work on jet engines," Lallier said. "Although we can't do it here, we can install new engines. But here we pull engines and replace leaky oil tanks. We really run a garage right here on the line:"

The crew stayed on the line until every plane after the last gunnery mission was in perfect order.

Lallier gave credit to the inspection team on his home base for helping get the planes to the gunnery meet. "They helped win this meet just as much as anyone." His words were similar to those of Lee, who, during the award ceremony, said "the scoreboard is not the only story. The weapons, armament, people, crew chief, home stations and management, all made this a good meet."

Just before the awards ceremony, airmen left the flight line temporarily to gather around the scoring tent. When the 50th was announced as winner, two 50th team mechanics broke through the crowd, lifted Van Etten to their shoulders and carried him toward the speakers stand, while the rest of the airmen set up a noise like a jet.