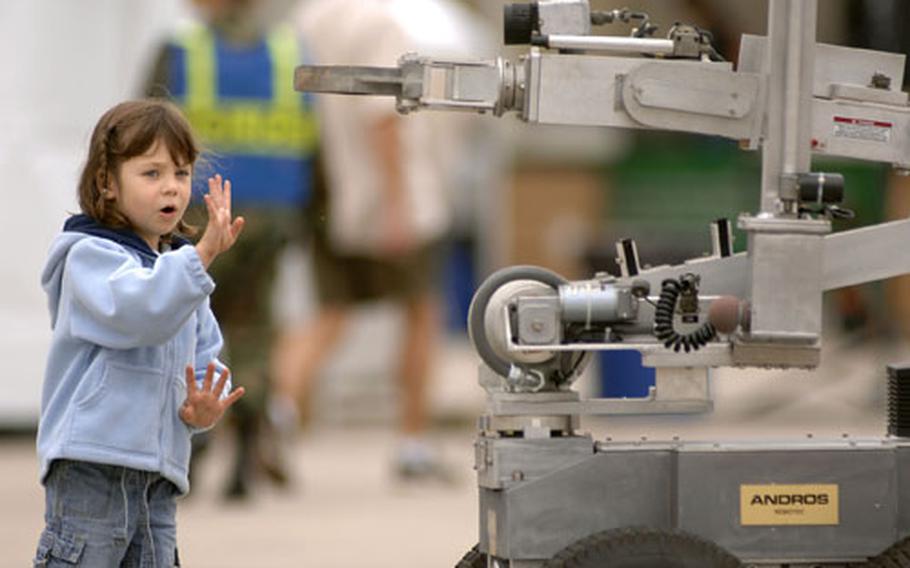 Mia Shunkle, 4, shows an Andros “Rons” robot how old she is. The robot demo, put on by the 435th Civil Engineering Squadron’s explosive ordnance disposal unit, gave spectators a first hand look at how IED’s are handled by the remote controlled machines. (Ben Bloker / S&S)

Mia Shunkle, 4, shows an Andros “Rons” robot how old she is. The robot demo, put on by the 435th Civil Engineering Squadron’s explosive ordnance disposal unit, gave spectators a first hand look at how IED’s are handled by the remote controlled machines. (Ben Bloker / S&S) 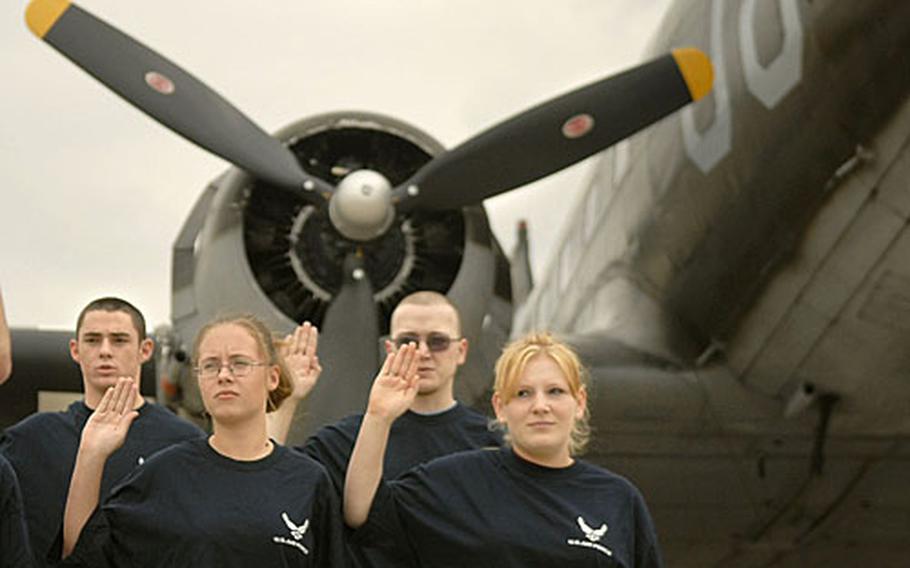 Amber Hill, right, and Tanya Goodhile, along with eight other future airmen, enlisted in front of a historic C-47 during the Air Force 60th anniversary celebration. Col. Earl Matthews, the 435th Air Base Wing commander, gave the oath to the new recruits. (Ben Bloker / S&S) 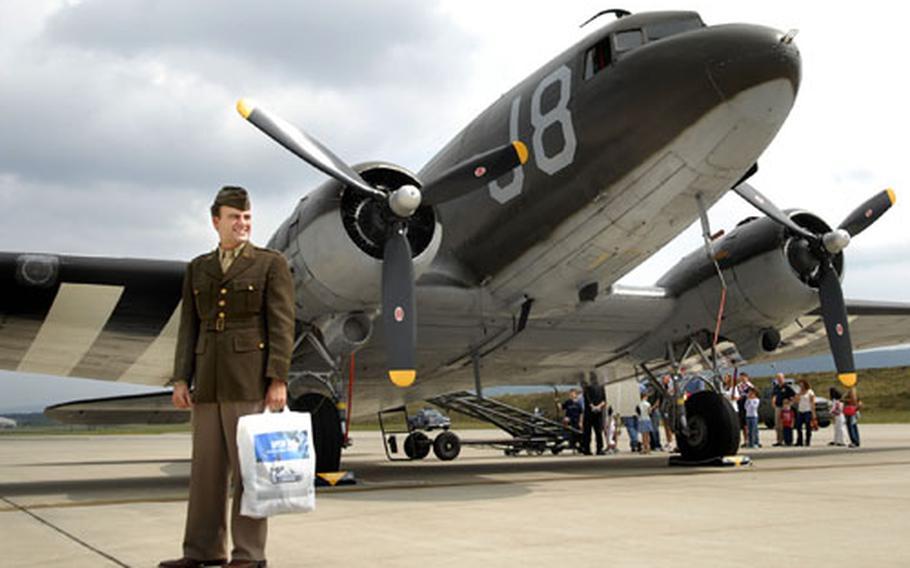 Tech. Sgt. Daniel Via, an airman assigned to the U. S. Air Forces in Europe directorate of personnel, enjoys being a captain for a day during the Air Force 60th anniversary celebration at Ramstein Air Base. (Ben Bloker / S&S) RAMSTEIN AIR BASE, Germany &#8212; A pair of Air Force legends joined airmen on Saturday to celebrate the service&#8217;s 60th anniversary.

Retired Col. Gail Halvorsen, known as the Berlin Airlift &#8220;candy bomber,&#8221; and retired Col. Leo Thorsness, a former Vietnam prisoner of War and Medal of Honor recipient, were the guests of honor at the birthday party at Ramstein.

Halvorsen, 85, said returning to Germany and being a part of the festivities brought back memories of the service&#8217;s first year, when he was a pilot taking part in the Berlin Airlift. He is known as the candy bomber for dropping candy via tiny parachutes to German children during the Berlin blockade in 1948.

The Air Force&#8217;s actual birthday isn&#8217;t until Sept. 18, but U.S. Air Forces in Europe headquarters along with airmen in the Kaiserslautern area celebrated the anniversary on Saturday in one of Ramstein&#8217;s massive hangars.

Halvorsen signed autographs and talked about his day as a pilot flying the C-47. He said the response from the Germans helped keep morale high among the aircrews during the Berlin Airlift.

Thorsness, who wore his Medal of Honor around his neck, gave the keynote speech in the hangar. He earned the prestigious medal during a mission to attack surface-to-air missile sites in North Vietnam in 1967, but he did not know he received the award until years after the fact.

He was shot down and spent six years as a prisoner of war.

He said the major difference between the airmen when he served and the airmen now is that servicemembers today are smarter.

Tech. Sgt. Rebecca Arbona, who works in personnel for USAFE, said what separates the Air Force from other services is how the service treats its people. Her father served in the Air Force and her husband is an Air Force policeman at nearby Sembach Annex.

President Harry S. Truman created the Air Force when he signed the National Security Act of 1947.