RAF Mildenhall switchboard supervisor Theadric Hannah helps out answering phones Friday after releasing most of his staff for the holiday weekend. Switchboard operations are being consolidation through U.S. Air Forces in Europe, meaning operators such as Hannah will soon be looking for new jobs. (Ben Murray / S&S)

RAF MILDENHALL, England &#8212; Air Force community members in England may have noticed a slightly different accent on the phone when calling the operator lately.

Instead of a British accent from the voice on the other end of the line, a person with a distinct German inflection may have given them the number for the local library or car care center.

&#8220;USAFE consolidated switchboard, how may I help you?&#8221; is now a greeting most callers get when dialing their local operator&#8217;s number.

The change in accents is the latest piece of an expansive program to streamline switchboard operations throughout U.S. Air Forces in Europe and merge them into a single, central call center expected to handle up to 2.15 million calls a year, officials from USAFE&#8217;s Directorate of Communications and Information said.

Earlier this month, bases in the United Kingdom began switching their calls to the in-progress centralized call center, at Ramstein Air Base, Germany.

By the end of January, all calls to operators originating from the U.K. will be handled by the consolidated switchboard, joining Germany as the second country in USAFE to direct its switchboard operations. The program could expand, too, to include other USAFE installations in countries such as Italy and Turkey, though officials said the matter is still under review.

&#8220;There is a current USAFE study looking at consolidating telephone operations at other locations, but until all the manpower studies and host-nation notifications are complete, it would be premature to discuss [the issue],&#8221; said USAFE spokeswoman Maj. Alisen Courtemanche.

The consolidation is part of an Air Force effort to reduce costs and streamline operations as budgets for the force tighten, said Col. Joe Itz, chief of the plans, policy and resources division for the communications directorate at Ramstein.

To make switchboard operations more efficient, USAFE adopted an approach similar to that used in the world of corporate call centers, which are often centralized in places that transcend geography, such as India, said Maj. Scott Stevens, chief of the directorate&#8217;s strategic plans branch.

Placing all the operators in a single place allows for more efficient processes in hiring, equipment and training, Itz said. In the case of the U.K., it also allows USAFE to stop paying salaries in the dominant British pound.

By the time Germany and the U.K. are both fully running on the consolidated system, the cost of running switchboard operations will have been cut to $2 million from $3.5 million annually, a 42 percent cut, Itz said.

But leveraging technology for efficiency means cuts to manpower, and USAFE will reduce the number of operators it has fielding its calls, officials said.

In the U.K. alone, where operators had answered 815,615 calls this year by Dec. 18, all 18 operators, some of them had 15 years or more on the job, have been pushed into new positions or accepted severance packages as the office shuts down, said Theadric Hannah, switchboard supervisor for the U.K. at RAF Mildenhall.

In all, the combined Germany/England switchboard will employ 33 operators, down from the 53 that worked the phones when the offices were separate, Itz said.

But customers shouldn&#8217;t feel any effects &#8212; such as increased hold times for operators &#8212; from the reduced manpower because of the technological improvements, he said.

The consolidation should be mostly transparent for the users because customers still dial the same local number for the operator to reach the switchboard, and policies and procedures for morale calls will remain unaltered, officials said. 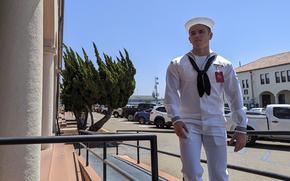