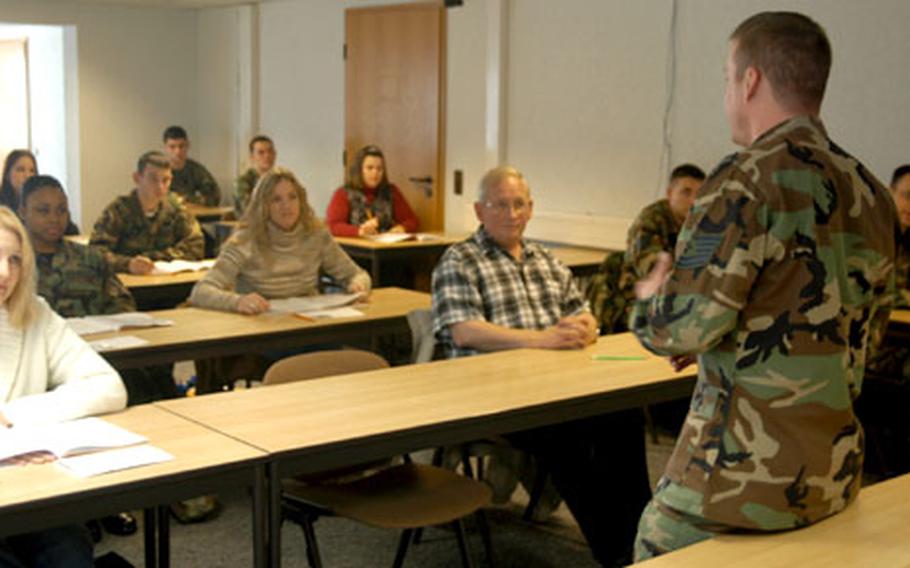 RAMSTEIN AIR BASE, Germany &#8212; U.S. Air Forces in Europe is looking to cut wait times and administrative headaches for airmen on their way to a new assignment in Germany.

The command is in the final stages of testing an online version of the driver&#8217;s exam that servicemembers can take before they ever set foot in the country.

The program allows active-duty servicemembers moving to Ramstein or Spangdahlem air bases to retrieve study materials from the Internet and take the test at five air bases in the United States, said Tech. Sgt. Jeff Freeman, a software development manager in the USAFE Computer Systems Squadron.

When airmen arrive at Ramstein or Spangdahlem, all they have to do is take the eye exam, pay the registration fee and sit through the local orientation course, cutting out the need for a test appointment in Germany.

At Ramstein, which administers about 7,500 tests annually, airmen sometimes have to wait for an appointment for more than a week during heavy turnover time, said Tech. Sgt. Justin Levesque, noncommissioned officer in charge at the Ramstein testing facility.

The online test is the same two-part exam as the paper version administered in Germany, Freeman said, with the road sign and multiple-choice sections.

The new site does not, however, eliminate the need for an appointment to take the test in the United States. An authorized proctor still must administer the test, and airmen cannot download the study materials or practice test from a home computer.

Test results are retained in an online database allowing USAFE personnel to retrieve an applicant&#8217;s records in Germany without seeing proof that the person passed before arriving, Freeman said.

Statistics on commonly missed questions are also compiled by the system, he said, generating a database of information that will help developers improve test materials in future versions.

The new program, coordinated with U.S. Army Europe, which distributes driver&#8217;s licenses to airmen in Germany, still has to go through final testing before being offered on a wider scale.

Freeman said early feedback on the exam has been positive, and USAFE is considering offering the option to Air Force family members at more air bases when a final version is approved.