USAFE commander to retire after 33 years in military 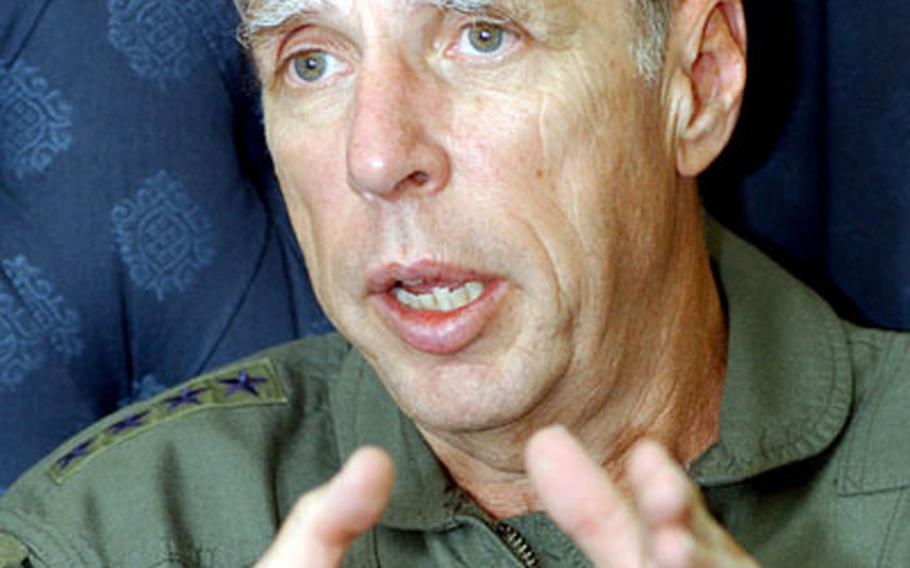 KAISERSLAUTERN, Germany &#8212; One of the U.S. military&#8217;s most recognizable generals in Europe is leaving the military.

His retirement is effective Feb. 1, but it has not been determined when he will leave the top USAFE post at Ramstein Air Base, Air Force spokeswoman Maj. Angela Billings said. It is possible that Foglesong could hand over command sooner. He has led the Air Force&#8217;s largest command in Europe since August 2003. Commanders typically serve about two years.

Foglesong has a doctorate in chemical engineering from West Virginia University and often goes by his call sign, &#8220;Doc.&#8221;

After arriving at USAFE more than two years ago, Foglesong quickly made his mark. The command motto he coined &#8212; &#8220;Bring Your Courage&#8221; &#8212; can be found at Air Force bases throughout Europe, from the headquarters&#8217; Web site to base welcome signs.

He oversaw the merger of the two numbered air forces in Europe and the creation of the education Centers of Excellence for Expeditionary Operation, Air Dominance and Joint Fires.

He also created 15 region-wide programs that focus on everything from building better ties with senior leaders to sprucing up bases.

While airmen know him for the many programs and projects he created and directed, he also is recognized by servicemembers and Department of Defense civilians around the globe for his American Forces Network TV spots.

Few commanders have used television to get their message out with such frequency and regularity. Many of Foglesong&#8217;s spots start with the general wearing a flight suit and sunglasses, pointing to his F-16 fighter and saying, &#8220;I just got finished flying ol&#8217; Triple 7.&#8221;

Once his retirement is official, Foglesong plans to start a foundation in his home state of West Virginia for college-bound high school seniors.