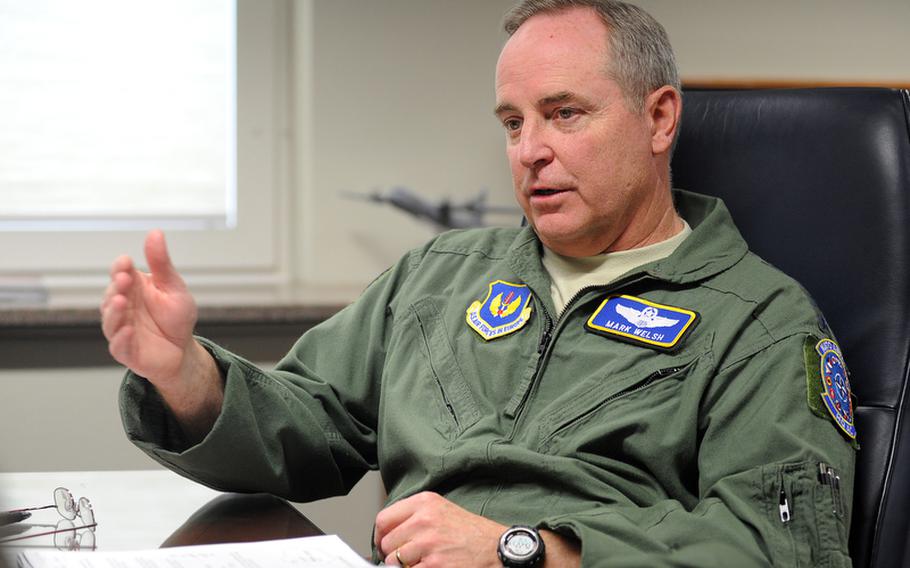 Buy Photo
U.S. Air Forces in Europe commander Gen. Mark A. Welsh III talks about the USAFE mission in the face of budget cuts, the Pentagon's strategic shift in focus to other areas of the globe, and USAFE support for U.S. AFRICOM, in his office at Ramstein Air Base in April, 2012. (Michael Abrams/Stars and Stripes)

RAMSTEIN AIR BASE, Germany &mdash; At a change of command ceremony in March, the commander of U.S. Air Forces in Europe expressed some sadness over the pending departure of the last U.S. Air Force A-10 squadron on the continent.

But in an interview this week with Stars and Stripes, Gen. Mark A. Welsh III said emotion plays no role in deciding what stays and what goes as the military consolidates assets in Europe and shifts resources elsewhere.

Welsh said USAFE will downsize by about 1,700 active-duty and civilian personnel, shutter two squadrons &mdash; the 81st Fighter Squadron at Spangdahlem Air Base, Germany, and the 603rd Air Control Squadron at Aviano Air Base, Italy &mdash; and consolidate its numbered air forces, with the planned inactivation of 17th Air Force.

That&rsquo;s all part of a larger force restructuring plan that includes the departure of two Army infantry brigades from Europe and the closing or repurposing of some bases.

Welsh said he doesn&rsquo;t know if there will be further drawdown of U.S. Air Forces in Europe, but said the process is still under review.

&ldquo;It all comes down to what options does the president want,&rdquo; he said.

Welsh said it&rsquo;s his job to make those options clear.If the Pentagon wants the option &ldquo;to respond very quickly,&rdquo; as the U.S. military did in Libya, &ldquo;you have to have the force structure in Europe to do it,&rdquo; Welsh said.

USAFE is going through &ldquo;every facility &hellip; every unit &hellip; every mission tasking we have,&rdquo; Welsh said. &ldquo;Our goal is to put together a very logical, fact-based picture of what is available and what does it provide decision-makers in the United States, and if they decide that they can wait longer to get it, then we don&rsquo;t need it in Europe.&rdquo;

&ldquo;I think this will be ongoing for a long time,&rdquo; he added, &ldquo;and I think it&rsquo;s a fair process. This isn&rsquo;t new, but it&rsquo;s something that we continually have to refine because the world does change around us.&rdquo;

Some of those changes already are evident. USAFE is a key part of U.S. European Command&rsquo;s ballistic missile defense mission in Europe, which is expected to grow over the next eight to 10 years, Welsh said.

And, with the scheduled inactivation of 17th Air Force on April 20, USAFE will be designated the new air component for U.S. Africa Command, while still overseeing air operations in Europe.

Between Europe and Africa, the U.S. Air Force supports about 105 countries, Welsh said.

Two years ago, the Air Force conducted about 1,700 engagements on the two continents; last year, it was about 2,200.

But Welsh doesn&rsquo;t expect to get more aircraft or assigned forces, which means the command probably won&rsquo;t be able to support as many operations for EUCOM and AFRICOM as in the past, he said.

&ldquo;In my mind, we&rsquo;re going to have to do a better job of prioritizing, and do fewer activities,&rdquo; he said. &ldquo;I think that&rsquo;s just the reality of the situation, and I think that&rsquo;s OK. I don&rsquo;t think that affects our ability to do those key things that the commanders of EUCOM and AFRICOM really need us to do.&rdquo;

And it will be up to EUCOM and AFRICOM to set those priorities, Welsh said.

&ldquo;We&rsquo;ll support everything we can up to the point where we don&rsquo;t have the resources to do both, and then we&rsquo;ll ask them to get together and figure out the priority.

&ldquo;The important thing for us to do in Africa is to make more meaningful connections in Africa over time,&rdquo; Welsh said. Current 17th Air Force commander, Maj. Gen. Margaret Woodward, did &ldquo;an exceptional job &hellip; of getting to know and work with African air chiefs in a way maybe that hasn&rsquo;t been done before,&rdquo; Welsh said. &ldquo;That was the beauty of having 17th Air Force as a dedicated numbered air force supporting U.S. Africa Command.&rdquo;

USAFE is also preparing to lose an entire squadron of A-10 Thunderbolt IIs, the last remaining Air Force A-10s in Europe.

In remarks last month at the 3rd Air Force change-of-command ceremony, Welsh fondly recalled flying A-10s in the early 1980s in the United Kingdom, where at one point six A-10 squadrons were based.

&ldquo;It was pretty much heaven for a young fighter pilot,&rdquo; Welsh said.

But Welsh talks matter-of-factly when he discusses the loss of the A-10 as a commander and the effect the squadron&rsquo;s departure may have on the USAFE mission.

&ldquo;It&rsquo;s not us losing an A-10 squadron,&rdquo; he said of the elimination of about 20 A-10s and 525 airmen positions at Spangdahlem. &ldquo;It&rsquo;s part of a larger Air Force plan &hellip; being driven by the resource environment. There&rsquo;s not a single commander in the field who wants to lose anything. But the reality is, this is part of the decisions that had to be made.&rdquo;

Relations with NATO allies and other partners will continue to be a key focus area for USAFE, Welsh said, the importance of which is underscored in the war in Afghanistan and ballistic missile defense.

About 10 years ago, &ldquo;if you would have told me that 12 NATO air forces would be operating together in Afghanistan, conducting operations day-to-day, I&rsquo;d have said &lsquo;you&rsquo;ve got to be kidding me,&rsquo; &rdquo; Welsh said. &ldquo;And if you&rsquo;d told me that NATO was going to be taking on ballistic missile defense of Europe, I&rsquo;d have said you were smoking rope, because it was unimaginable then.&rdquo;

Even as USAFE figures out what the new U.S. defense strategy &ldquo;means to us, the strategic partnership focus on Europe &hellip; remains critical,&rdquo; Welsh said. &ldquo;We have to figure out how to maintain that partnership, and not just hang on by our fingernails, but make it stronger.&rdquo;

USAFE has other vital missions going forward, some of which are tied to supporting U.S. Central Command.

&ldquo;The Middle East is not going away as a focus area for the United States of America, and so the U.S. military must be ready to respond in a meaningful way when required,&rdquo; Welsh said. Places like Ramstein and Spangdahlem, &ldquo;which are the core of our mobility footprint in Europe, are essential to supporting that enduring mission of air mobility.&rdquo;

Welsh said it&rsquo;s not his job to back a particular option.

And if recent news reports are correct, Welsh may soon be consulting more often with those two.

The Air Force Times and The Washington Times, citing unnamed U.S. and Air Force officials, have reported that Welsh is the leading candidate to be the service&rsquo;s next chief of staff.

When asked about the prospect, Welsh said: &ldquo;I&rsquo;m not consulted on this and I have no vote.&rdquo;

&ldquo;No matter what I do next or don&rsquo;t do next, I&rsquo;m going to continue working with the greatest men and women on the planet; my wife&rsquo;s still going to be the most beautiful woman I know; my kids will still love me, and my dog will always be waiting when I get home.