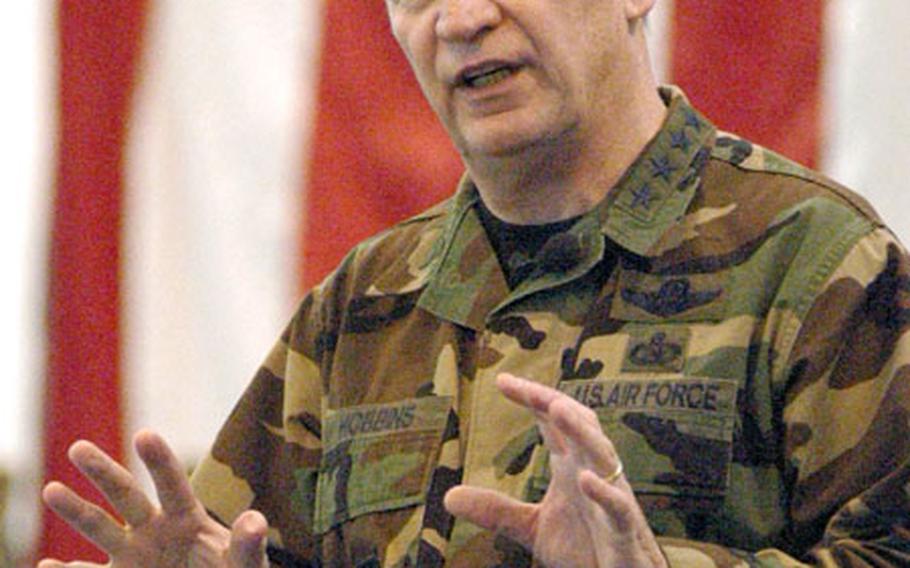 Gen. Tom Hobbins, commander of U.S. Air Forces in Europe, told thousands of assembled airmen at Aviano Air Base, Italy, on Thursday that the service’s planned reduction might not be as steep as previously announced. (Kent Harris / S&S)

AVIANO AIR BASE, Italy &#8212; The top Air Force officer in Europe told thousands of assembled airmen Thursday that the service&#8217;s planned reduction might not be as steep as previously announced.

Gen. Tom Hobbins, commander of U.S. Air Forces in Europe, said the service may decide to keep about 13,000 of the roughly 40,000 slots it planned to cut in order to pay for things such as new aircraft.

Echoing comments expressed by Secretary of the Air Force Michael Wynne in the same hangar a few weeks earlier, Hobbins said the Air Force needs to replace more than 100 aircraft it has lost in the last several years. And personnel cuts will have to be made to do that.

However, Maj. David Small, spokesman for the Air Force based at the Pentagon, said the service has not made any official reductions in the planned cuts.

In a phone interview hours after Hobbins&#8217; comments, Col. Susan Strednansky, chief of public affairs for USAFE, said Hobbins was stating his opinion on what might happen while talking to his troops in a commander&#8217;s call. She said Congress ultimately has the authority to determine the service&#8217;s end strength.

Hobbins made the comments in response to an airman&#8217;s question about whether the Air Force would see a personnel boost similar to those reportedly set for the Army and Marines Corps.

USAFE is due to lose 3,471 positions, Hobbins said &#8212; slightly fewer than reported earlier. He said that in the future, bases overseas will be operating at about 90 percent manning (down historically from 100 percent) because of the personnel cuts and a shortage of funds for permanent change of station moves.

Hobbins said the service will also have to operate more efficiently and praised specific efforts at Aviano and across Europe that have already saved the service millions of dollars.

The service needs to figure out how to save time and money because there will soon be fewer people doing the same amount of work, he said. An airman at an average squadron in USAFE works a 51-hour work week, he said.

Those getting assigned to deployments downrange might not be working more, but could be assigned there longer, he said.

Asked if he thought the Aerospace Expeditionary Force rotation system was broken, Hobbins said he didn&#8217;t. But he admitted there were some problems, such as airmen from future rotations getting called on to fill current spots. He said he believed that would eventually be fixed by continuing to make more of the force deployable, which would add more airmen into the mix. He said he believed that the majority of airmen would continue to serve four-month rotations, but that airmen in additional career specialties would be called on to join others now serving six-month tours.

As for their tours overseas, Hobbins told airmen that they&#8217;d be staying at places such as Aviano for longer periods.

Hobbins opened his message to the airmen with a brief review of his recent trip to Afghanistan and then detailed specific efforts the command was making in places such as Africa and Eastern Europe.