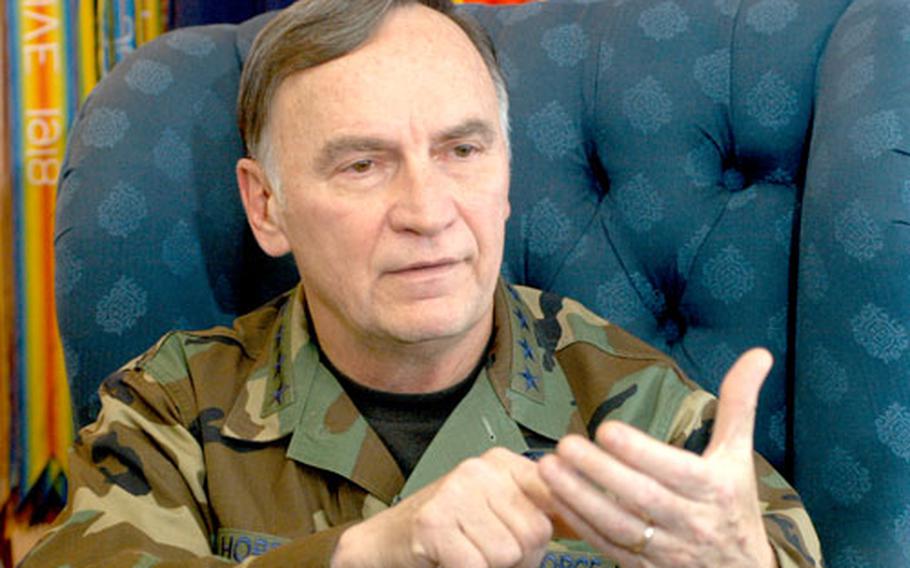 United States Air Forces in Europe commander Gen. Tom Hobbins gestures during an interview with Stars and Stripes in his office at Ramstein Air Base, Germany. (Michael Abrams / S&S)

RAMSTEIN AIR BASE, Germany &#8212; It might have appeared that Gen. Tom Hobbins took over the Air Force&#8217;s oldest major command on the tail end of a gargantuan makeover.

The U.S. Air Forces in Europe &#8212; which oversees roughly 26,000 airmen on the continent &#8212; had merged its two numbered air forces, ceremoniously handed over its busiest airlift base to Germany and made Ramstein and Spangdahlem air bases among the U.S. military&#8217;s two biggest airlift hubs.

But after a little more than 100 days in office, Hobbins hints that those changes might be just the beginning for the command and the airmen at its five main operating bases.

During an interview with Stars and Stripes, the commander discussed a future that could include more permanently stationed cargo planes, increased cooperation with the Army and a push toward missions and training in countries farther east and south.

The biggest change, however, might come in the form of more cuts to the size of the force in Europe. As the Air Force tries to slash 40,000 airmen from its ranks, Hobbins said USAFE would lose its share by finding ways to become more efficient. He said it is too early to know how many airmen could be shifted to the United States.

The Air Force has about 41,000 active-duty, Reserve and civilian employees stationed at the main operating bases and 80 smaller installations. While it will continue to keep major bases in Germany, the United Kingdom and Italy for years, Hobbins said he would like to see units in Europe be &#8220;a lot lighter, a lot leaner.&#8221;

USAFE headquarters at Ramstein could be among the first major commands to achieve some cuts by combining departments such as civil engineering, logistics and accounting with Pacific Air Forces in Hawaii.

&#8220;You could take some of those people out of headquarters, move them to the United States, and put them in a central organization that could then do all the work not only for USAFE but for the Pacific as well,&#8221; Hobbins said.

While the headquarters might lose some staff members, Hobbins said he would like to add cargo planes. The command&#8217;s main mission has revolved around the use of fighter plans. But over the years, airlift has become increasingly important.

Due to that shift, Hobbins would like to bring the new C-130J aircraft to Ramstein around 2009 as planned. The planes can carry more, airdrop more and fly farther than the current C-130 fleet, he said.

He also would like to add a C-17 squadron to help airlift troops and supplies across the command&#8217;s area of operations &#8212; which consists of 91 countries and three continents.

One main reason for planes with greater range, he said, is so the Air Force can support a lighter and faster Army force.

As the Army shifts to conduct training and missions at small bases in Eastern Europe such as Romania and Bulgaria and tiny, temporary outposts across the African continent, the Air Force will be right there with them, he said.

The top Air Force officer in Europe would like to take something most airmen would enthusiastically give away: overtime.

Gen. Tom Hobbins, commander of U.S. Air Forces in Europe and the 26,000 airmen stationed on the continent, wants to improve efficiency to the point that airmen can work fewer hours and have weekends off.

During an interview with Stars and Stripes, he said overtime is one of the things he wants to &#8220;attack right off the bat.&#8221;

Hobbins, who served as the director of operations at USAFE between 1998 and 2000, said he learned from his last tour in Europe how important it is to maintain a proper balance between work and personal life.

&#8220;I can remember getting off the plane in 1998 and getting back on the plane 2000 after my tour as a director of operations and not having seen much of the countryside because I spent the whole time working on the war in Kosovo.

It is difficult to determine how many extra hours airmen work a week because servicemembers typically don&#8217;t punch a timecard and don&#8217;t get paid overtime, said 1st Lt. Elizabeth Culbertson, a USAFE spokeswoman.

Cutting the number of work hours might be difficult while the Air Force is trying to trim personnel from the ranks and the U.S. military is fighting the war on terror and an insurgency in Iraq.

But Hobbins said he believes if commands in Europe can improve how they accomplish the mission, airmen won&#8217;t have to work as many hours.

&#8220;So, if we become much more efficient and I can cut some of that overtime down, then I can give people their weekends back,&#8221; he said.