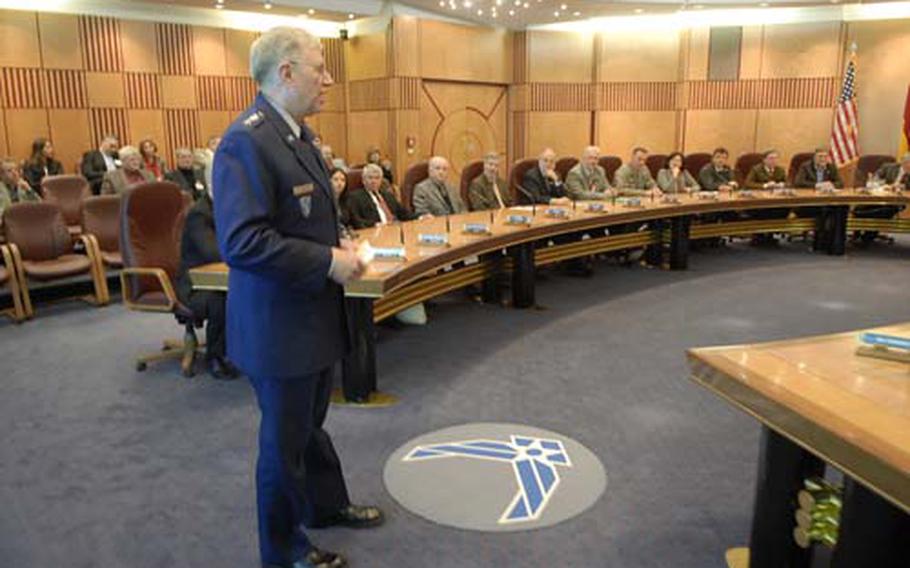 Gen. Roger Brady, U.S. Air Forces in Europe commander, hosted German politicians from western Rheinland-Pfalz and Saarland on Wednesday to discuss USAFE’s mission and aircraft training requirements and to answer questions and hear concerns from his guests. Many local officials wanted to talk about aircraft noise and what the Air Force is doing to mitigate it. They said they appreciated the opportunity for open dialogue but would like noise to be reduced further. (Jennifer H. Svan / S&S)

RAMSTEIN AIR BASE, Germany &#8212; Given the ear of Gen. Roger Brady, local officials, from village mayors to state lawmakers of western Rheinland-Pfalz and Saarland, didn&#8217;t hold their tongues, even though what they really want is quiet.

Aircraft noise dominated talks Wednesday between the Air Force&#8217;s top leader in Europe and his 50 or so guests during a roundtable discussion at U.S. Air Forces in Europe headquarters, marking the first time the USAFE commander had hosted so many German politicians at once.

In a country that values tranquility so much so as to ban lawn-mowing and car-washing on Sundays, military aircraft noise continues to be a nuisance, the bureaucrats complained.

Brady, with patience and humor, listened to their concerns for more than an hour. One of the goals behind the event was to thank local officials for their support and give them a chance to ask questions, according to USAFE staffers.

But it was also an opportunity, USAFE officials said, to share the command&#8217;s vision and mission &#8212; and how the latter drives training requirements &#8212; throughout Europe and at Ramstein and Spangdahlem air bases in Germany.

The four-star general pointed to drastic reductions in the number of planes based in Germany over the past two decades; specifically, U.S. combat aircraft assigned to Germany has dropped to 174 from 717 since 1990, according to figures presented Wednesday.

The politicians chuckled, but later turned serious when the floor was theirs.

Most agreed that over the past eight years much has been done to reduce U.S. military jet noise in the region, but problems remain, some said, from the loud drone of aircraft ground noise to something as subjective as people&#8217;s perceptions.

"Since there are not so many fighter jets flying around anymore, jet noise that can be heard here and there appears to be much worse than it actually is," said Bertram Fleck, a district administrator from the Rhein-Hunsr&#252;ck region. "The population has become more sensitive to noise."

Margit Mohr, a member of the Rheinland-Pfalz state parliament, said on some Sunday mornings, if the wind is from the east or west, she can hear ground noise from aircraft engines at Ramstein from her home in Bruchm&#252;hlbach, about 10 miles from the base.

"It has been awhile since we were talking with the U.S. side about hush houses, but nothing really happened," she said in a phone interview Thursday.

Air Force officials said Ramstein has one hush house big enough for a single engine, but not an aircraft. There are currently no plans to build additional hush houses, they said.

Brig. Gen. William Bender, 86th Airlift Wing commander at Ramstein, said the wing has taken steps to mitigate aircraft ground noise, such as putting up noise-reducing fences in some areas, eliminating engine runs on one ramp, and paying attention to prevailing winds and weather conditions.

Brady assured the group that the Air Force is sensitive to the noise issue, using a variety of air ranges to spread the noise impact, and increasingly going outside the country for training.