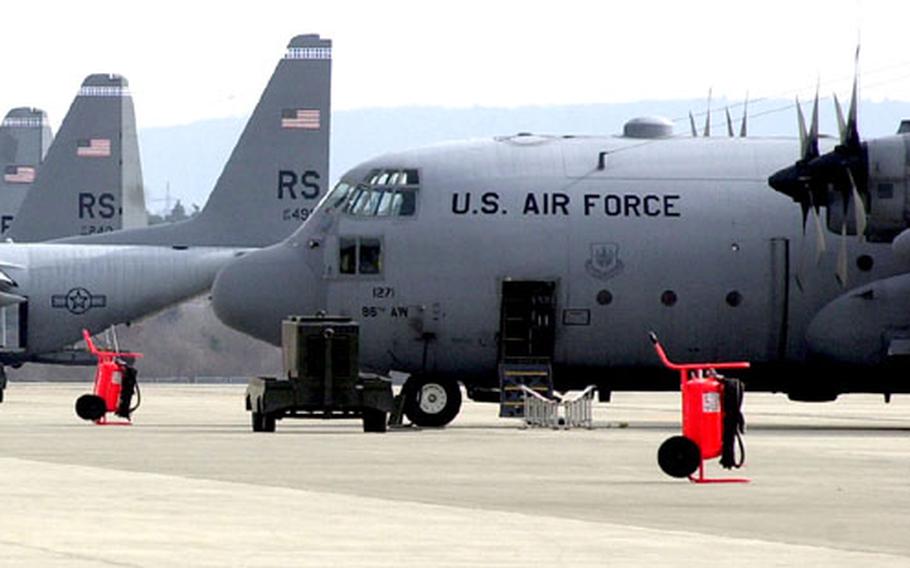 C-130 Hercules airplanes of the Ramstein Air Base, Germany’s 86th Airlift Wing sit on the tarmac at the base in March. (Michael Abrams / S&S)

C-130 Hercules airplanes of the Ramstein Air Base, Germany’s 86th Airlift Wing sit on the tarmac at the base in March. (Michael Abrams / S&S) 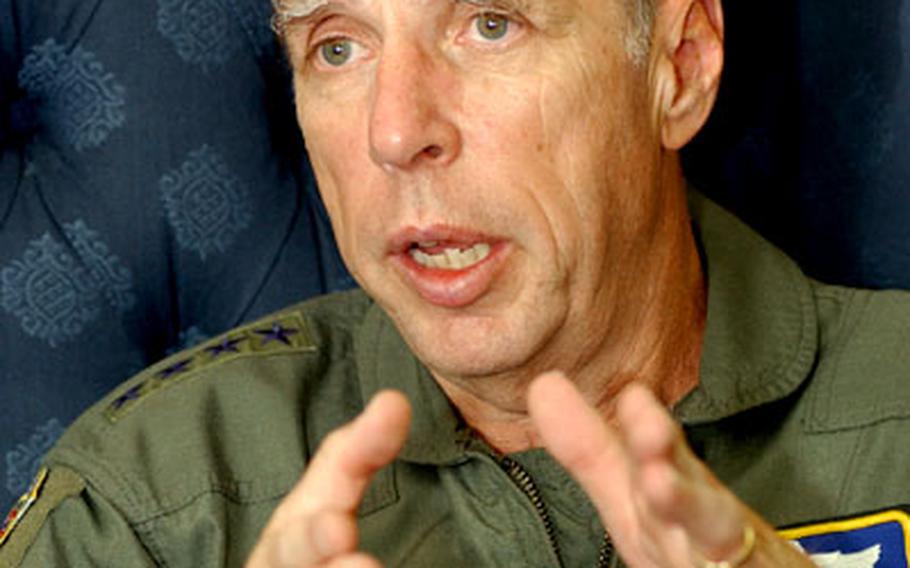 The changes are meant to sharpen the focus on the base&#8217;s primary missions &#8212; combat operations and support operations, he said.

After the restructuring, the 86th Airlift Wing will focus on tactical airlift, humanitarian operations and contingency operations. It will be under the command of a colonel.

A newly created 435th Air Base Wing will support all the base&#8217;s tenant and associate units and more than 40,000 American military members, civilians and dependents in the Kaiserslautern area, Foglesong told Stars and Stripes in an interview.

He added that the 435th will be commanded by a brigadier general.

Ramstein is a key airlift hub for operations throughout the U.S. European Command and the U.S. Central Command.

It also is a crucial way station for ill and injured servicemembers coming from current operations in Afghanistan and Iraq. From the base, patients are moved to nearby Landstuhl Regional Medical Center for treatment.

Under the current setup, Brig. Gen. Erwin F. Lessel III, the 86th Airlift Wing commander, is in charge of both combat and support missions, as well as the Kaiserslautern Military Community.

But the wing reorganized in 2002, growing from eight groups to 10.

Lessel said Tuesday that he welcomes the change.

&#8220;The biggest challenge for a commander is the span of control &#8212; having so many commanders working for you and such a great responsibility,&#8221; he said. &#8220;I think each wing having a wing commander and a vice wing commander that can dedicate all their time, energy and focus into a specific mission will benefit both organizations.&#8221;

As part of the USAFE reorganization, officials will activate the 420th Air Base Group at RAF Fairford, England. The base is a major contingency site for B-1 and B-52 bombers and U-2 spy planes.

As it&#8217;s now configured, the 86th Airlift Wing is the largest in the Air Force with 10 groups. Most Air Force wings have four groups.

Under the reorganization, the 86th Airlift Wing will retain three of its current groups &#8212; the Operations, Maintenance and Contingency Response Groups &#8212; and gain one new one: the Air and Space Communications Group.

&#8220;We&#8217;re putting all the combat capability into the airlift wing &#8212; all the aircraft, the maintenance to support it and the CRG &#8212; which deploys first to set up airfields, and the combat communication capability,&#8221; Lessel said.

The remaining groups will become part of the 435th Air Base Wing, which will focus on support to the community, including 125 associate units, such as USAFE headquarters, Headquarters Allied Air Forces North and the 723rd Air Mobility Squadron.

Currently, the 86th Airlift Wing commander also is responsible for five Air Force and 10 Army installations in the Kaiserslautern area, along with fostering ties with local mayors and the German community. Those jobs will fall entirely to the 435th commander now.

While some people will be moving into new slots, no additional personnel is expected as a result of the changes, Lessel said.