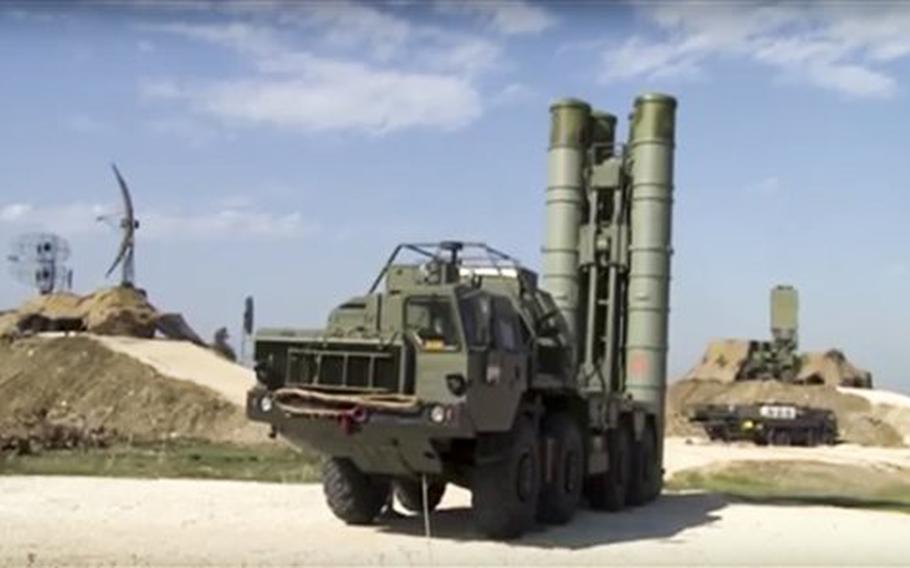 Gen. Frank Gorenc, commander of U.S. Air Forces in Europe-Air Forces Africa, answers questions during an interview at Ramstein Air Base, Germany, on Wednesday, Dec. 9, 2015. Gorenc discussed plans for continued use of rotational forces to augment permanent forces in Europe and Africa. (Michael B. Keller/Stars and Stripes) Gen. Joseph Dunford, chairman of the Joint Chiefs of Staff, answers questions during an interview at Ramstein Air Base, Germany, on Wednesday, Dec. 9, 2015. Dunford is traveling to several countries to speak with troops. (Michael B. Keller/Stars and Stripes)

“I think the proliferation of A2/AD (anti-access/area denial) environments in Europe is probably my No. 1 concern,” Gen. Frank Gorenc said Wednesday in an interview with Stars and Stripes.

Anti-access/area denial uses a combination of weapons, such as surface-to-air missile systems, to prevent forces from entering or using certain areas, whether by air, land or sea.

Gorenc said Russia, with the increasing capability of its surface-to-air missile systems, has created these no-access zones in Crimea — which Russia annexed from Ukraine last year — and in the Russian enclave of Kaliningrad nestled between NATO allies on the Baltic Sea.

And “you can see the beginning of that going on in Syria now,” he said. “It’s developing. It’s clearly a method of making it very, very difficult to gain access and operate in certain areas.”

Gorenc has warned in the past that Kaliningrad-based missiles could extend well into Polish airspace and effectively shut down NATO reinforcements to the Baltics in a crisis.

The United States, he said, is working hard “to develop tactics, techniques and procedures to deal with it,” he said. “We need to be cognizant of it.”

As Russia shows no signs of relaxing its aggressive posture in eastern Europe and beyond, the U.S. Air Force will continue in 2016 to supplement air combat units based in Europe with rotational squadrons from the States to bolster the U.S. presence in the region, said Gorenc, who is approaching his third year as the commander of U.S. Air Forces in Europe–Air Forces Africa.

Two Air National Guard F-15 squadrons are scheduled to deploy to Europe next year, he said. Exact locations are still being determined.

Those deployments will be a continuation of the Theater Security Packages that began earlier this year, an influx of aircraft units from the U.S. to bolster the Air Force’s presence in the region amid the ongoing crisis in Ukraine. The rotations were paid for by the European Reassurance Initiative, nearly $1 billion in funding approved by Congress in December 2014 for additional training and operations on the Continent to reassure allies and strengthen partner nations’ capacities.

That infusion of funds has allowed the Air Force to augment a reduced number of permanent forces assigned to the Continent at a time of increasing hostility both in eastern Europe and the Middle East.

But whether those conflicts will force a reshuffling of the number of personnel and units assigned to Europe remains to be seen, Gorenc said.

“But I’ve always said that people forget that we have a Ph.D.-level expeditionary Air Force that is able to literally tap into any capability we need worldwide and bring it, based on need.”

Military leaders are reviewing those needs, said Gen. Joseph Dunford, chairman of the Joint Chiefs of Staff, during a separate interview Wednesday. Dunford was at Ramstein as part of a USO tour to U.S. installations in several countries.

In the meantime, Dunford said, he foresees more rotational forces will continue to be deployed from the United States to Europe. “I expect that’s the way we’ll meet our requirements over here is largely through rotational forces.”

So far, for the Air Force in Europe, using a mix of rotational and permanent forces to meet requirements has been working, Gorenc said.

But, clearly, he said, having forces assigned in Europe has advantages. A case in point was the deployment of combat aircraft from Italy to Turkey earlier this year.

Shortly after Turkey agreed to allow American planes to launch air strikes against Islamic State militants from Incirlik, the Air Force sent six F-16 jets and about 300 personnel from Aviano Air Base in Italy.

“Incirlik’s available, boom, we have aircraft going there,” he said. “The fact that we could do that, the only way you could do that, is with forward-based forces. You could certainly do it with rotational forces from the States, but it would take much longer.”

The airmen from Aviano were in their “dwell cycle,” meaning they were tasked for a deployment earlier than scheduled, but Gorenc said the deployment was kept to the shortest duration possible. “It was a stop-gap measure,” until a rotational force of A-10s from the states replaced them.

“That’s what’s so exciting to me,” he said, “the future with respect to permanently based force and rotational force. Will there be adjustments to that? I don’t know, but for now it’s working pretty darn good.”

While the Italy-based fighters have returned home, USAFE is continuing to directly support operations against the Islamic State. The current group of F-15E and F-15C jets deployed to Incirlik is based at RAF Lakenheath in the United Kingdom.

Funds from the European Reassurance Initiative allowed the previously scheduled withdrawal of those F-15 fighters from Lakenheath to be postponed.

“For now, they’re going to stay,” Gorenc said. “The F-15, what it provides, is very good for the situation that we’re in, particularly with respect to Russia. It’s purely an air defense fighter. It’s certainly nonescalatory in its use … and so we found very, very good use for the F-15C model” in Turkey.

Gorenc also said that despite the high operations tempo in Europe and the manpower shortage across the Air Force highlighted recently by Air Force Chief of Staff Gen. Mark A. Welsh III, airmen here are continuing to show they’re resilient and capable.

“Whether or not it’s sustainable is the issue,” Gorenc said. “Carefully and methodically, we’re looking at everything we’re doing to see if we can reduce the effect of manpower shortages and at least push back a burnout.”