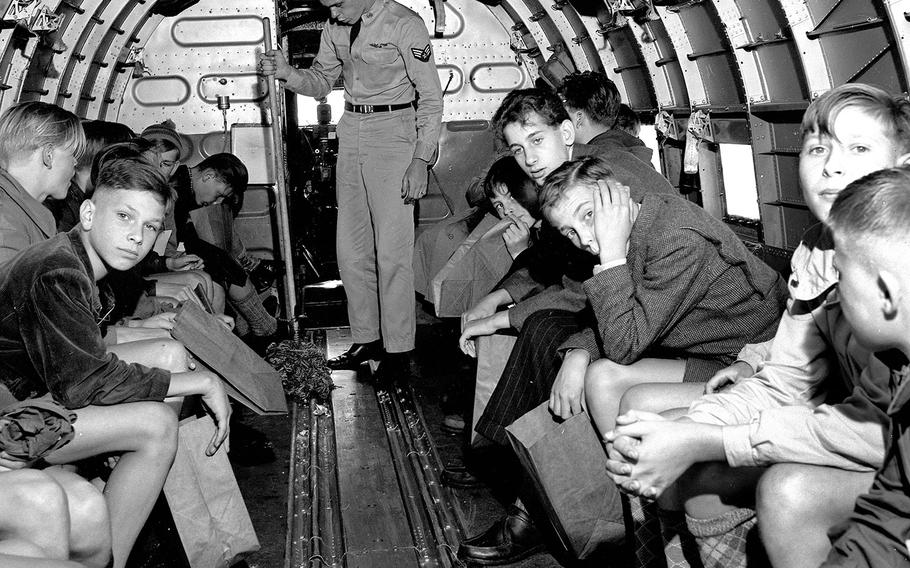 FRANKFURT, July 12 — From out of rainy, gloomy Berlin into cheerful skies over Frankfurt today came four USAFE plane-loads of children to mark the beginning of "Operation Kinderlift."

The four planes were a portion of the 12 which left Tempelhof Airdrome after appropriate ceremonies denoting the second year of the USAFE operation. In all, 288 children were flown out of the "island city," beginning at 2:30 pm. Four other planeloads went to Hanover, while two each went to Wahn Airport, near Bonn, and to Hamburg.

Additional Air Force planes will continue to operate on the project the next four days until a planned 1,440 children have been taken for summer vacations in West Germany.

Included among those on hand to greet the youngsters as they arrived at the Frankfurt airport were Lt Gen William H. Tanner, USAFE commander-in-chief, his wife, and their 19-month-old daughter, Suzanne.

In ceremonies welcoming the Berlin children, Maj Gen Thomas W. Herren, Northern Area Comd CG, said a portion of the children will stay at the Eschborn GYA camp in the NACom area.

"Operation Kinderlift" provides summer vacations in West Germany, not only for Berlin children, but also for refugee, displaced, and expellee children from behind the Iron Curtain.

At the farewell at Tempelhof, talks were made by Brig Gen Royden E. Beebe, Jr., USAFE assistant chief of staff for operations, and Dr. Walther Schreiber, governing mayor of West Berlin.

Beebe said the Kinderlift "shows that the strength of our United States Air force does not lie wholly in its military capability. This operation can serve, in a small way, as proof of the benefits of international cooperation and goodwill."

Prior to the speeches, music was provided by the world-famous Air Force Band. As Beebe ended the concluding speech, the, children piled into the planes to the strains of "Auf Wiedersehen," sung by the band's "Singing Sergeants."'

Many youngsters weren't quite sure whether to laugh or cry as they stood about, their faces well-scrubbed and clothes sparkling clean.

It took time to separate the 288 chosen youngsters from their brothers and sisters and herd them together into one group to he counted.

They stood about waving miniature Red Cross flags as they searched for the face of a mother or dad in the group behind a rope barrier.

Most of them forgot their fears and homesickness however, once aboard the planes — although the plane ride made some ill.

On the whole, the youngsters were well-behaved and gave no trouble when told to sit quietly in their seats and to fasten safety belts. On each plane was a German Red Cross nurse.

Three planeloads which arrived at Frankfurt Airport were to go to the Eschborn camp, while one planeload was to be distributed among individual families.

On hand to pick up one 6-year-old German youngster dressed in a Bavarian costume and hat was Sgt Robert L. Myers of the 1363d Photo Flight. He and his wife have a 4-year-old boy.

Other officials in attendance at the Berlin ceremonies, during which the Tempelhof choir also sang, were Cols Myles W. Brewster, commander of Wiesbaden Area Comd; and Roy L. Jones, commander of Tempelhof Air Base.

On hand also to greet the incoming planes at the Frankfurt Airport were Col Harry S. Bishop, commander of Rhine-Main Air Base; Dr, Leisler Kriep, president of the German Red Cross for Land Hesse, and representatives of the city of Frankfurt.